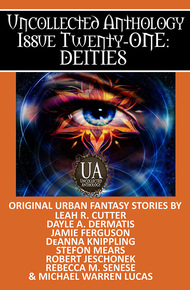 Redefining the boundaries of urban and contemporary fantasy, Uncollected Anthology brings readers new themes and stories three times a year from some of the best authors writing fantasy today. The project is in its sixth year and invites a talented guest author each issue.

Enjoy the urban fantasy stories of the Uncollected Anthology: Deities now collected in this bundle.

Search for missing gods or do some job hunting. Leave the window open for a brother bird god and be sure to protect an artifact. Use your credit and sacrifice it all for your warrior self.

Explore the Uncollected Anthology with Deities!

The Uncollected Anthology came about so that authors could write on the same topic in a way most suited to ebook readers. If you sign up for the Uncollected's newsletter, you'll get notified when a new anthology is out. Then you can download all or some of the stories, depending on your taste. This collection of the Uncollected is a great introduction to a truly fascinating urban fantasy series. – Kristine Kathryn Rusch

From "A Better Place" by Jamie Ferguson

I'm the last of my kind.

We used to be many. Every dell, mountain, and river had its own god or goddess. I had my own spot: a spring deep in the woods, where clear, cold water bubbled up from far beneath the earth. Offerings were made to us: jewelry, weapons, food, and wine. We were worshipped. Loved. Beloved. Our people gave us the best of everything, knowing that in return we would heal them, protect them, and empower them.

We each had our favorites. One of mine was a dark-haired young man with eyes of amber who carried a wooden shield into which he'd carved his father's name, after his father had been killed by the Danes who swarmed down the emerald lands of Éire from the north. Sometimes I'd greet him dressed in robes of gossamer, the outline of my breasts unmistakable through the light fabric; sometimes I'd wear nothing but my long, dark curls. There are many ways to demonstrate your respect to a goddess, after all.

Gilmach, the god of a nearby valley, dallied with generations of blonde, green-eyed women from the closest village. Sia preferred to be left alone, but seemed pleased when the occasional mortal made the trek up to the top of his mountain peak. Liame and Marlia, both river goddesses, had their devotees build a small temple at the confluence of their two waterways. Each of us had our own preferences, our own desires, and our own ways of interacting with our followers. We granted boons, passed judgment, sent our worshippers on quests. Each of us enjoyed being revered, loved, pleaded with, and prayed to.

But over time, without realizing what we were doing, we gave away too much power.

It started small, as such things do. An enchanted shield, or spear, or a goblet that, when filled with mead, would cause whoever drank from it to have the strength of ten men. A necklace or brooch of precious stones that would enhance the beauty of the wearer, or make their speech more eloquent. A talisman to make the holder more intelligent, protect them from harm, or fill them with bravery.

These things seemed innocuous, at first.

As such things do.

Then one of us went a little too far. And then another.

I don't think I did.

Although I may have.

I will never know for sure.

Slowly, so slowly none of us noticed until too late, the world changed. We'd given away too many gifts, transferred too much of our power, and were no longer needed as we had been in the old days. The people, who for millennia had asked for our blessings when they were sick, or old, or frightened, stopped coming to worship us, the tributes they'd brought dwindling to a mere trickle, and then to nothing at all. I'd go years without receiving a single offering. Then decades. Then centuries.

When we did have visitors, those encounters too became different. Instead of someone coming to express their adoration, or beg one of us to grant a boon, the requests took on a more demanding tone. There was a clear expectation that we had to deliver whatever was asked, or the supplicant would stop believing in us—if they even truly thought we existed in the first place.

What kind of existence is it for a god or goddess if no one believes you?

I don't know what happened to my fellow deities. We are immortal… Aren't we?

And yet… I haven't heard from any of them for a long, long time, so many years I fear to count them.

I am Birghda, goddess of the spring Licurgha, which lies nestled in the hills deep within the land of Éire.

And I am alone.