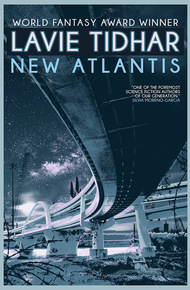 When a mysterious message arrives from vanished New Atlantis, a restless Mai undertakes the perilous journey to its drowned isles. But the journey is long and hard: through the Blasted Plains and the ancient cities of Tyr and Suf, through shipwreck and wilderness.

For this is a world where ants develop inexplicable weapons, where a lonely robot lives surrounded by cats in the ruins of old Paris, and where floating coral islands host sleeping sentience. Mai's journey takes her by land, sea and air to the islands of New Atlantis, and to the nightmare prison buried underneath old London.

On her way she will find heartbreak and love – and a new life, awakening.

I couldn't resist including my latest e-book here – and New Atlantis is currently on the shortlist for the Theodore Sturgeon Memorial Award. I was inspired to write it by the works of the Korean novelist Pak Kyongni, when I had the opportunity to stay at the writers centre she founded in the mountains near Wonju. – Lavie Tidhar

It had been a cold and shivery winter and I had been restless through much of it. The fog lay heavy on the Land in nighttime, and the yellow light of the broken moon struggled to illuminate the landscape through it. I took long midnight walks through the silent Land, observing spun spider webs glittering with tiny drops of dew like hardened diamonds, and snails that communicated silently with each other in the mulch of leaves, their retractable tentacles raised in complex greeting.

Ants whispered softly through the forest, marching across fallen pine needles, over the raised roots of ancient trees. In the stream that ran beyond our homes, the eels slithered through the water on their way back to the distant sea. All was quiet, but for the faraway call of a migrating cormorant. The birds traveled to our shelter in winter, but left again in the spring, to go north and west. I was restless, desirous of something I could not put a word to. An irritability I was unable to shake off drove me through much of that winter, and my father took to finding shelter in his library, where he pored over ancient manuscripts my mother had salvaged for him in the ancient cities of the coast. Turning the pages of an illustrated atlas of the old world, he'd glare at me over the glasses perched on the bridge of his nose. "What you need," he'd say, "is a purpose, Mai. And stop stomping quite so much! I can barely hear myself think."

"But I don't!" I'd say, and stomp my feet, the way I had when I was little, and he'd soften at my frustration and smile his old smile and say, "Would you like me to tell you a story?"

My mother, the salvager, ever practical, had a use for maps only if they were current. Salvager maps were makeshift, continuous works-in-progress. They marked known nests of wild machines, where a river had shifted, where a new road had been hewn, where there was danger, where there was salvage. My father, by contrast, dreamed of the world as it had been, not as it was. For hours he would trace winding blue paths on the ancient maps, and speak to me in the language of long-vanished waterways: "Bosporus, Mother Volga's Watershed, Pearl River, the Lower Blue Nile…"

My mother salvaged scrap and debris, anything from the old world that could be repurposed. She was a stoic, practical woman. She hated waste. My father, by contrast, was a man given to daydreams and stories. He was endlessly fascinated by those missing decades, by the centuries before them, that glittering time of consumption and excess, when the roads were laid all across the flesh of the Earth and a billion petroleum-fed travel-pods crawled like fat beetles along them. Only their scars were left to us.

I stayed restless all throughout that winter. I tilled the soil in the fields and helped Aislinn Khan, Mowgai's mother, in the bakery, enjoying the warmth of the oven and the silence of the predawn night that lay as thick as a blanket over the houses and their sleeping inhabitants. I helped Elder Simeon oil the gears of the small mill on the brook, surrounded by his pets: tiny, intricate clockwork automata of ducks and geese, a peacock, a cat, a turtle. From the mill I could look out to the low-lying hills beyond the brook, past Elder Simeon's house, where as children Mowgai and I would imagine they formed the shape of a vast, reclining manshonyagger, a buried giant forever sleeping, a snatch of nightmare from the old age.

I waited, for what I didn't know. Perhaps for spring. Mowgai was a salvager now, and he and the others were gone with my mother, to the Blasted Plains, to the ruined cities by the coast.

I read old books, I played backgammon and bao and cap sa with my neighbors, I dug fleshy cyclamen bulbs out of the soil to replant, and drove my father deeper and deeper into his study. I had just come off three years in New Byblos working on the Extinction Lists, and off a relationship I had thought would last, but didn't.

It was on a day such as this, the air still cold in the shade but the sun warm, and the air filled with the fragrance of spring, that I saw a familiar bird shape circle in the sky overhead. It was a gray spot against the sky, and as it descended, I recognized it as Hornbill, a wild drone Mowgai had rescued from a malfunctioning replicator nest in the Blasted Plains and raised as his own. It was far into its life cycle by this time and spent much of its days nestled unmoving as it absorbed sunlight, but I knew how attached Mowgai was to it.

If it was here, Mowgai and the other salvagers couldn't be far behind.

Hornbill spotted me and gracefully descended. It opened its vicious-looking beak and Mowgai's familiar voice emerged. The message was brief and addressed to me. It said they were on course for return but were still two or three weeks away. I could hear wind behind them, the crying wail of wild dogs far in the distance, the rattle of shifting pebbles underfoot. Mowgai sounded tense, yet I could imagine him smiling. I smiled on hearing his voice, in the happiness of recognition.

"Mai…" He paused there. I heard my mother's voice in the background, saying something I couldn't decipher, and Old Peculiar's grunt in reply. "There's been a message for you."

That pause again, the hiss of wind. Hornbill blinked at me, his mottled gray hide thickening to black as it began to power down. The old machine was tired. I tried to think of who would contact me. For a moment I thought of Ifrim, back in Byblos, and felt a pang of loss.

"From beyond the sea." I could hear exhaustion in his voice. "Meet at the way station."

Then the sound faded, and the old drone powered down, trusting me to carry it. I returned to my parents' house, left Hornbill to nest on the roof, and went inside to hunt for my father in his library.

"Beyond the sea?" my father said, doubtfully. He brewed us tea, fresh sage leaves and just a hint of honey in the water. We watched the rain outside, but it was a final gust of winter, and I could see new shoots on the plants, and the flowering trees. I could smell the coming spring, as though the Land and everything upon it were holding their breath in delighted anticipation. It was the season of rebirth, of joy. "What is there beyond the sea?"

"There are other places than these," I said. I paced around the room. I hated mystery. Or did I? My father looked at me and shook his head.

"You've been like a caged bird all winter," he said.

"Then perhaps it is that you, too, should fly," he said, and smiled, and blew on his tea in the way that had always annoyed me, even as a kid. He took a sip, and kept the smile, and I was forced to smile, too.

"Francia, Albion…" he said musingly. "Or does the message mean Afri? Misr, Carthage…"

"Your geography is as muddled as your history," I said, laughing. But the truth was that I longed to go—somewhere, anywhere. The restlessness I'd felt all winter had vanished, and in its place came a clear, pure determination.

My father took another sip of his tea and looked up at me with guileless eyes.