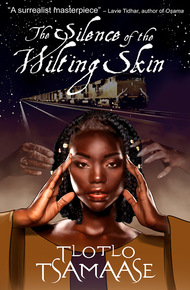 Tlotlo Tsamaase is a Motswana writer of fiction, poetry, and architectural articles. Her work has appeared in Terraform, Apex Magazine, Strange Horizons, Wasafiri, The Fog Horn magazine, and other publications. Her poem "I Will Be Your Grave" was a 2017 Rhysling Award nominee. Her short story, "Virtual Snapshots" was longlisted for the 2017 Nommo Awards.

In an African city, a nameless young woman living in the wards slowly begins to lose her identity: her skin color is peeling off, people are becoming invisible, and the city plans to destroy the train where they bury their dead.

In the wards the dreamskin people walk the land to predict a citizen's death. After the narrator is given a warning by her grandmother's dreamskin, things begin to fall apart. Struggling to hold onto a fluctuating reality, she prescribes herself insomnia in a desperate attempt to save her family.

In an African city, a nameless young woman living in the wards slowly begins to lose her identity: her skin color is peeling off, people are becoming invisible, and the city plans to destroy the train where they bury their dead.

In the wards the dreamskin people walk the land to predict a citizen's death. After the narrator is given a warning by her grandmother's dreamskin, things begin to fall apart. Struggling to hold onto a fluctuating reality, she prescribes herself insomnia in a desperate attempt to save her family.

Tlotlo Tsamaase's work blew me away when I first came across her short stories, and I was over the moon to discover she was publishing her first book. The Silence of the Wilting Skin packs a lot into its slim size. It's a surreal, fantastical tour de force by this Motswana author, and I hope the start of many more to come. – Lavie Tidhar

My Girlfriend was born on the train a week after her mother died.

"Trust no man without a shadow," my grandmother used to say. "If shadows are felled from their owners it means the body is vacant of a spirit. Something felled them."

We have a train station that no one boards in our wards. It's decrepit and takes its specific passengers to and fro—somewhere. Somewhere no one wants to go. My dead grandfather always has his palm against the window, a silent wave, trying to catch us in our adolescent growth. My still-born brother wavers next to him, slumbering on a hammock-like cushioned chair hanging from the rail. He is grey-skinned with dark-brown eyes so beady with aliveness it pains my heart. There are about five dead in our family and we're still counting. My boyfriend is huddled next to them, holding them. He still carries that quiet expression with him, an expression that has slain itself as a martyr for someone.

I prefer to only see my family dead, for we see them in their true identities. The only time we ever become us is when we're dead; when we're dead we become the still-Black font of sky. My dead family calls the color on them still-Black hoping it will still itself onto our bones. But we don't refer to them as dead to their face, they are still here, they are still a part of us, more than we could ever be.

From our window, the fields are a wisp of green, a railway line stitched across them. We can see it in the distance from our balcony using our telescope. You can't be near the dead without catching their fever. "The graveyard opens early today," my brother says, walking into the living room with a limp in his left leg. He holds a tray of tea for Grandma. "We should get there early to avoid long queues."

"That's the perfect time. The night guard will be on his shift and might give us tea, phaphatha and a warm place to hold up in," Brother says.

"I haven't finished knitting this for my brother," I say, lifting an untold fabric. "I will be done in a few hours."

"He is dead," Brother says. "He doesn't actually get the chills. Better give that to Grandma. You know how she can't bear the cold. She wants to get an early night so she's not tired for our visitation in a couple of hours."

"Mxm, whatever, just stop making me feel guilty," I say, clicking my needles against each other as I thread yarn through them.

"The fare has doubled—"

"Again? What the hell. It went up last month. I don't think washing dishes is going to cut it anymore," I say, banging my fist against the table. "And we still have last month's rates to pay."

"If we don't pay, they're just going to relocate our dead relatives to some Satan-worshipping asshole who will make them work menial jobs with dithokolosi."

"Eish, please. Like, you don't need to remind me. We're seeing our grandfather tomorrow! He's going to have questions, and I don't want to lie to his face again this time. I swear they will drag him out the train this time and he'll be slaving around for those evil things. And you? Where's your money?"

"Having a kid is expensive," Brother says, staring at the tea getting cold.

"Having dead relatives is, too," I say. "So, where's the rest of your money?"

"I had to reinvest it into the company—"

"I'm not going to chew on that shit anymore like it was some goddamned bougie meal. I swear I'm going to make your girlfriend throw up whatever money you fed her. Or shit it out. One way or another, I'm getting that money out of her."

"Fine, geez, I'll figure something out."