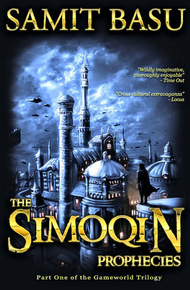 Samit Basu is the author, most recently, of Chosen Spirits, a near-future anti-dystopian novel. He's also known for the Gameworld trilogy of fantasy novels, the Turbulence series of superhero novels, and the Adventures of Stoob series of children's books. He's written bestsellers, won awards, and been published in multiple countries and languages. Basu is also the co-writer/director of a Netflix film, comics writer and columnist.He also runs Duck of Dystopia, a creativity/recommendations/updates newsletter.

The Simoqin Prophecies by Samit Basu

The Simon Prophecies foretell the reawakening of the terrible rakshas, Danh-Gem, and the arrival of a hero to face him. But heroes do not appear magically out of nowhere; they have to be found and trained. And sometimes the makers of prophecies don't know everything they need to know…

As the day of Danh-Gem's rising draws closer and the chosen hero is sent on a quest, another young man learns of terrible things he must do in secret and the difficult choices he must make in order to save the world from the rakshas.

Featuring flying carpets, pink trolls, belly dancers and homicidal rabbits. Monty Python meets the Ramayana, Alice in Wonderland meets The Lord of the Rings and Robin Hood meets The Arabian Nights in this novel—a breathtaking ride through a world peopled by different races and cultures from mythology and history.

What is Samit Basu not good at? He's done comics, children's books, superhero novels and just when you thought you had a measure of him he went and directed a Bollywood movie for Netflix. Truly there is nothing Samit cannot do, and do well. The Simoqin Prophecies is a ground-breaking Indian fantasy novel from the ever inventive Samit, and word is a film may not be far behind... – Lavie Tidhar

Somewhere in the desert of Al-ugobi, the great sand-sea that covered most of western Artaxerxia, a solitary traveler and his camel struggled through a blinding storm. The young man's name was Hasan. He was sixteen years old, and had set out with his camel to seek his fortune out east, in Amurabad, the Artaxerxian capital. His brother, Ali, had left a year ago, to be an actor. It had been a whole day since the last oasis, the sun had been shining as if it had a personal grudge against him, and Hasan was already thoroughly sick of life in general and sand in particular.

The great dunes were shifting slowly, and the air was full of hard, biting, blistering sand. As Hasan crouched, he saw a sudden flash as something glimmered golden and was hidden again. Hasan ran to the dune, heedless of the stinging sandstorm, and plunged his hand in.

The jinn awoke. It was suddenly very hot. Yes, something was deliberately rubbing the walls of its lamp. It yawned. It wondered how long it had slept. Strangely enough, this time it didn't even remember going to sleep. That was odd. The last thing it remembered was watching a particularly good belly-dancer in Amurabad. Well, time to get up, it thought.

Hasan rubbed harder, the sandstorm completely forgotten in his sudden, wild joy. A jinn-lamp! This was the stuff dreams were made of! Everyone said a jinn-lamp hadn't been seen for hundreds of years! Hasan saw the future. He saw an almond-eyed, veiled princess – why one, a hundred! – gold, fame, scimitars, subtle wines, flowing silk robes, flying carpets, pliant, amazingly beautiful and barely clad belly-dancers surrounding him and pressing ripe grapes into his mouth as music played and he lay back on soft, soft cushions…

'What?' asked the jinn, rubbing its eyes.

Hasan looked at it. He'd expected a jolly, fat man with a curly beard and a big turban who would start singing songs about how he would be Hasan's best friend. The jinn was…well, it didn't look very friendly, for a start. It was a shape, a large, muscular shape, trailing off into smoke near the mouth of the lamp. Sand blasted into it and gave it an outline, a large, muscular outline. Its eyes glowed a brilliant, blinding white. But Hasan didn't care what it looked like. He laughed aloud in excitement. Three wishes! What would he wish for?

'I suppose I can't wish for more wishes,' he said.

The jinn got used to the sand. It had been a long time. It noticed Hasan. Good-looking boy, though a bit thin, it thought. Not as good-looking as the little belly-dancer, though. The jinn preferred girls. They were prettier, softer, they smelled good, they fought less.

The boy was saying something.

'Wishes?' asked the jinn. It noticed the camel. Camel bones were good…

The jinn thought for a while. 'Why?' it asked.

'That's what jinns do! Don't you know that? Everyone knows that!'

Three wishes, thought the jinn. What was he talking about?

The camel took a look at the jinn. It started to run.

'I don't know what you mean,' said the jinn. 'Why would I want to grant you three wishes?'

'I freed you! From the lamp!' Hasan looked around wildly for his camel. It was gone.

The jinn had had enough of this nonsense. Freed him from his own lamp, indeed! It flew up in the sky, caught up with the running camel and ate it.

It was still hungry.

It looked around, found Hasan, wide-eyed and trembling, trying to hide behind a dune, and ate him too.

Why? Why had the juicy boy wanted wishes?

Then it found the lamp – the handle was sticking out of the swirling sand – and flew inside. Time for a nice nap.

The dunes shifted again in the howling sandstorm. Sand covered the lamp.

Inside the beautifully carved golden lamp, the jinn was having trouble sleeping.

What wishes? Why wishes?

Another, very disturbing thought struck the jinn and kept it awake for a long time.