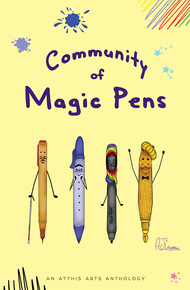 Atthis Arts is a small press out of Detroit Michigan that believes in the authentic and artistic voice of the writer as the core of our projects. They are primarily focused on speculative fiction and try to apply a thoughtful and community centered approach to publishing. Atthis Arts publications include novels, novellas, graphic novels, and short story collections, as well as middle grade and all ages fiction.

Fountain pens, markers and ink, charcoals, spy pens, a braille writer, a printing press, virtual reality, and a supernatural pizza: whether revealing unspoken truths, fighting injustice, or finding friendship and love, our pens have power. Join us as a recent graduate of superhero school struggles to understand her gift, a disabled android interviews for a job, a queen's conscripted artist must pull reality from illustrations on parchment, and a grandmother's secret room is…better kept a secret. Tales of struggle and triumph, compassion and hope: Community of Magic Pens is a celebration of our shared story.

The Magic Pens anthology is from Atthis Arts, and edited by Bell. Writers love pens of all kinds, because we know they help us write the sorts of stories that can change the world. This anthology presents a wide-ranging group of authors. – Cat Rambo

From Love in the Library by Robert Perez

The desert sun was setting over Javier's shoulders. He paced the creaking porch, kicking crumpled yellow wads of legal paper out of his way and sending them rolling like tumbleweeds. Tomorrow morning was his wedding day and he had yet to write his vows. Family and friends had converged upon a Spanish mission outside of San Antonio, Texas, for the event. A wing of the beautiful Mission Nuestra Señora Soccoro had been converted into a bed and breakfast and all of the rooms were currently checked out by the wedding party. Privacy to write had been impossible until the large group scattered for last-minute errands and sightseeing.

Javier was ready to pledge his heart until his dying day. His difficulty composing his vows wasn't in the promise of forever but in proving his conviction to his family. His parents had been together for over fifty years and would have front row seats. He knew he had his mother's unconditional support, but he wasn't so sure about his father. For many of his family members it would be their first time seeing Javier kiss a man. He wondered how many of them showed up out of genuine support or to verify rumors.

His mother, Linda, had been listening to her son's heavy tread through the open kitchen window for the last hour as she pet the missionary cat. She had intended to sit down for only a moment but her new purring friend decided to nap in her lap. She called Javier inside. "Mijo."

The screen door slammed shut behind him and Linda felt like she was home. The commotion startled the cat and it darted into the pantry where its golden eyes hovered in the shadows.

"Yes?" Javier asked, thick brows furrowed in concentration as he reread a sheet before him.

"They'll be coming back soon. Why don't you hide out in the library? La poesía puede ayudar."

Javier sighed and crumpled up his latest attempt. "To think I thought this would be easy! There's a fireplace in the library, right? Let me go gather my failures."

The handle of Linda's cane was carved into the head of a ferocious wolf with lapis eyes. Her wrinkled hand rested on the wolf and the blue of her veins coursed alongside the semi-precious snarl.

"I'll request some tea for us." Linda stood and waved away his assistance. "Meet you there."

The library smelled of sandalwood and tobacco; even though it had probably been decades since someone had last smoked in the room, the leather and the books were stained with the memory. Linda sat in a rocking chair by the flickering fireplace watching her son move around the library like a hurricane. She poured two cups of rose tea as Javier poured over the shelves.

"Dime que estás pensado, Mijo. I saw Alejandro try to nuzzle you before leaving but you were far away in your mind," Linda worried.

"He knows I love him," Javier said as he pulled a book off the shelf, "it's just. . . this performance for Dad and some of the others. I know they're watching us. I can feel their judgement even though they smile."

Linda rapped her nails over her cane. "Un lobo no teme a las ovejas."

An envelope fell from the pages of the book Javier was holding open. He bent to pick it up in wonder—eyes going wide at the scrawled date of December 16th, 1750.

"Mira! This was hidden between the pages," Javier said and handed the letter over.

From G.S., To C.J. Linda delicately unfolded the envelope and letter inside. To My Missing Heart. Though we may never be together I think of you always. Do you think of me? The same lips that kissed you now curse you. What have you done to me? Yearning is such sweet agony. I'll never forget the night we shared. I hope one day we meet again. – G.S.