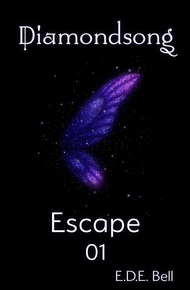 E.D.E. Bell (she or e) was born in the year of the fire dragon during a Cleveland blizzard. After a youth in the Mitten, an MSE in Electrical Engineering from the University of Michigan, three wonderful children, and nearly two decades in Northern Virginia and Southwest Ohio developing technical intelligence strategy, she started the indie press Atthis Arts. Working through mental disorders and an ever-complicated world, she now tries to bring light and love as she can through storytelling, as a proud part of the Detroit arts community.

A passionate vegan, radiant bi, and earnest progressive, Bell feels strongly about issues related to equality and compassion, and loves fantasy as a way to perceive them while offering our minds lovingly crafted worlds in which to settle. Her works are quiet and queer, and often explore conceptions of identity, community, friendship, family, and connection. She lives in Ferndale, Michigan, where she writes stories and revels in garlic.

Diamondsong is a high fantasy saga told in ten parts. For lifetimes, the Ja-lal have prevented contact with the dangerous fairies of the forest. As tensions grow, those barriers are beginning to crumble. Blending rich worldbuilding with progressive themes, Diamondsong is a tale of identity, relationships, and magic.

In Part 01: Escape, Dime has just left her career as a Ja-lal Intelligence agent, ready to roll her own dice. When, instead, she's accosted by winged invaders, some truths quickly fade—while others solidify. This unexpected tale of pursuit and discovery offers Dime the reality that her new path is not yet unencumbered, but she still has the choice how she will approach it.

In Part 02: Capture, Dime has discovered the startling truth about her history, and now she wants to know why. Determined to find and question the High Seat of the Fo-ror, Dime marches into the Heartland forest. In this fantastical tale of fairies, power, and secrets, Dime encounters an old friend, and learns that the answers she set out to seek have only complicated matters further.

E.D.E. Bell's Diamondsong is the entrance into a ten book series. I love the thoughtful world that Bell has constructed and her world has not just hope, but an innate kindness and gentleness to it that shimmers underneath the surface. It's also a book that deals with gender, exploring it in a way that is careful, considered, and nuanced. – Cat Rambo

"Oh, come here," she said to Dayn. "Your button is almost hanging off. We need to—"

As she took a step toward him, she heard a click from behind her. Dayn froze. Spinning around, Dime jumped with a loud gasp as the entry door swung open, revealing three robed figures. Dime screamed, and her limbs locked in place.

They stood like statues, backlit by the stairway window, with dark hoods pulled over their faces, which were obscured in the shadows beneath. They were hunched over, perhaps, or their cloaks rose with exaggerated padding. She didn't have time to understand, as one of the cloaked pyrsi pressed toward her with a span of glittering rope.

"You are under arrest," xe said in a strange, smooth accent, not to the two of them, but directly to Dime, as though they had located someone of great import. "You will come with us to further resolve this matter."

Who is this? A rest? Her thoughts confused, she stumbled in disorientation, coughing at a strong perfume. Why would someone enter her home? Why would they risk wearing hoods, against security statute? Who were—

The figure clasped her arm and started to pull her close. Then xe paused as if stunned, xyr eyes resting on Dime's pendant. She grunted, wrenching her hand away.

By instinct, Dime spun to the side, avoiding xyr next grasp. The figure tripped forward, losing xyr balance. A second figure pushed toward her, almost knocking over Ador's gift, sitting on the ledge. "Don't touch that," Dime snapped, whisking the small box into a jacket pouch without taking her eyes from the dark hood.

My children. An inner voice cut through her panic. Her children. Tum was at lessons and Luja was at apprenticeship. Tum had taken Agni to lessons; she remembered seeing the kita's furry paw curled over Tum's wrap when they'd placed Tum in the bucketpull to be lowered downstairs. That left Dayn, still behind her. They needed to get away. Whatever was happening, Dime only understood she could not let them tie her with any rope.

"Together," she called. As the figures closed in again, Dayn's familiar presence joined her as they grasped hands and bolted from the room like a construction rod. Their pursuers seemed confused by the action, but not for long. As Dime and Dayn tumbled out into the center staircase, Dime's training took over.

If you are detected, get away. Leave no evidence. Get away. Assess and plan later.

Their spike had one primary staircase, centered with a bucketpull. The first hub was three floors down—one of Dime's favorite spots, where Marn kept fresh brew and always ensured a current copy of the Caller. As they barreled toward it, almost flying downward with their hands on the spiral banister, Dime considered what they should do next.

The pyr in their room had put xyr hand on Dime without permission. She couldn't shake the touch of it. Was this what the—the Violence felt like? And the ropes. Why? No pyr would consider forcibly detaining another; those who violated the rules accepted being marked by warning hemsa tattoos and left to live out of the city.

Was it possible these pyrsi were from one of the outlaw villages on the edges of Sol's Reach? Had they abandoned all order? With hoods, she couldn't see their hemsa, if they had any. Wearing hoods would earn them more hemsa, if identified, so they must be serious. She had no clue what she was dealing with. Or why. Could they even mean. . . harm?

While Dime saw no other way out than through the hub—for as sure as Sol she wasn't going to submit to these cloaked strangers—she didn't want to put others in their path. Yet they trailed close behind her in the narrow staircase and, the image of their tightly grasped rope muddling her thoughts, she let her feet continue to run.

Dime landed hard in the center of her local hub, glad she was still wearing her boots as they slammed into the planked floor, surrounded by lounging residents and the smell of fresh brew beans. Several pyrsi screamed, scrambling out of her and Dayn's way. "Danger!" Dime shouted. "Danger; leave or hide!"

The hooded figures landed beside them without a stride to spare. One reached for her, getting hold of both arms this time. Involuntarily, Dime yelped. Dayn thrust the wheeled brew stand, brew and all, between them, forcing the aggressor to jump back and release her, as pyrsi in the hub gasped and screamed.

Dime jumped onto the counter, kicking the papers as she slid across it. Pages from the Caller fluttered into the air and Dime leapt over the side, aiming toward one of the two closest exits, knowing they wouldn't see which one she had chosen until she was through it. She raced forward with all her force, again propelling herself, hand over hand, down each floor's banister.

Purchasing a high home for a nice view now seemed like another of her more short-sighted decisions. Her heart pounding, she tried to remember where each hub was, as now she was in a less familiar section of the tower. The shouts from behind indicated a close pursuit, as did Dayn's voice, carrying over the din. "Go! Go!" he continued to shout.

She realized in that moment what Dayn must already have realized. They wanted her. Not Dayn. Dime. She was the one that needed to get away.

Unsure how she was able to keep pushing forward, and not feeling much of anything at this point, she continued the pattern: down the tower, find a hub, pick a new, less expected path. Stay one step ahead. Switching spires cost her time, but she hoped it might throw off her pursuers. She only needed to get far enough ahead that they would choose the wrong arch; maybe even enter a new tower once they got to the lower levels.

If she lost them, would they leave?

But she didn't lose them, and she heard a torrent of steps close behind. What do you want with me? Dime asked again and again. There must be better options than simply running, but there was no time to think. Floors flashed by, and pyrsi gaped and ran, and Dime gave up on reality until she had time to consider it again. Almost rolling out into the tower's street-floor lobby, she bolted for the entrance.

As though her senses caught up to her, she felt an overwhelming exhaustion all at once. Should she try and find Enforcement? Would these outlaws even respond? Wearing hoods and wielding ropes, they showed complete disregard for the law.

Yet she couldn't keep running this way, with her pursuers right behind her. She could run to a public place, but if the invaders tried to take her anyway, would pyrsi stop them? How could they be stopped if they did not respond to the law? The answers were not ones she would consider.

She thought that in a crowd, she could lose them. They seemed to want her specifically; she hoped they wouldn't use the ropes on anyone else.

Stumbling from the lobby arches as those within fled in panic, she heard the commotion growing behind her. There was a dome just down the street; with a sharp breath, she turned toward it. Pedestrians and toothcars paced by on the busy road. She hoped in desperation that they would block her from view and the pursuers would leave, their mission a failure. Behind her, the calls grew closer. They were gaining ground, almost to her.

She heard a bellowing yell. Turning by instinct, she saw that Dayn had leapt onto the tail end of the closest one's cloak and dug a set of metal claws—Construction Circle pyrsi always carried little tools—into the thick fabric to hook the figure's garments and hold him back so Dime had a better chance of leaving. No! It was too close to the Violence. The fabric must have been damaged. She would not allow it.

The figure wrestled away, not understanding that Dayn's tool had burrowed into the cloak, holding it back as xe continued to press forward. As the dark fabric rippled away, two large, iridescent wings sprung back and a rope of braided hair unraveled between them, as if xe hadn't shaved, well, for cycles.

For a long stride that was probably just a split moment, they froze, staring at each other. The pyr—she supposed xe was still a pyr; xe didn't look so different overall—wore a dark robe, accented with a small pin. Xyr face, what was visible outside of the hair, was much like anyone else's, but without any tattoos.

"Take that one too!" one of the cloaked figures yelled to the uncloaked pyr as xe pointed at Dayn, still in his slippers. "Meet back at Chambers!" Around them, chaos bounced through the crowd like lightning.

"Fairies!" pyrsi shouted, those whose shouts were discernable over the torrent of screams.

"The Violence! The fairies have returned it!"

Dime and Dayn locked eyes. "Don't worry about me," they both called, as if in chorus. Dime wanted to smile, but then it seemed she had two pursuers now to flee, whereas Dayn would just have the one. She'd better get to it.