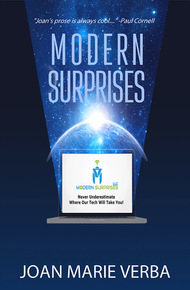 Joan Marie Verba earned a bachelor of physics degree from the University of Minnesota and attended the graduate school of astronomy at Indiana University, where she was an associate instructor of astronomy for one year. She has worked as a computer programmer, editor, publisher, social media manager, and web developer. An experienced writer, she is the author of the nonfiction books Voyager: Exploring the Outer Planets and Boldly Writing, as well as the novels Countdown to Action, Action Alert, Deadly Danger, Situation: Critical, Extreme Hazard, and Danger Zone, plus numerous articles and short stories. Her fantasy novel, Sword of Queens, was a finalist in the EPIC and Midwest Book Awards. Her children's chapter book, Wondry Dragon Finds a Home, received a first place EPIC Award. She is a member of the Science Fiction and Fantasy Writers of America, the Society of Children's Book Writers and Illustrators, and the International Association of Media Tie-in Writers.

How does a new technology come into being? Modern Surprises explores the fact that technology needs to be tested, that there are unexpected effects, and that technology doesn't always work in the way the original design indicated it might (and that can be delightful). When the characters find that Arachne responds to music, it adds yet another dimension to the technology. Then, once you have this exciting breakthrough technology, what do you do with it? Do you keep it secret, or do you make it public? And if it has a potential to be misused by those with selfish intentions, how do you keep it safe? Even more, how does technology affect your daily activities, and your interactions with others? How does it factor in with one's ethical decisions and obligations?

Modern Surprises LLC was no ordinary company: the science division had secretly developed a portal that would take them anywhere. The plan was to use the portal to help those in need. However, a billionaire industrialist found out about the portal, and schemed to lie, cheat, and steal to get it. But the Modern Surprises team was not about to let him have it.

Joan Marie Verba's Modern Surprises is science fantasy, glittering with technology and magic in equal parts. It features light hearted fun while providing a cast of strong female characters working in STEM — and doing so as a team, rather than as adversaries or rivals. Cooperation and adventure can go hand in hand, it turns out. – Cat Rambo

A man emerged from the car nearest the front door. He wore dark sunglasses and a black coat over his black suit despite the heat. Three other men, wearing suits but no coats, got out of the same SUV and followed him.

They entered the outer door.

Madeline flipped on the wall intercom and spoke into it. "We don't allow visitors to carry guns in the building."

The lead man spread his hands. Jay got a better look at the suit under his coat: an expensive, tailored outfit that made the suits Jay got at the big box store appear shabby in comparison. He guessed that the man's coat and polished shoes were equally expensive.

"We have no guns," the man said innocently.

"Whatever you call them, they're weapons and you are not allowed to bring them in here," Madeline repeated.

The man brought out what looked to Jay to be a Glock and handed it to one of his escort. The three men left, removed items from their coats, and put them in the SUV before returning.

The lead man smiled. "We're here to do business."

"What sort of business?" Madeline asked.

"I wish to purchase the license and plans to Arachne," he said amiably.

"I have no information to give you on that. If that's what you came for, you may leave."

"We have no business to conduct. Good day."

"Perhaps if we had a meeting over lunch. Or coffee. Talked it over." He pulled at the inner door and found it stuck. Turning back to Madeline, he added, "Surely you aren't afraid of me."

"Because we have nothing to say to each other."

"I can be very persuasive...and persistent. I'm a man who gets what I want."

"You're not getting anything from here. Good day."

Madeline turned to Jay. "Keep the shield up around you, but open the door," she said in a low voice.

"Are you sure?" he whispered.

She nodded. Jay released the door and heard a snick.

The man opened it and walked in. His associates gathered behind him. "I knew you would be reasonable."

Now that the man's voice was unfiltered, Jay found it pleasant, almost musical, despite the dangerous undertone.

"I opened the door only to make it clear to you that I'm not the least afraid of you and that you're getting nothing."

The man looked around pointedly. "You have quite a fortress here. Undoubtedly all of you feel quite safe. But what about your loved ones?"

"Mine are all active duty officers at Fort Liberty," Yolanda said. "Good luck getting past the missiles."

"I've spent thousands of dollars on private detectives trying to locate my relatives," Terry said. "If you find them, let me know."

L. M. took the toothpick out of her mouth. "Every one of my family, except my sister, live in at the family's estate in Utah. The buildings are largely underground and rock-solid. Two of them are designated as emergency shelters for the county."

"One of the family businesses is building demolition; another is fireworks. They blow up things for a living. So...I'll give you the GPS coordinates if you give me two days' notice." She put the toothpick back into her mouth and bit into it. "I'll sell tickets."

"My sister is doing classified government work," L. M. said. "If you so much as appear on the horizon, you'll be getting a visit from the Navy SEALs."

He turned to Jay. "What about you?"

"Don't look at me," Jay said. "My family disowned me years ago."

He scrutinized Jay through the transparent partition. "I can see why, sitting like a sniveling coward behind a shield."

Jay laughed. "Quite the opposite. When I get really angry, or those who have my back are threatened, I'm a one-man wrecking crew. So you could say that I'm here for your protection."

"Pretty tough talk for someone behind a barrier. Why not come out and face me like a man?"

Jay grinned. "So says the one who has nothing to stand on. I've got the high ground and I intend to keep it."

The man turned to Madeline.

"Mine have Secret Service protection. You've got no leverage with me."

Throughout this conversation, Jay had an eye on the monitor. The same vehicle he saw on his first day had appeared around a bluff and rumbled toward the parking lot. This time, zooming in on it, he noticed that Stacy was written on its side.

The man looked around the room. "You're all bluffing."

Yolanda walked over to the wall controls and changed the overhead monitor from the news channel to an internet connection. After typing in an address, she pointed. "That's my Mom and Dad, pictured right on the Army's website. My brother and sister are on other pages."

Terry followed suit, bringing up an internet news release. The headline read, Still No Clues to Missing Family after Seven Years, Legal Deaths Declared. She pointed and said, "Those are my relatives."

Madeline also brought up a news item: President's Daughter Weds. She turned to the man. "See the groom? That's my brother."

L. M. accessed a website titled, "Tour the Yeager Family Underground Mansion." Below it were the tour days (Saturday and Sunday) and hours ("fireworks at dusk"), the ticket prices, plus announcements of concerts and ice cream socials ("freshly made from our free-range cows"). Jay also noticed a photo of a member of the Yeager family shaking hands with Utah's governor; the caption said the governor was congratulating them on their LEED certification.

Vivian's password was automatically masked, but her bank records account showed transfers to numerous parties. She jerked a thumb at the screen. "Rid me of those freeloaders and the next transfer is yours."

Within the booth, Jay synced his smartphone to the monitor. He bought up a video showing a stack of jack o'lanterns. Suddenly, the picture showed him with a bat smashing the pumpkins, and then for good measure, the potted plants next to them. He finished by kicking over the flower pot stands. "I didn't like the way they were smirking at me," he explained.

Jay's attention was drawn to the outside monitor. Stacy bore down on the SUV in the middle of the parking lot. The SUV doors all opened with a bang. Five men scrambled out and ran. Athena drove the two-story vehicle right over it. Jay heard loud crunching noises.

The man and his associates turned toward the cacophony. Madeline leaned toward Yolanda and whispered something. She nodded and walked off.

Those from the SUV pointed their guns at Stacy and fired. The bullets ricocheted off Stacy's side and pinged on the building's glass.

"Tell those men to stop!" the man told his associates. They ducked outside and shouted. The firing ceased. Athena drove Stacy away, leaving behind a flattened vehicle.

The man turned back to Madeline. She took a slip of paper from Yolanda and handed it to him. "The amount reflects the purchase price of a new Lancelot A-series SUV."

Jay held back a smile. Athena had undoubtedly gotten satisfaction from flattening a piece of junk that had been advertised as "the toughest car on the road."

The man glared at Madeline, took the check, casually shredded it, and tossed the pieces over his shoulder.

"Forever," Madeline called after him.