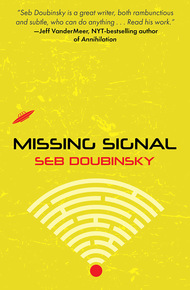 Seb Doubinsky is a bilingual writer born in Paris in 1963. His novels, all set in a dystopian universe revolving around competing city-states, have been published in the UK and in the USA, and translated into numerous languages. He currently lives with his family in Aarhus, Denmark, where he teaches at the university.

From Seb Doubinsky, author ofThe Song of Synth,The Babylonian Trilogy,White City,Absinth,Omega Gray, andSuan Ming, comes his highly anticipated next installment in the City-States Cycle.Missing Signal—a riddle wrapped in a mystery inside a government conspiracy? Agent Terrence Kovacs has worked for the New Petersburg Counter-Intel Department propagating fake UFO stories for so long that even he has a hard time separating fact from fiction. Especially when he's approached by a beautiful woman named Vita, who claims she's been sent from another planet to liberate Earth.

Seb Doubiensky's book is set in a dystopian future, but even there, hope lurks behind the words. When the protagonist Terrence Kovacs has become mired hopelessly in falsity as part of his work for the New Petersburg Counter-Intel Department, how can he know whether or not the hope of liberation being extended to him is true — or just another lie? Sometimes hope involves trust and a willingness to leap without looking. – Cat Rambo

"A man claiming to be an ex-member of the ultra-secret Alien Containment Force, known as ACF or Force 136, has agreed to meet us in a secret place and tell us what is really going on behind the official UFO scene. Here is what he told us and it is terrifying."

Terrence's eyes moved away from the PC screen as he reached out for a cigarette. The man talking had a bad '70s haircut and a drooping mustache. The other man sitting in front of him, half-hidden in the shadow, wore a pair of jeans and a loose red polo shirt. He had no watch. There were two cameras, alternating on the faces—one pimply, nervous and awed, the other dark, invisible and mysterious.

They even had the voice modified, for security reasons, but Terrence knew what it sounded like. He also knew that "the man claiming to be" wore a wig, colored contact lenses and a set of false teeth masking the real ones. The missing watch was an important detail: it made identification more difficult. A watch is a signature object. Like shoes. The man had also bought a type of shoes he usually never wore.

Terrence smiled, listening to the mysterious man speak, and looked down at some papers spread before him. He chewed on the tip of a pencil that served as a poor substitute for a cigarette and nodded to himself. All the necessary information—or rather disinformation—had been passed. Another worldwide alien conspiracy theory confirmed. The New Petersburg Counter-Intel Department had done an amazing piece of work.

Terrence patted himself on the back. Good job, officer. It had been a tough mission: he had really sweated like a pig underneath that horrible wig, and the new shoes had maimed his toes.

The Counter-Intel Department cafeteria was known to be one of the best in the New Petersburg Armed Forces, so Terrence chose the strange-looking pastry without any fear and put it on his tray, next to the Styrofoam coffee cup. Whatever it was, it would taste good—or at least, better than in all the other armed forces cafeterias.

He added milk to his coffee and went to sit at a free table in the large and almost empty space. He felt like a cigarette, but there was a complete smoking ban, even in the immediate vicinity of the building. He took out a nicotine gum and stuck it in his mouth. The foul spearmint taste ruined both his craving and the taste of his coffee.

The elevator was empty and he smiled at his reflection in the mirror. He sometimes wondered why they put mirrors in elevators. Were there hidden cameras behind, filming them? There were cameras everywhere, after all—why not here? The idea made him smile. It looked crooked in the mirror.

Was his life a series of paragraphs or a long seamless succession of events? Was his "I" a heavy solid object in the center or a split-up entity, shining differently in 10,000 worlds? Was he passing through endless mirrors or was he stuck on a single reality plane? Was he an endless illusion or a limited materiality? Was he? Simply that: was he?

Terrence sat down at his desk, putting his coffee next to the computer keyboard. He looked at the screen and his mind drifted to chapter four. If Terrence ever had to choose a chapter number for his life right now, it would have been four. Not quite the beginning. Not even the beginning of the beginning: the possibility of something happening in the next chapters, long before the end. But he was 39 now, and he felt he was way beyond chapter four. Probably more like eleven or twelve. So four was wishful thinking. And it might become nostalgia soon. Sighing, he returned to his notes. Sometimes he let his mind drift too much.