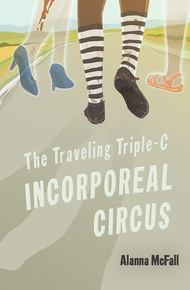 Alanna McFall is a novelist, short-story writer, and playwright. Originally from Minnesota, she lived in a number of places on either coast before landing in the Bay Area, where she is a resident playwright with PlayGround San Francisco. When not writing, she is a theater administrator, cross-stitcher, and podcast nerd. Follow her work and upcoming projects atalannamcfall.com.

Chelsea is determined to make it to her brother's wedding. And she's not going to let the fact that she's been dead for two years stop her.

Joining with her mime friend from a New York City park and her ghostly mentor with forty years of afterlife under her belt, the three women set out on foot for San Francisco. Along the way, they are faced with joy, sorrow, and the haunting surprises of the open road. This humorous and lightly macabre journey explores relationships, personal burdens, and what it means to keep moving, even when your heartbeat has stopped.

Alanna McFall - The Traveling Triple-C Incorporeal Circus is another favorite of mine, a re-imagining of Peter Beagle's A Fine and Private Place that takes it on the road, while making it a story of female friendship, and the hope that springs up from it. – Cat Rambo

I love the gold trim. I'm so glad they went with gold trim instead of that floral stuff. Or that lacy thing Mom was pushing for."

Careful not to slip on the icy sidewalk and fumbling with her phone, Chelsea Shu turned over the card in her other hand. It was heavy stock paper, with elaborate raised type and a metallic sheen on the border that her sister Phoebe was so enamored with. "I didn't think Osric was ever going to let her get away with that. But they really do look perfect." It was the most formal and refined thing she had ever seen her brother produce. She had to assume that it was entirely his fiancée Tamika's doing. "Is it sad that I want to put it on my fridge like it's a drawing from third grade?"

Phoebe snorted. "Do it. And take a picture and send it to him. We need to give him so much shit over how long this took."

"Are you planning on making the entire wedding process a nightmare for them?"

"Only until I get bored or Tamika asks me to stop. We're doing our pestering long distance, so we have to make up for it in quantity."

Chelsea shook her head as she approached the subway station, dodging a few patches of ice as she went. She couldn't wait to get down into the tunnel and strip off her jacket; she'd be sweating into her blouse within minutes. She was convinced there was no way to get through the subways in winter looking good, not in New York. Even if her coworkers kept proving her wrong. "Okay. Well I can help you on Operation Annoying Sisters later. I need to head to work now."

"Fine, fine, though we need something good for Christmas. I'm thinking banners and confetti."

"Whatever, dork. Later." She ended the call and scurried down into the shelter of the tunnel entrance, just as a blast of wind threatened to yank the invitation out of her hands. July in San Francisco was certainly sounding a lot better than December in New York, and she needed to hold onto the reminder.

People packed into Union Square in a seething mass, everyone trying to make their connections as quickly as possible, trailing ice and water on the tiled floors and brushing past the pillars in big whooshing coats. Her high heels clicked and scratched over the salt as she weaved her way towards the Q train, and she had to hope that her boots were still in the office where she had forgotten them on Friday night, before the major snow had hit. There was no way she wanted to get home in these heels.

On the platform, Chelsea pulled the card back out of her pocket as she walked along, dodging past commuters and a homeless woman huddled on a bench. Her heel snagged on an edge of the woman's blanket, but she shook it free and kept walking without taking her eyes off of the paper.

You are cordially invited to the joining of
Tamika Jeffers and Osric Shu
in matrimony.
The ceremony will be held on July 31st in San Francisco City Hall.

Further details and instructions were written in smaller type at the bottom, the usual matters of times and what dinner you wanted and how many people you were going to bring with you. Chelsea would have to call over lunch and see if Heather had gotten her own invitation or not; she had been friends with Osric before she and Chelsea started dating, over five years ago now. She probably had her own invitation, all things considered, and it wasn't like there was much risk of Chelsea bringing someone else as her plus-one. Maybe another friend who wanted to score a trip to California.

She knew that Phoebe had her big plans to tease Osric, but Chelsea was honestly more proud than anything. Her goofy little brother was growing up. With an equally goofy woman, yes, but one who brought out the best in him. And he brought out the best in her. Chelsea had never seen her brother so— It was not that he was the happiest he had ever been when he was with Tamika. It was that he seemed the most together, the most whole.

Like everything fell into place when she was by his side. And to declare that to the world, in a big ceremony, for the whole family to see? Chelsea couldn't be happier for him if she tried. She skipped her way around a pack of tourists, barely glancing up from the flowing typeface. She could hear the rumbling of the Q coming down the express track, going slowly to take heed of the over-packed platform.

She had to get them a good present. Not just something utilitarian or bland. She could ask Heather for ideas later, or they could do a big gift from the two of them. Tamika would be more thrilled to get a new set of wireless controllers for their consoles than a set of good china. Chelsea could subtly ask them what their favorite games were when they visited for Christmas. Or just ask Osric directly, and count on him forgetting she had said anything by the time the wedding rolled around. The train lights illuminated the tinsel on a particularly exuberant Santa's hat next to her.

Chelsea was halfway to planning nerdy baby-themed gifts to wind Osric up, when she stepped onto the yellow warning strip in order to avoid a group of carolers trudging down the middle of the platform (at rush hour, for god's sake). She was too busy trying to avoid getting hit in the face with sheet music to notice the patch of ice on the textured pavement. And Chelsea Shu had never really been good in her high heels. The train lumbered into the station.

They always seemed slow when she was waiting for them, but it was suddenly clear that the trains moved pretty fast from this perspective, when the lights were shining directly in her face. Her legs were kicked out towards the platform, as if she could find purchase mid-fall if she just reached hard enough. Her arms swung out for balance, and she was still holding the card in her right hand. Her last thought was that she did not want to drop it into the muddy water pooled on the bottom of the tracks.

She could perhaps be forgiven for having her priorities out of order. It was her little brother's wedding, after all.

And then she was gone.