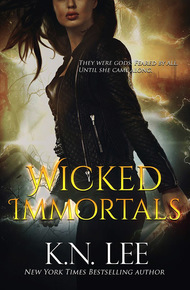 K.N. Lee is a New York Times and USA Today bestselling author. She is the author of the Dragon-Born Saga, Eura Chronicles, Wonderland University, and the Chronicles of Koa series. When she is not writing twisted urban fantasy, epic tales of dragons, pirates, and mermaids, and dark poetry, she does a great deal of traveling and spending time with her family and running Pixie Girl Apothecary. Psychic, world traveler, and energy healer K.N. Lee loves to bring magic to her books and her real life. She is a winner of the Elevate Lifestyle Top 30 Under 30 "Future Leaders of Charlotte" award for her success as a writer, business owner, and for community service.

She is signed with Dragon Roots Emporium and represented by Hershman Rights Management.

K.N. Lee loves hearing from fans and readers. Connect with her!

In a world where vampires, shifters, and supernatural creatures coexist with humanity, the Immortals and angels are all that keep order. But, when a vengeful god returns to claim his world and kingdom of vampires, ancient goddess Inanna must reveal her true identity and leave behind her masquerade as a human. Things take an unexpected turn when her ex-boyfriend Hades returns with shocking news, and her current boyfriend sheds light of secrets of his own.

It's not often you find a vampire story that involves the pantheon of Greek Gods and this one is a delight. KN has a way of sucking you (pun intended!) in and making you afraid to blink because you don't want to miss anything. You won't be able to put Wicked Immortals down. – Michelle Fox

Hades drank from a golden goblet, his eyes closed as the screams rippled through the stagnant air.

It was a glorious melody, one he knew all too well. He'd been born into a world that hated him.

Death was his occupation and the Underworld was his home.

He could thank his brother for that.

He grimaced and opened his onyx eyes to gaze upon the sea of bodies writhing on the floor of the Pits of Despair. It was nothing more than a harem of souls desperate for attention. He sneered at the sight of them.

No amount of beautiful women could quench his thirst, and yet they came in hordes to pledge their loyalty and allegiance to him. No one even batted an eyelash when it was revealed that one fresh soul would be sacrificed each full moon to his hell hound.

Enchanting them had been easy, and they proved loyal until death.

Margot stepped beside him, her arms crossed over her full bosom. She tilted her head, and dark hair cascaded in lush amber waves over her slender shoulders.

She was a vampire—immune to the effects of crossing over from the human to spirit realm. As his assistant, he'd brought her along to survey the new souls that had arrived. They were waiting for one particular kind—the kind that were special.

"You do know that Zeus will punish you for this," she said, and yawned.

He drank the last of the wine and tossed the goblet down the stairs that went nearly one-hundred feet into the earth. It clanked against the stone until it met the grasping hands of the fresh souls.

"Do you think I'd be daft enough to get caught?" Hades asked. A mischievous smile came to his lips. "I've summoned the Fates to handle this one."

Margot's brows rose. "For her?" she asked. "You've put yourself in danger…for her?"

Hades didn't reply. But, Margot knew the answer. They both did.

He grabbed his cloak and transformed it into a suit jacket with a blink of an eye. He slipped it on, and left the Pits of Despair. The shadowy veil was sealed behind him as he stalked up the ancient stairs of his castle to step into the night.

"Yes," he said, pulling in a long breath of fresh air as he leaped into the night sky and transformed from a man, to a black dragon with the wingspan the blotted out the moon and scales that glittered in its light.

Margot didn't follow, which was just as well. He needed to be alone.

Inanna would be his…even if he had to slay millions of humans, angels, and vampires to get her attention.