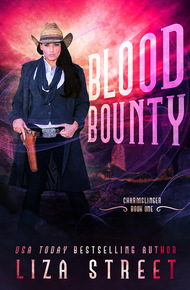 Liza Street got her start in romance by sneak-reading her grandma's paperbacks. Now she's a USA Today bestselling author. Whether writing paranormal romance or urban fantasy, she delights in throwing humans and supernaturals together and watching the sparks—and claws—fly.

Gracie Boswell's got a charmed bullet, a brand new posse, and a pack of outlaw vampires to kill.

The tiny town of Penance has a big vampire problem—and charmslinger Gracie Boswell aims to be the solution. A whole nest of vampires makes for a mighty fine bounty, though, and Gracie is far from the only charmslinger angling for the job. When a charming local layabout and an old competitor elbow their way into Gracie's posse, she's forced to at least pretend to play nice...but trust is scarce in the west, and smart bounty hunters always sleep with one eye open.  But Gracie doesn't have much time to watch her fellow bounty hunters—Penance's vampire nest is bigger and more organized than anyone suspected, and there's at least one traitor in the town's midst. Soon, Gracie finds herself in the unenviable position of leaning on her posse...and at least one of them isn't what he claims to be.

Liza told me Gracie had been rattling around in her brain for a while, and the Beyond Twilight bundle gave her the nudge she needed to finally get the story down. Gracie came to life in the span of a month, and I was lucky enough to beta read one of the early drafts. I literally told my entire family about this book even though none of them cares about vampires. I was like, "Listen, this was amazing. Whhhhy don't you love vampires toooo?" Even better, this phenomenal read is exclusive to Story Bundle. Gracie is full of homespun, plucky charm and the story takes vampires well beyond Twilight and into the wild, wild west. – Michelle Fox

I could lie to the sheriff and tell her I have a posse on the way, but I've found it best not to tell tall tales to the folks I want to pay me at the end of the day. She might never find out, or she might have a charm or two on her person. Charmslingers like me aren't as uncommon as "proper" folk would like to think. Humans all over the west have been figuring out that life is just a tad easier sometimes with a little magic to help them along. They just don't like to admit as much because they think it taints them somehow. They'd rather shout slurs at the ones who use it openly. Jealous, I suppose.

That leaves me with one other option—finding a posse in name only. They stay behind, out of my way, and I pay them a set amount upon my return. Best way, really; there's no risk of betrayal. But the right person has to be a combination of greedy—wanting to take my money, vain—not wanting to mess his pretty face, and without valor—not minding that he looks like a coward for staying behind.

A man walks into the bar and takes off his hat to reveal sandy blond hair. He looks directly at me. His bright blue eyes seem to shine through the gloom, his nose is straight, his teeth all intact as he smiles.