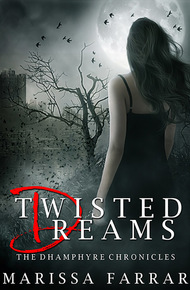 Marissa is a powerhouse who writes riveting can't-look-away stories. Her vampire has just started college and keeps getting flashes of the future while fighting to control her bloodlust. This is a vampire who strives to be more than her nature, who won't let the monsters win. Come explore vampires who want more in Twisted Dreams. – Michelle Fox