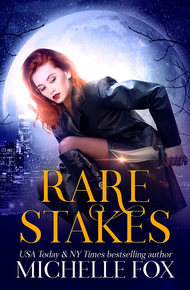 FBI agent Amelia Larson solves impossible cases with her psychic abilities. Shealwaysgets the bad guy—until she's assigned a Dracula copycat case that bites back. The killer drags her into a mysterious underworld where, not every serial killer is human, not every case can be solved, and not everyone can survive.

A psychic FBI agent, the vampire hunting her, and the killer that stalks them both.

Okay, it's weird to hype my own books. Here's what I'll tell you: both books have never been bundled together before making this a BOGO deal for this Story Bundle, and readers have compared the stories to Ilona Andrews' Kate Daniels series. My heroine, Mel goes way beyond Twilight because she's too smart to be impressed by a fancy pair of fangs. The mysteries in each book are intricate and not easily solved even though Mel is psychic...and has an extra, secret super power. – Michelle Fox

The most innocent things could hold more darkness than I ever wanted to see.

What could be so terrible about takeout? Normally, it was awesome. I lived on the stuff. I read the menus like the bible. But this wasn't that kind of takeout.

I stared at the Styrofoam containers on the table. My stomach was already cringing, looking for a place to hide. The containers gleamed virgin white under the fluorescent lights of the FBI conference room, but their contents were not quite so pure.

Each carton had a handwritten label on top. One read, Marion—bright and charming. Another read Stacey—good body. The last, Eileen—agreeable.

The writing was large with strong vertical strokes and half-closed loops. I wondered what a handwriting analyst would make of it.

Was there a particular flourish that indicated someone was a cannibal?

I wished I was a handwriting analyst. They never saw the blood. I liked the idea of a gig more pleasant than opening these containers and touching their contents with my bare hands.

Marion, Stacey, and Eileen had picked the wrong boyfriend. A boyfriend who believed if he collected the flesh of women with the qualities he wanted and then fed it to other women, it would magically create the 'perfect' girlfriend.

Say it with me now...Ewwww.

Talk about crazy in love.

A tap on the window behind me broke my train of thought. I looked over my shoulder to see no less than the entire forensic lab watching me through the conference room window.

Frankie, one of the lab techs, pointed at his watch. A compact Italian-American, Frankie talked like the Godfather and thought he was irresistible to boot. He was also remarkably unperturbed at my refusal to date, flirt, or otherwise acknowledge his romantic magnetism. The guy was five inches shorter than me. Seven when I wore heels.

I had serious qualms about dating someone whose head would make a nifty armrest.

Besides, I had a boyfriend…or whatever you call a commitment-phobe who blows hot-and-cold. On the up side, Brendan wasn't needy when I had to travel for work.

Another tap on the window brought me back to the task at hand. I blinked and focused on Frankie, who gestured wildly at his watch. The message was clear: Get on with it. I wondered how much money he stood to lose.

When news spread about what I was going to do, a betting pool had sprung up. The bets ranged from how long it would take me to do my job to whether or not I would throw up.

I never threw up. I wasn't that kind of girl. My stomach did everything but hurl. Anyone betting on puke was going to lose money.

Even so, the thought of touching human flesh made me more nauseated than I wanted to admit. I steeled myself with deep breaths. I'd seen dead bodies before, but this would be my first time touching one. Well, technically, it wasn't a body, just chunks of meat someone had chopped up. The actual bodies were missing, and it had become my responsibility to figure out where they were.

It would have been easier to ask the guy who'd made these women into gourmet meals, but his dietary habits had left big holes in his brain. He'd contracted Kuru, the cannibal's form of Mad Cow disease, and was slipping into dementia and certain death. So 'psychic to the rescue' it was.

I sighed and pulled one of the containers toward me. It was Marion. I turned my head in an effort to get my nose as far away from the containers as possible. Looking out of the corner of my eye, I held my breath and peeled off the lid.

When no gross smell assaulted my nostrils, I worked up the courage to look inside and was pleasantly surprised to see the meat was frozen. In fact, it was kind of anti-climatic. It didn't smell. It wasn't squishy, and it had been neatly cubed like steak ready for a stir fry.

I managed to convince myself it was just that, up until I actually touched it with my bare pinkie. In a flash, I was with Marion, standing in the kitchen chopping carrots as soft jazz played in the background. Her attention on the task at hand, she never saw him coming and didn't realize anything was wrong until the knife bit into her body.

Marion turned, her hands raised, and received the first of what would be many defensive wounds on her forearms. "What are you doing?" Her voice held incredulous, heartbreaking horror.

The perp slammed a fist in her mouth, instantly shutting her up. Then he stabbed her over and over, slicing through the fabric of her clothes and her skin as if it were soft butter. Several minutes into his assault, her soul began to slip away.

Like many victims, she wasn't prepared for the violence of the attack. Marion couldn't match up reality with what she had believed—that she was in a loving relationship with a good man. She never knew the monster who killed her had existed.

Her soul fled her body and took me with it. We floated up by the ceiling, which gave me a panoramic view of the crime scene. I watched with detached interest, as the man Marion thought she would marry, neatly hacked through joints, severed the head, and separated the rib cage from the torso with a sharp crack.

The perp brought the flesh to his mouth and sucked some of the raw meat off the bones with loud smacking sounds. The curve of a rib left red smears on his cheeks giving him the appearance of a psychotic clown.

I floated with Marion, sinking into blissful apathy with her, because that was better than feeling this horror show. She didn't grieve—the dead don't feel loss like the living—she just drifted in a dreamlike fugue state. Finally, with a mental sigh, she realized her body wouldn't hold her anymore.

When she moved toward the light to make her final journey, I pulled away and forced myself back into the body. I wasn't interested in finding heaven. Where did he hide the body?

The answer came to me, and I broke contact. "He buried them all in his elementary school's playground, under the slide. All three of them are there." I spoke in a calm, measured voice that stripped away the horror, leaving it trapped inside.

"But you didn't even look at the other two," someone in the back protested. They probably made their bet on time.

I shrugged. "I didn't need to. This was the last one he buried. I saw the other two in the ground when he dug the hole." I didn't mention he liked to take out their bones and run his tongue over every groove. Some things were best left unsaid. No need for all of us to have nightmares. I was used to them at least.

I stood up and made my way out of the conference room, using my elbows to push the door open. I wanted to wash my hands. Now.

Scrubbing down at the forensic lab sink, I silently vowed to not touch any food with my pinkie for at least a month. I soaked my hands for a good ten minutes after the first wash and then soaped up again.

My job would be so much easier if I didn't have to touch things in order to read them. This one was off the cootie meter for me, even more so than the gross-out level. I couldn't shake the mental image of the murderer in his cell, his brain slowly melting because he ate what I had touched.

Ah, the glamorous life of an FBI agent. If only people knew what they didn't add to the scripts on TV shows. They never showed the stuff that got into your head and stuck there like soul-sucking grime.

The job wasn't all chasing the bad guys and participating in gun fights. Some days it was more like Fear Factor mixed with a horror movie. How much could you take before you snapped?