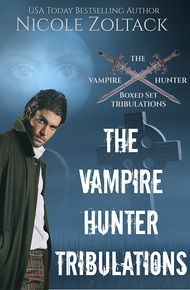 When she's not writing about knights, superheroes, or witches, she enjoys spending time with her loving husband, three energetic young boys, and two precious little girls. She enjoys riding horses (pretending they're unicorns, of course!) and going to the PA Renaissance Faire dressed in garb. She'll also read anything she can get her hands on. Her current favorite TV shows are The Witcher and Stranger Things.

Visit www.NicoleZoltack.com to learn when her next book is released as well as excerpts, cover reveals, and giveaways!

Meet Blake Damon. Vampire hunter. World traveler. Enjoy all of his tribulations and trials as he tries to save the world by staking one vampire at a time.

Nicole offers dark tales that also hold hope and redemption. Blake must overcome his own darkness to take on the vampires of the world. The series of tribulations and trials cover the aftermath of a life taken by vampires, of a son fighting to find closure and struggling to fill the emptiness left behind when the monsters take so much, you have nothing left to give. Here be vampires. Bring extra stakes. – Michelle Fox

Before I can blink, before I can think, before I can take a breath, I race inside the burning building. Smoke assaults me, but it's the intense heat that forces me back a step. My lungs feel tight, and I already feel like I can't breathe. My breathing is shallow as if I can't take a deep breath.

My eyes water, and I can't see clearly. The roar of the fire, the creaking of the house, the shouts of the firefighters all fade away. A faint ringing replaces the chaos of noises.

I turn immediately to the left and enter a spacious room A family room maybe. Flames have kissed half of the furniture, and I can hardly walk. The fire is spreading.

A faint yelp pierces through the ringing. That ceiling beam has trapped the dog beneath a table. The tablecloth is up in flames too. The dog whines, too scared to move.

Now's my moment, my chance to be a hero.

I dart, dash, and jump my way across the small fires toward him. One of my feet gets on fire, and I stomp it out immediately. I'm so frightened that I stand still.

The dog whimpers, his fright greater than mine. Without me, he has no chance.

I have to save him.

Dimly, I'm aware of firefighters leaving the house. More blasts of water rock against the house. Another part of the ceiling falls.

I run around another fire and jump. Awkwardly, I land on top of the dog. The animal jumps onto my back, and I climb out from beneath the burning table.

More chunks of the second story fall, the burning piece too wide for me to cross the room. I dart to the dining room. Next is the kitchen. The smoke here is so thick that I can hardly see. My fingers fumble for the walls to steady myself, and I grip a railing.

Another set of stairs.

The dog barks and settles on my shoulders. A small dog. I'm not even sure of the breed.

We climb upstairs. At the top, I halt.

There are burning bodies piled in the room in front of me. The fire is licking and devouring its way up the people's legs. It's a terrifying, devastating sight.

I can't look away.

The flames creep up to their waists. Two men. A woman. Their faces reveal that they're dead already as if their paralyzed ignorance of the fire wasn't enough.

It's their necks though that make me even more frightened than that fire, than the sight of dead bodies.

The dog whines and jumps down, racing over to the people. His owners. His dead owners.

Although I don't want to near them, I do. I grab the dog despite the animal clawing me. The wounds sting as much as the fire, but I don't really cry out.

Or maybe I do because I hear my name.

Holding the dog in a death grip against my chest, I dash back out to the hallway. Dad's the only firefighter in sight.

But he's not the only one in the hallway.

Standing behind him is a dark, foggy form that gives way to a clear image of a devil.

He's tall with glowing red eyes, but it's his mouth that has me frightened most of all.

His lips, his teeth, his chin are all covered with blood.

But I'm too late.