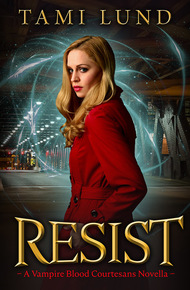 Tami Lund is an author, a wine drinker, an award winner, and a lover of romance. She writes happily ever afters, one book at a time. You should sign up for her newsletter for updates, sales, free reads, and a regular dose of her quirky sense of humor: http://www.subscribepage.com/Tami_Lund

Tami has won multiple first place awards, for both her paranormal and contemporary books, including a RONE Award and a Pages from the Heart Award. Several of her books have also hit the Amazon best seller list as part of short-term, charity anthologies, and Dragon His Heels, the first book in the Taming the Dragon series, is a Nook best seller.

Not all vampires are bad. Some are very, very good...

My name is Cam, and I run the Chicago vampire coven. I haven't fed in far too long because I've been busy tracking the latest threat to my city.

At the worst possible time, I meet a sassy, sexy human woman who hates vampires. I saved her from a couple of human thugs, but she doesn't see the irony in that scenario.

I'm determined to prove that vampires aren't all bad guys just because we drink blood and prefer moonlight to the sun, but before I can, the actual bad guys ambush and kidnap us both.

Now, the only way we're going to get out of this mess alive (as alive as some of us can ever be, at any rate), is if I feed from her.

Which is the one thing I swore I wouldn't do.

Bonus – two books in one!

Tami takes us on a wild ride with vampires from Chicago to Jamaica and back again in this two book duet exclusive to Story Bundle. I've known Tami for years and she writes great stories that have you racing through the pages to see what happens next. – Michelle Fox

What the fuck was going on? I hadn't recognized a single vampire who stormed into my house—not a goddamned one. There'd been too many for my lieutenants to subdue, and I'd become too lax in my security after a handful of quiet decades. My own damn fault.

And now I'd put Anya's life in danger as well. I had no idea who these men were, what they wanted from me, but it most certainly was not an offer of tea and crumpets. As many and as determined as they were, I worried that Anya would get caught in the crosshairs and be killed. When the blond asshole had shouted at me while carrying her down the stairs, if I'd had a beating heart, it would have stopped, at least until it registered that she was—for the moment—unharmed. She wasn't dead, but she was in their clutches.

After subduing me, they'd wrapped me in a silver chain—just what I needed, more of an energy drain when I barely had any as it was. I should have taken Anya up on her offer to feed from her. I still might not have won that fight, but at least I could have walked out of my own damn home without stumbling and falling to my knees enough times that two vamps finally stepped up and slipped their arms under my pits, dragging me to a waiting white panel van with no windows in the back. Apparently these guys weren't new to the business of kidnapping.

"What a wimp," somebody said. "That's not even a lot of silver. How the hell is this guy in charge of the entire damn city?"

So they knew who I was, but then again, several of them had said my name during the scuffle, so I'd already deduced as much. Given the rumors, this looked like some sort of coup. Someone had decided they wanted my territory.

It had happened before, and I could overcome this latest threat—except for Anya's involvement. I couldn't do a damn thing that might hurt her, or worse, cause her death, which annoyed me anew. Goddamn it, this was exactly why vampires tended to suppress emotions. When you cared, it made you vulnerable.

I was shoved into the back of the van, causing me to smack into the side head first before rolling onto the floor. While stars swam before my eyes, I heard someone say, "What should we do with her? Put her back there with him?"

"Are you a fucking moron? She's human. She's immune to silver, so she'll just take it off him. Put her in the car with us."

Damn it. I'd have sunk my fangs into her skin without remotely asking her permission. I'd have figured out a way to make it up to her later. Diamonds, furs, a mansion on the lake, a trip around the world in a sailboat, half a dozen orgasms in one night, whatever the hell she wanted in return, because her blood would have given me the strength to get us both out of this situation. And then I'd have taken her to one of my hideouts that wasn't even on the map, tucked her away, and returned to fucking destroy whoever the hell had the audacity to try to take over my territory. There was a reason Luther had deliberately chosen me to rule Chicago. He had known, even back then, that I'd never let it go.

I sat on the floor in the van while it lumbered through the streets of Chicago. I couldn't see as there were no windows back here, however, at the rate of speed we were traveling, there was obviously no traffic, foot or vehicle. The St. Patrick's Day revelers had all taken to their beds by now, to sleep off green beer and cabbage hangovers.

Wherever we were going, it couldn't be too far from my home base, because dawn would be breaking soon, and at the moment, I was the most protected of all the vampires in the vehicle with me. Those guys in the front would start sweating as soon as the first rays of the sun spiked through the windshield. Depending on their age, they might freaking explode on impact.

The brakes squeaked as we came to a slow stop, and then I felt a blast of cold air, indicating somebody had rolled down a window. A couple of people spoke in low tones, and then the window was rolled up and we continued forward, driving at an unhurried pace, like we were in a residential area. Or, I learned a few minutes later, the alley behind a huge brick building. While the two guys from the van crab- walked me toward the structure, I noticed a small, gold placard affixed to the wall next to the door.

"Macy's? You went through all this to take me shopping?"

"Shut the fuck up, smartass." The guy to my left gave me a shake and then hissed when his hand came into contact with the silver chain.

I wanted to ask after Anya, but I didn't dare show my hand, not yet, not when I had no idea what I was up against and was still confident they hadn't hurt her. They hadn't, had they?

"Get your hands off me, you asshole. Jesus, you're right, I'm not wearing a bra. Does that make you happy? What the hell do you want me to do now, jump on a trampoline?"

Nope, she definitely wasn't injured. I bit the inside of my cheek to keep from grinning at her obvious disdain for whomever she was talking to. I'd love to see her jumping on a trampoline, with or without a bra, but I'd never in a million years say as much.

Glancing over my shoulder, I saw the guy next to Anya double over; she'd either punched or kicked him. Served him right for assuming he could handle her. I had my doubts that even I could handle her, not that it would stop me from trying to find out.

After we figured out how to get out of this predicament, of course.

We entered the building through the loading dock, stepping into a warehouse with ten-foot ceilings and rows and rows of shelves stretching all the way to the rafters. Clothing, home furnishings, pots and pans and other kitchen paraphernalia, bathroom supplies—pretty much everything a savvy vampire might need without actually having to go out and purchase it. Pretty damn genius place to set up shop, actually.

We were led down a row of shelves piled with women's clothing, guided by the light of the security sensors. At the end, someone was holding open a door, and about ten of us piled into an elevator that dropped us a couple of levels beneath the building. Anya was in the car with me, but there were so many people crammed between us, I couldn't so much as make eye contact, let alone touch her. I did, however, take small comfort in the muttered "ouch" I heard every few seconds when someone inadvertently moved too close to my silver chains.

When the doors swept open, I saw a stark, empty hallway with bare light bulbs hanging every few feet from the exposed rafters. We all shoved our way out of the car and headed down the hallway, the sounds of various shoes slapping the concrete floor echoing up and down the corridor. Before we reached the end, the guys who were still half-carrying me came to a stop and turned to the left, one of them knocking on a nondescript door there.

Someone opened the door just enough to peek out at the crowd gathered in the hall, and then he swung it open, apparently an invitation for us to enter.

The room was massive, probably ten thousand square feet. It looked like the throne room from the Game of Thrones series, with cylindrical, white pillars creating a pathway leading to a dais and what appeared to be a throne, upon which a cocky, arrogant vampire sat.

I recognized the thick blond hair swept away from his face and pulled back into a ponytail at the nape of his neck. Glittering dark blue eyes. Patriarchal nose and a square jaw. His black button-down shirt hung open, revealing perfectly carved abs. Every woman's fucking fantasy, vampire and human alike.

"What the hell are you doing back in Chicago, Hollis?"