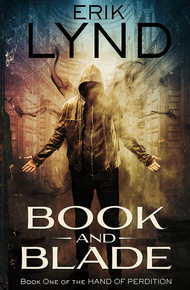 Erik Lynd writes novels and short stories primarily in the horror, dark fantasy, and urban fantasy genres. Currently he is in the middle of two ongoing urban fantasy series; Silas Robb and The Hand of Perdition series. He also writes the occasional horror novel such as Asylum and The Collection. He lives in the Pacific Northwest where yes, it does rain a lot and no, he does not mind it. You can learn more about his writing at www.eriklynd.com.

Erik Lynd writes novels and short stories primarily in the horror, dark fantasy, and urban fantasy genres. Currently he is in the middle of two ongoing urban fantasy series; Silas Robb and The Hand of Perdition series. He also writes the occasional horror novel such as Asylum and The Collection. He lives in the Pacific Northwest where yes, it does rain a lot and no, he does not mind it. You can learn more about his writing at www.eriklynd.com.

Book and Blade by Erik Lynd

A big mistake. A quest for revenge. Hell has a new bounty hunter.

Hell is the ultimate prison and only the most powerful, the most cunning can escape eternal damnation. One being is charged with dragging escaped souls back to the infernal realm.

He is called the Beast. And he has just died.

He never asked to inherit the office of the Beast or take up the mantle of the Hunter of Lost Souls. He never asked for his safe, comfortable world to be shattered and his family taken from him.

And to make matters worse, it was all a mistake.

Now Christopher must master the power of Hell inside of him if he hopes to survive this new reality. And if he can get a little revenge in the process, all the better.

The Beast struggled to hold his entrails in as he stumbled through the underbrush just outside Hapensbury College. The irony of his recent evisceration was not lost on him.

He was weak. Weaker than he had ever been before. Blood seeped from multiple wounds, wounds that if made by any mortal weapon would have healed instantly. These wounds, however, had not been made with any mortal weapon. How the dark soul had obtained a Relic was a mystery.

Laughter brought him out of his dark reverie. Through the brush he could see a group of students walking down a path on the edge of the campus. The Beast hated the sound of laughter, it grated on him. Laughter was a distinctly human trait, which was all the more reason to kill them when his work allowed. But now, in his weakened state he sank lower into the underbrush. Though he was growing weak, it would be nothing to kill this group of mortal children. But he knew his end here was eminent, and he had little time for sport.

Like a primal instinct, the idea and need to find a successor rose up in him. The need had taken hold of him as soon as the thought entered his mind. He had never thought of having to pass along the gifts, let alone bequeath it to a mortal. Since the First Light on the First Day he had always been the Hunter.

When the group of college students passed, he stepped out onto the walking path. He pulled his long coat tighter about him to hide most of the carnage that was left of his body.

He sniffed the air looking, hunting for something. But all he smelled was youth, coddling, and weakness. He needed strength, viciousness, anger and around him walked kids to and from class, their biggest concerns: Am I ready for that history test? How will I write a whole philosophy paper in one night? Am I going to get laid tonight? Am I pregnant? Their petty thoughts disgusted him. But this town was all he had to work with.

He sat on a bench, trying to look inconspicuous, but suspected his seven-foot, blood splattered frame was anything but. He wove thoughts around him to make it easier for mortal eyes to slide past him. Then he waited. Watching each child as they walked by, smelling the scent of their blood, tracing it, following it back to its origin to the rest of the child's family. Mostly it led back to lawyers, business men, and doctors. Those that could afford to put silver spoons in these children's mouths. They could be ruthless in their own right, but not bloody. Not hunters.

He was beginning to think that he would expire right there on the bench before he could find what he was looking for, when he saw him. A boy, walking across campus, anger infusing him. The Beast searched the boy's bloodline and smiled. Yes, this would work just fine.