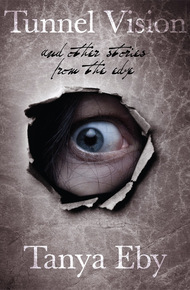 Tanya Eby is the author of "Foodies Rush In", "Easy Does It", "Blunder Woman", "Pepper Wellington and the Case of the Missing Sausage", "Tunnel Vision and Other Stories from the Edge", and "Synchronicity".

Her work, though genre-crossing, has the same elements of quirky characters in strange situations. At times comedic, at times heartfelt, and even at times downright creepy, Tanya Eby seeks to write stories that are engaging and resonate with the reader. She is also an Audie-nominated narrator with hundreds of books to her credit. She lives in Grand Rapids, Michigan with her tiki-obsessed husband and two quirky kids.

Dr. Elliott Kinney arrives at the Northern Michigan Insane Asylum ready to ease psychological suffering with his modern techniques. Kinney is also running away from the torment of a dead sister and perhaps the loss of his own sanity.

Under the asylum, in The Tunnels, a group of inmates travel freely within the shadows, keeping and tending to their own secrets. Kinney's arrival will change everyone—especially Alma, a child born in the asylum, and raised to womanhood in secret.

"Tunnel Vision" twists and turns, and is, in essence, a psychological Frankenstein.

Along with the novella "Tunnel Vision", Tanya Eby includes three stories from the edge: "The Perfect Neighbor", "The Shedow", and "Birth Day". These stories are cold and haunting, and deal with the darker difficulties of what it means to be a woman in our new millennium.

There was something dark and seductive about this book that made it difficult to put down at first. The interludes I found compelling, well written, and haunting. The story bounces between these ethereal narratives and the real world. The impending collision is worth the read. – Martin Kee

Dark. Cold. Aboveground, a fierce ice and windstorm caught the world as the gales rushed through the bay. Teacup ships cracked on the shore. The wind—now a rabid beast— howled and moaned as it tore through woods. The storm encased trees in glass, bent their backs, shook them to the roots, lifted saplings as easily as picking a mushroom and spun an outhouse near Kids' Creek. We huddled in our wards, in private rooms, in cells, in the corridors, in the crevices. We moaned, too.

In the Tunnels, all was quiet. Except for the panting. Deep in the Tunnels, the storm above was barely a breath. It could not touch the

earth's heart, only the surface, and we huddled deep below in the place of no light. We were darkness and shadows blending. The Tunnels surrounded us and hid us.

We crawled from our caged rooms. The iron bars did not hold us in—not as they intended—but kept the outside world from interfering with us, which is exactly what we wanted. The bars were iron, the doors locked, but we were liquid and slipped down into the corridors, melted into the floor, swirled down, down, down to the place where she hid. Blackness, thick as molasses, swaddled us.

You could not see her if you looked; but we could see everything. We were everyone and everywhere. We knew she was there even though she was quiet as a secret, and we tried to swallow our laughter, our excitement. There she was, beyond one of the final bends of The Tunnels, sitting on the cold cement ground, pressed up against the weeping stone walls. She was a patch of gray cloth and milky skin against the black of the Tunnel walls. We knew what to look for and how to look. We closed our eyes and listened. That's how you find things in the dark. Not with your eyes, but your ears. Listen. Listen. We hissed the word, sent it slithering through the tunnels until the sound found her and bounced back.

Sharp breathing, the panting of a feral animal, she crouched, waiting. She put her finger to her lips. Husssshhhhh, she whispered, as much to herself as to us. We mustn't let the doctors and nurses know. They must never know. Husssshhhhh. It lost the sense of a word and became just another part of the ice storm above. Husssshhhhh: her finger to her lips. Our fingers rose to our lips and answered her. We would hush too. Only the wind and cracking of ice would be our voice.

She was a feral dog and protected her growing secret: a bone in her stomach.

But it was not a bone, of course. No single bone grew and changed shape. No. She carried so much more. In the corners of our minds, we knew what happened. She was one person becoming two. She did not associate it with the animal functions she'd done countless of times with men, although some of us knew it had caused the swelling of her stomach. Men. Always the men who do those things.

We had watched her in the woods, in the doctor's office, and one night down in the Tunnels itself. Who could blame her such pleasure? We were envious. We watched the orderly around her. How he first noticed her. Tried to not notice her. How his hand would lightly touch her back when he asked a question. "Would you like to take your walk now?" he'd say. He never ordered her, never told her, "Take a walk! Put on your shoes! Stop your wailing!" No. To her, he was kind. He offered her the soft-kindness that hid a sharp edge of malice. He wanted. He was a dog. He gave her things, yes—extra bread, a bit of cake, a blue ribbon—but he wanted all the more. He even gave her a pearl button. She kept it under her tongue to keep it a secret as well.

She showed him the dark place. The dark place between her legs, of course, but more than that. Our hidden place. The Tunnels. The Tunnels were built under the asylum to transport refuse, they said, but really it was to hide us. To hide those of us here they did not want the outside world to see. There were extra arms to The Tunnels the doctors had forgotten about over the years. We think the architect may have secretly been one of us, for he'd built us a hidden playground. A place where we could be free.

She showed the orderly the way down. Through twisted doorways and passages, the intricate system of bends and curves in the endless dark. She took his hand, and he blindly followed her until, surrounded by dark, she let him find her with his mouth, and that had been the beginning of the end for him. They met there countless times to grunt and paw at each other, to nuzzle like dogs. He became an animal too, we thought with satisfaction.

And aren't all men this close to being like us? Take away the clothes and the jobs and give them something to hunger for, and we are no different. We are all animals, especially when we give over to feeling. He licked and panted and eventually gave her pleasure in a way very different than the button. The button at least she could keep.

We helped her keep silent.

When the child emerged from between her legs, the woman did not cry out or scream. Her daughter entered a world of darkness and silence. We caught Alma, her entrance into the world. We cleaned her mother up, helped her to her bed. We took the child and hid her. When her mother slipped from this world altogether at, we think, the same time the Great Oak in the gardens split in half with the weight of ice, silence overwhelmed the tunnels.

The child understood us, you see. She was happiest in the darkness of our supportive arms.

We vowed we would watch over her, protect her, nurture her. She would be our daughter, a daughter born from our dark minds, raised to live the way we would live if not for the rules. We offered a hundred hands to protect her. A hundred pairs of eyes to watch over her. We wanted nothing in return.

We thought we knew everything, sensed everything. Somehow, though, we didn't see what was coming. How could we? We understand this thing they call madness, our own and each other's. We have learned to navigate those waters. It's easy to do. Just figure out the way each mind bends and go with it; do not try to reshape the path. We thought we were in control.

At first, we did not recognize Dr. Kinney as one of us. No. Only afterwards, after pawing through his diaries, comparing notes, and sending information through the wards, person to person, did we fully understand what had happened, and our understanding comforted us. We did not recognize his madness because he was not like us. No. Dr. Kinney was not mad; he was evil. There is a profound difference.

Pure silence filled the Tunnels at the birth of our beloved Alma. There would be silence for years to come. Only aboveground did the world cry out and moan.