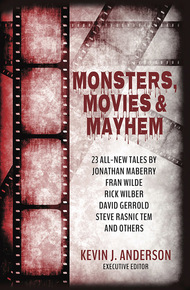 Sometimes you go to the movies. And sometimes, the movies—and their monsters—come to you. At any moment, without notice, monsters once relegated to the screen become a reality. Aliens and demons, dragons and ghosts, werewolves, vampires, zombies, and seemingly ordinary people who are just plain evil.

Gavin Funke sat in the dark and watched his monster movies.

One after the other.

Well into the night.

He had the theater mostly to himself. The popcorn was fresh and the smell of it filled the entire theater with buttery goodness. The Coke was cool, not cold, but that was okay. Making ice was a luxury, and he needed as much juice as the generators would give him to run the projectors and the air conditioning.

The theater was nearly quiet. A few people made some noise, but there was always a little of that. Over in the corner, in the darkest and most private spot in the auditorium he could hear soft moans.

Gavin didn't care about that. He was not that kind of voyeur.

He sat with his feet wedged between the backs of the two seats in front of him, his sneakers parted in a Vee so as not to obstruct his view. On the screen a black man in a stained white shirt was hammering boards over the windows of a farmhouse. There were bangs on the doors as clumsy fists pounded on the doors and walls. Anyone with half a brain could tell those boards weren't going to stop anyone. Even if Gavin hadn't seen this movie a dozen times he'd know that. They were nailed crookedly and in haste. And they were straight-nailed, not toe-nailed. Not screwed securely. Wouldn't take much at all.

"Dumbass," he yelled at the screen.

But the actor playing the guy in the movie with the monster didn't listen. None of them ever did. They did stupid things either because they were stupid characters,. And they died. A lot of them died. Sometimes all of them died.

But not Gavin Funke.

He was the star of this movie and he was not going to make any mistakes at all. Not one.

Sure, there had been a learning curve, but the point was that he did learn.

He dug into the tub and pulled out a fist of popcorn, not caring that some of it fell onto his shirt or lap, or onto the floor. That was what brooms were for.

A foot kicked his chair but he didn't bother turning and instead. "Mom! Shhhhh!"

Gavin abruptly stood up, shot his mother a lethal glare, and moved to the row in front. Not the perfect distance, but still good. And no kicking.

He ate the popcorn more slowly, and it lasted all the way up until the hero got killed. He kept hoping the movie would —just for once— end differently. But it stubbornly refused to do so.

Gavin slept in because he hated morning. That's why he arranged the movie marathons to go well past midnight. Last night was zombie night. From one yesterday afternoon until the last credits rolled up a minute after five a.m.

He was bloated with popcorn and Milk Duds and Night & Day and some shady off-brand beef jerky because, hey, he needed protein and all the good stuff was gone. Marathons were good for the soul but hard on the colon, and he spent a bad hour in the chemical toilet out by the dumpsters. Gavin was wise, though, and daubed Vicks on his upper lip to kill the smells. He read nearly three chapters of an autobiography by an actor with a huge chin. It was pretty funny, and laughing helping his colon do its business.

Then he went inside, took a shower, dressed in new clothes that came from JC Penny. The belt was a tighter fit than it should have been and he wondered if all that candy was nudging him up a size. That could be a problem because all he could manage was off the rack.

"No more Milk Duds," he promised. But that was a low bar because he didn't have that many boxes left anyway. No way he'd cut out the Night & Day because the licorice helped him move things along.

Gavin turned the house lights up and cleaned the theater floor. Nothing worse than walking on all that sticky mess. As he worked he listened to Tom Waits songs on his bluetooth earbuds. He liked Waits' older stuff, back when it was more dramatic and melodic. Currently Tom Traubert's Blues was breaking his damn heart, like it always did. Gavin had his own theories on what the lyrics meant. They were timeless. People leave, things end, hearts get broken. Hardly mattered what the singer intended. That guy was dealing with own blues. While he knelt down to fish under a chair with a dust brush he wondered if Tom Waits was still alive. Probably. Guy like him would find some way to figure things out. He'd get his crap sorted. Gavin was sure of it.

Maybe one of these days he'd take a drive north to find out. He thought Waits lived in Pasadena or someplace like that. Up that way. But the singer had been raised right here in San Diego, Gavin thought.

The song ended and Gavin paused to push the buttons to play it again, but then he stopped, looking down at the debris his last brush sweep had gathered. There was some of his own popcorn, and a stray Milk Dud that still looked good.

Gold. Slender. Very pretty. With delicate old world Viking tracery that twisted all the way around the band. He picked it up and sat back on his heels. The ring was dusty, as if it had been there a long time.

Had it? Could he have missed it the other times he cleaned the floor?

It made his heart hurt and the tears ambushed him. He didn't even feel them coming but suddenly they were there. Shoving their way out of him, choking him, kicking at the walls of his lungs. He caved forward so suddenly his forehead banged against the floor. It hurt but he didn't care. Not one bit.

He closed his fist around the ring and tried to push the fist into his chest. If he could have managed that he'd have buried the ring in the tear-moist soil of his heart.

The single word escaped his lips. He blubbered it, and the word slipped free and fell onto the dirty floor.