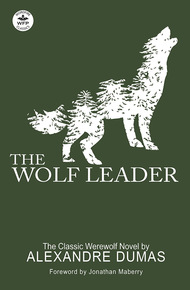 Born Dumas Davy de la Pailleterie, he adopted the Dumas family name from his grandmother, a Dominican slave. Despite encountering societal prejudice because he was one-quarter black, Dumas managed to break into French literary circles and became one of the most respected and successful authors of French literature.

He began writing plays after working as a scribe for the Duke of Orleans (later named King Louis Philippe) during the 1830 revolution. Dumas was a prolific writer, best known for novels such asThe Three Musketeers, The Man in the Iron Mask,andThe Count of Monte Cristo. His work has been translated into more than 100 languages and adapted into a multitude of films.

After suffering a stroke, he died on December 5, 1870, in Puys, France, and was buried in the family vault. In 2002, he was exhumed and reinterred in the hallowed Pantheon in Paris, among other French luminaries.

The Wolf Leader by Alexandre Dumas

One of the first werewolf novels ever written! A lost classic from the author of The Three Musketeers and The Man in the Iron Mask. What's the next best thing to having a walking wolf grant your wishes? Would it be enough to take revenge on those who oppose you?To Thibault the shoemaker, that pact is worth more than gold. Or at least more than the single, dark hairs on his handsome, youthful head. What could go wrong when one can simply wish their enemies out of the way? Alexandre Dumas brings us a story of envy so ravenous, it eats its own heart.

"A complex and nuanced novel that, upon repeated readings, yields more insight and entertainment even after more than one hundred and sixty years."—Jonathan Maberry, New York Times bestselling author of The Wolfman

And How This Tale Became Known to the Narrator

Why, I ask myself, during those first twenty years of my literary life, from 1827 to 1847, did I so rarely turn my eyes and thoughts towards the little town where I was born, towards the woods amid which it lies embowered, and the villages that cluster round it? How was it that during all that time the world of my youth seemed to me to have disappeared, as if hidden behind a cloud, whilst the future which lay before me shone clear and resplendent, like those magic islands which Columbus and his companions mistook for baskets of flowers floating on the sea?

Alas! Simply because during the first twenty years of our life, we have hope for our guide, and during the last twenty, reality.

From the hour when, weary with our journey, we ungird ourselves, and dropping the traveler's staff, sit down by the wayside, we begin to look back over the road that we have traversed; for it is the way ahead that now is dark and misty, and so we turn and gaze into the depths of the past.

Then with the wide desert awaiting us in front, we are astonished, as we look along the path which we have left behind, to catch sight of first one and then another of those delicious oases of verdure and shade, beside which we never thought of lingering for a moment, and which, indeed we had passed by almost without notice.

But, then, how quickly our feet carried us along in those days! We were in such a hurry to reach that goal of happiness, to which no road has ever yet brought any one of us.

It is at this point that we begin to see how blind and ungrateful we have been; it is now that we say to ourselves, if we could but once more come across such a green and wooded resting place, we would stay there for the rest of our lives, would pitch our tent there, and there end our days.

But the body cannot go back and renew its existence, and so memory has to make its pious pilgrimage alone; back to the early days and fresh beginnings of life it travels, like those light vessels that are borne upward by their white sails against the current of a river. Then the body once more pursues its journey; but the body without memory is as the night without stars, as the lamp without its flame… And so body and memory go their several ways.

The body, with chance for its guide, moves towards the unknown.

Memory, that bright will-o'-the-wisp, hovers over the landmarks that are left behind; and memory, we may be sure, will not lose her way. Every oasis is revisited, every association recalled, and then with a rapid flight she returns to the body that grows ever more and more weary, and like the humming of a bee, like the song of a bird, like the murmur of a stream, tells the tale of all that she has seen.

And as the tired traveler listens, his eyes grow bright again, his mouth smiles, and a light steals over his face. For Providence in kindness, seeing that he cannot return to youth, allows youth to return to him. And ever after he loves to repeat aloud what Memory tells, him in her soft, low voice.

And is our life, then, bounded by a circle like the earth? Do we, unconsciously, continue to walk towards the spot from which we started? And as we travel nearer and nearer to the grave, do we again draw closer, ever closer, to the cradle?

I cannot say. But what happened to myself, that much at any rate I know. At my first halt along the road of life, my first glance backwards, I began by relating the tale of Bernard and his uncle Berthelin, then the story of Ange Pitou, his fair fiancé, and of Aunt Angélique; after that I told of Conscience and Mariette; and lastly of Catherine Blum and Father Vatrin.

I am now going to tell you the story of Thibault and his wolves, and of the Lord of Vez. And how, you will ask, did I become acquainted with the events which I am now about to bring before you? I will tell you.

Have you read my memoirs, and do you remember one, by name Mocquet, who was a friend of my father's?

In either case, then, it is of the first importance that I should bring Mocquet clearly before your mind's eye.

As far back as I can remember, that is when I was about three years of age, we lived, my father and mother and I, in a little Château called Les Fossés, situated on the boundary that separates the departments of Aisne and Oise, between Haramont and Longpré. The little house in question had doubtless been named Les Fossés on account of the deep and broad moat, filled with water, with which it was surrounded.

I do not mention my sister, for she was at school in Paris, and we only saw her once a year, when she was home for a month's holiday.

The household, apart from my father, mother, and myself, consisted—firstly: of a large black dog, called Truffe, who was a privileged animal and made welcome wherever he appeared, more especially as I regularly went about on his back; secondly: of a gardener, named Pierre, who kept me amply provided with frogs and snakes, two species of living creatures in which I was particularly interested; thirdly: of a negro, a valet of my father's, named Hippolyte, a sort of black merry-andrew, whom my father, I believe, only kept that he might be well primed with anecdotes wherewith to gain the advantage in his encounters with Brunel, and beat his wonderful stories; fourthly: of a keeper named Mocquet, for whom I had a great admiration, seeing that he had magnificent stories to tell of ghosts and werewolves, to which I listened every evening, and which were abruptly broken off the instant the General—as my father was usually called—appeared on the scene; fifthly: of a cook, who answered to the name of Marie, but this figure I can no longer recall, it is lost to me in the misty twilight of life; I remember only the name, as given to someone of whom but a shadowy outline remains in my memory, and about whom, as far as I recollect, there was nothing of a very poetic character.

Mocquet, however, is the only person that need occupy our attention for the present. Let me try to make him known to you, both as regards his personal appearance and his character.