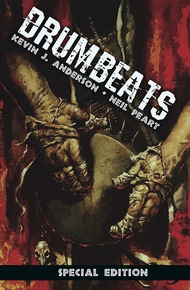 Early in their three decades of correspondence, Neil Peart sent Kevin J. Anderson extensive descriptions and travelogues of his adventures bicycling solo across Africa. Peart painted a vivid and unsettling landscape as memorable as the lyrics to his songs.

Anderson, award-winning and bestselling fantasy and science fiction author, used those descriptions as the backdrop for plotting an intense, atmospheric dark fantasy story that followed Peart's experiences, though with a much more ominous twist. The two used their respective strengths to weave a memorable tale that will linger long after the last page.

This special illustrated edition includes Anderson's new introduction, written after Peart's death on January 7, 2020, as well as the original Afterword Peart wrote for the story.

The letter came on a bad day.

I was working as a technical writer for the Lawrence Livermore National Laboratory, where I produced respirator safety manuals and chemical protective clothing handbooks. I had to deal with DOE regulations, editing the commas in health and safety codes, going to meetings, compiling annual reports, and delivering rush presentations.

I had always dreamed of becoming an author, but this wasn't what I'd had in mind. At least I spent my evenings and weekends working on my novels.

The real-world tech-editor job offered plenty of challenges, problems, and chances to screw up. On that particular day I had been hit from several sides: An important annual report, produced by me, was released to great fanfare… and somehow the author's name was misspelled on the title page. Also, I had put together a very important rush presentation on laser technology, while the anxious researcher was waiting to race off to Washington, DC to beg for continued funding; but when the slides came out of the photo lab, somehow the techs had printed all the photos upside down, and there was no time to fix it.

The biggest blow came from another direction. This was the day that one of the largest and most important magazines in my field, Asimov's Science Fiction, ran a review of my second novel, Gamearth. It was my first major review in a national market, distributed to all my professional peers… and the reviewer tore me to shreds.

Sullen, I came home to my little townhouse in Livermore, California. I was just a single guy hoping to make a living as a writer someday. I'd published a handful of short stories and two paperback novels for minor advances, but nobody knew my name. Bummed, I got the mail, sorted through the bills, the grocery flyers, the junk mail.

And I found an envelope with a Canadian stamp. The return address said N. Peart.

My heart skipped a beat. It couldn't possibly…

I opened the letter to find a three-page single-spaced letter from Neil Peart, legendary drummer and lyricist for the rock band Rush. A man whose work I had admired since my high school days. He had written to tell me how much he loved my first novel, Resurrection, Inc.

It was no longer a bad day.

Now, this wasn't entirely a coincidence. My novel, published by Signet Books in 1988, had been greatly inspired by the Rush album Grace Under Pressure [1984]. When I received my first author copies of the garish paperback with a hideous-looking cover (complete with stone skull and rocket ship), I autographed copies to the three members of Rush, acknowledging their influence on the work, and mailed the package off to Mercury Records, where I assumed the envelope just went into a warehouse similar to where the Ark of the Covenant is stored. Since so much time had passed, I'd forgotten about it and no longer expected any response.

In the letter, Neil wrote, "It has taken a year, but at last I can write to you and tell you that your book did indeed make it to me. Yes—I might have written earlier with that information, but now, finally, I can also say that I have read it. Just as you could only hope that your message would make it through all the intermediary barriers to me, so too do I hope that this delinquent response will actually make it to you."

"I have finally read it. Just finished it last night. And more importantly, I thought it was very, very good. More about that later…"

As a science fiction nerd, I have been attracted to Rush music since my teenage years with their epic fantasy songs, science fiction dystopias, space adventures—the lyrics were all so fundamentally different from the usual "Ooh baby baby" pablum on the radio. I was a skinny kid with a bad haircut, thick glasses, and hand-me-down clothes. I had no experience with girlfriends, so love songs did not resonate, but I did read a lot of books. And Rush music spoke to me.

Grace Under Pressure came at exactly the right time, when I was developing my first novel, and the lyrics fired my imagination. I wrote Resurrection, Inc. with the album playing over and over, and the images conjured by the songs made their way into the story.

When the paperback was published, I wrote a dedication, right up front, "To Neal Peart, Geddy Lee, and Alex Lifeson of RUSH, whose haunting album Grace Under Pressure inspired much of this novel." (Yes, shudder, I actually misspelled Neil's name.)

Neil wrote, "Regarding your dedication to the humble members of Rush, needless to say I am pleased and flattered by it, but I think you do yourself a disservice by saying that your work was even partly inspired by the songs of Grace Under Pressure. (Though since I consider that to be one of our most underappreciated albums, I am glad to see it get some attention, however undeserved. And your description of it as 'haunting' is one of the highest compliments, in my view, that can be attached to a work of art.)

"I loved the echoes of 'Red Sector A' and 'The Enemy Within' which you wove into your story, but apart from that you have gone so far beyond anything I have experienced in lyrics that the dedication seems unmerited.

"Never mind—it's still a very nice thing, and I'm proud of it."

Best of all, at the bottom of the letter, he added a little P.S. that I took to heart.

Neil and I began corresponding, and we immediately clicked. This was in the days before quick email exchanges—no, Neil and I wrote full-on letters, many pages long, each one an epic missive. I once teased him for going on at "Peartian lengths," an adjective that he took to heart and repeated in other correspondence.

I loved to hike. He loved to bicycle long distance. I would describe for him my mountain trips, my expeditions in Death Valley. I sent him a photo from the summit of Telescope Peak in Death Valley, a magical place with a unique perspective. In one direction, you can see Badwater Basin, the lowest point in the continental U.S. (279 feet below sea level), and in another direction you can see Mount Whitney (14,505 ft), the highest point in the continental U.S. (Much later, after many personal tragedies, Neil went to Telescope Peak himself and used that metaphor in his lyrics for the song "Ghost Rider"—"from the lowest low to the highest high.")

Neil himself took several amazing trips, and they seem unbelievable to me now. He would go off to Africa with his bicycle and go off by himself on dirt roads through the wildest country and the poorest villages, trying to speak the language, communicating with smiles and hand gestures, sometimes talking his way through armed guards at checkpoints. There he was, a famous rock drummer on a bicycle, just experiencing Africa.

"During the past few years I have become increasingly interested in prose writing myself, and have been slowly trying to 'train' myself in the art of expressing thoughts and feelings in 'good' writing. Nothing so ambitious as your undertaking; so far I have limited myself to attempting to describe some of my travels; to put into words the experiences and impressions of my adventures in China, Africa, and on different cycling expeditions. Not aiming for publication as yet, but simply as exercises, as good training ground for learning how to use words. My apprenticeship, as it were."

And what an apprenticeship!

His descriptions were incredible. He went on for paragraphs about African villages he had visited, people he had met, adventures he'd had, and a unique African drum he had purchased from a village artisan. As part of one expedition he'd even climbed Mount Kilimanjaro, chronicling the grueling days-long hike from sea level all the way up to 19,308 feet. He mocked the tourist brochure that blithely claimed, "Any reasonably healthy adult can do it."

Eventually, Neil put together his experiences around the Kilimanjaro climb in a little self-published book, The African Drum. I helped him with some layout advice, which was what I did in my day job for the Livermore Lab, and he printed up a small number of copies for friends and family. (The African Drum remains one of my most precious treasures.)

Off and on, Neil and I had mused about collaborating on something, possibly lyrics (but I am by no means a poet), though we never found a realistic project that worked for both of us.

Then in 1993 editor Jeff Gelb invited me to contribute a story to an anthology he was putting together, Shock Rock II—horror/dark fantasy stories with a rock music theme. I immediately thought of a creepy adventure modeled on Neil's experiences in isolated Africa and some of the strange villages he had encountered. Hmmm, I could pull generously from the descriptions and landscapes that Neil written about his real travels, vivid and colorful details that I would never be able to pull off on my own. I suggested to Neil that I would write the actual story with a setting painted from his words, and we'd call it a collaboration. He was excited by the idea, and when I asked Jeff Gelb if he would like a story coauthored with the drummer from Rush, he responded with a dubious letter asking me to prove that I really knew Neil Peart (!).

I worked on the draft of "Drumbeats," developing the plotline and the characters, which was my forte, and layering in the rich, sensory details of the setting, which was Neil's forte. Neil enjoyed working over the draft and sending it back to me.

Shock Rock II was published by Pocket Books in 1994, and when I sent Neil his half of the $250 payment (a very reasonable professional rate), he responded jokingly, "I guess I won't quit drumming anytime soon."

And I'm glad he didn't. Neil invited me backstage to every Rush concert tour since 1990.