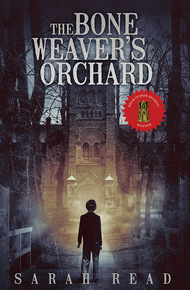 Sarah Read is a dark fiction writer in the frozen north of Wisconsin. Her short stories can be found inGamut,Black Static, and other places, and in various anthologies includingExigencies,Suspended in Dusk,BEHOLD! Oddities Curiosities and Undefinable Wonders, andThe Best Horror of the Year, Vol. 10. Her novelThe Bone Weaver's Orchardis now out from Trepidatio Publishing, and her debut collectionOut of Waterreleased in late 2019. She is the Editor-in-Chief ofPantheon Magazineand of their associated anthologies, includingGorgon: Stories of Emergence. She is an active member of the Horror Writers Association. When she's not staring into the abyss, she knits.

He's run away home. That's what they say every time one of Charley Winslow's friends vanishes from The Old Cross School for Boys.

It's just a tall tale. That's what they tell Charley when he sees the ragged grey figure stalking the abbey halls at night.

When Charley follows his pet insects to a pool of blood behind a false wall, he could run and let those stones bury their secrets. He could assimilate, focus on his studies, and wait for his father to send for him. Or he could walk the dark tunnels of the school's heart, scour its abandoned passages, and pick at the scab of a family's legacy of madness and murder.

With the help of Sam Forster, the school's gardener, and Matron Grace, the staff nurse, Charley unravels Old Cross' history and exposes a scandal stretching back to when the school was a home with a noble family and a dark secret—a secret that still haunts its halls with scraping steps, twisting its bones into a new generation of nightmares.

Charley Winslow pressed his teeth together to keep them from cracking as the car grated along the stone lane to the ancient abbey. His fresh pine tack box weighed heavily on his bony knees. The glass jars inside clinked and rang like small bells. He tried to keep them steady, imagining the terror in the hundreds of eyes inside.

You must be even colder than I am.

He pulled a yellow linen scarf from his neck, untangling it from the length of twine that suspended his numbered card. He held the scarf briefly to his nose and breathed deeply before lifting the lid of his box and tucking the cloth carefully around his specimens.

The scenery outside his window had changed from sweeping fields to dry brush and stone, windswept shrubs that seemed to want to tear themselves up from the land.

Their roots are strong. Deep. Maybe this wind will carry me away.

The great stone edifice emerged from the rock of the moor, black against the sky. At the center of the roof, a tower rose, its bell a silhouette in its carven frame. Lit windows dotted the abbey's long corridor arms, stretching across dark lawns.

They have electric lights.

His gaze traced the shape of the building by their glow. One wing remained dark, windows black and empty, so the whole of it was nearly invisible in the darkness until its shadow stretched across the car. Charley peered up at its stained bricks and shuddered.

The driver slowed the car, and the millstone wheels ground to a halt in the gravel. The man snugged his cap down tight against the wind and got out. Charley heard the crash of his trunk hitting the stones. His door sprang open, and a rush of cold stole his breath.

"No!" Charley gripped the rough wood closer to his chest and slid from the seat to the drive. He swayed, unaccustomed to the sudden stillness around him. He'd been a body in motion for months—from Cairo to Algiers, to sea, through the straits, north and north again, colder and colder to Portsmouth. Then by train, north and colder, through London and York. Then in the car, north again and colder still, to these dark moors and the reaching stone arms of the Old Cross School for Boys. His body didn't know how to be still.

He tried to steady himself and felt the driver's hand on his shoulder.

"Watch tha'sen up those steps, lad. Pull the bell, an' Miss Mary will see tha'rt fed and warmed." He nudged Charley toward the tall door. The wind shrieked, plucking Charley's battered tag from the twine around his neck and carrying it off into the dark. His heart leapt as if to chase it, until he remembered he didn't need it anymore. Don't lose your tag, his father had said. It's how they'll get you to the right place.

From where he was standing, the school seemed to take up the whole sky. He couldn't even see any stars. How can this be the right place?

The gravel became flagstones, and the stones became stairs as the face of the old abbey towered over him. In the shelter of those rough stones, the howl of wind quieted to a distant moan.

Charley felt the cold of the stone through his shoes. He hoisted his box and imagined he could hear the enraged scurrying of a thousand chitinous legs. He squeezed it to his chest and hoped his heartbeat might calm them, that his body might somehow keep them warm in this icy wind. He pulled the bell with his teeth. The car's guttural engine idled as the driver waited to confirm that his charge had been delivered.

Charley rested his chin on the pine, caught a whiff of its bitter freshness, and wondered if the jars inside might have saved him one last breath of Cairo.

The door's hinges screamed, and a seam of light appeared in the center of its wide panel. Charley started, straightened, and knew that the hammering of his heart would only stir his charges more.

The car pulled away, digging into the gravel and vanishing into the dark. The headlamps shrank to pinpricks across the moor. Charley felt as though the lifeline was being unwound from his heart.

A lean woman in a black dress stood behind the door. Her pinched face was lit in flickering silhouette from a nearby candle. Her small eyes darted from Charley to his box, to the worn trunk on the stones behind him. "Term doesn't start for days yet," she said, holding the door as if to close it again.

"Wait—Ma'am. I don't have anywhere else to go. Or any way to get there, if I did." Charley's back was beginning to ache from the heavy box.

The woman's thin lip curled. "The village is three miles down the lane. This isn't a hotel. Someone there will take you in."

"Please, I don't know anyone in the village. I don't even know what it's called. I've just come from Cairo, where my father…. He sent me away. He sent me here." Charley felt his face begin to heat. If he'd had any money, he'd have turned and walked those three miles and bought a ticket south. As many tickets south as it took to get back to his father.

The pinched woman sighed. "I guess you'd best come inside. I'll send someone for your trunk." She opened the door wide, and Charley stepped through the stone arch into the school. The door swung shut behind him with a bang like a fortress cannon.

"Your name?" The woman in black lifted her candle from a small stand that supported a marble bust. The side of the statue's face was blackened, as if by a hundred brief encounters with the candle.

"Wait here. I'll find where you're meant to go," she said, and left, taking the light with her.

No, you won't. Not here. He'd never felt so out of place before.

In the darkness, he felt the heaviness of stone all around him like a tomb. He felt the hollowness of the long halls, cold as a lost knife and dark as a throat.

The rustling inside his box sounded like a whisper.