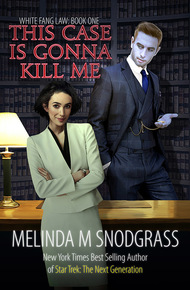 Melinda M. Snodgrass was born in Los Angeles, California, but the family moved to New Mexico when she was five months old. Under her father's tutelage she was given every possible opportunity—she learned to ride, shoot, swim, and fly fish. She sat in on his business meetings and traveled with him from a young age.

She inherited her father's musical ability and studied ballet, voice, and piano. She starred with the Civic Light Opera and performed the role of Gretel with the New Mexico Symphony Orchestra's Hansel and Gretel. Her love of music took her to Vienna, Austria, where she studied voice at the Conservatorium der Stadt Wien.

After graduation she practiced law for three years working first for Sandia National Laboratories, and then a corporate law firm. She quickly discovered that while she loved the law, she wasn't terribly fond of lawyers. At the urging of Victor Milan, she tried writing and never looked back.

Melinda M. Snodgrass has written a number of books and scripts for television. In 1984, she and George R.R. Martin developed the Wild Card series, a shared world mosaic series with a focus on the real impact of superheroes in our world. The series is 28 books strong, and was nominated for a Hugo award.

For Hollywood Melinda M. Snodgrass wrote a spec script for Star Trek: The Next Generation. The script, "The Measure of a Man," was nominated for the Writer's Guild Award for outstanding writing in a drama series and has been shown in the museum of computer science and artificial intelligence in Paris, France. It has also been voted as one of the ten best Star Trek episodes from all series. She worked on Reasonable Doubts and the Profiler, and has written episodes for The Antagonists, Sliders, Strange Luck, and Odyssey 5, to name only a few. She also scripted an adaptation of Star Blazers for Disney.

In her spare time, she spends time with her two beautiful Lusitano horses, her Grand Prix stallion Vento da Broga, and a buckskin gelding, Donhador. She is an accomplished horsewoman, riding and showing in dressage.

This Case Is Gonna Kill Me by Melinda M. Snodgrass

Fresh out of law school, Linnet Ellery is offered a position at of one the most prestigious law firms in New York. However, the office of Ishmael, McGillary and Gold, as a White-Fang law practice, caters to supernatural clients who are among some of the most powerful beings in existence.

Linnet will need all of her vaunted luck to avoid the cutthroat office politics, backroom deals, supernatural killers, and centuries-old schemers that surround her on a case that could shake the halls of power both mortal and immortal to their foundations.…

"This case is gonna kill me."

I stared down at Chip Westin and tried to think of an appropriate response. Actually, I would have been happy with any response, but nothing came to mind. This was my immediate boss, and these were the first private words he said to me after McGillary, one of the senior partners at Ishmael, McGillary and Gold, had introduced us.

What does that mean, I thought miserably.

Westin looked to be in his early fifties, balding, wearing an expensive suit that probably looked good when he was thirty pounds lighter. His complexion was pasty, but he wasn't a vampire. His cluttered office's one window was blocked by a stack of books and files, and I suspected he didn't get out much. His jowls looked like they were melting toward his collar, but it seemed to be caused less by gravity and more from bone-grinding weariness and frustration.

Thus far my first day at Ishmael, McGillary and Gold, one of the premier White-Fang law firms, had consisted of signing my insurance and pension papers, designating who would receive said pension should I die while still employed by the firm, being shown my small cubbyhole of an office, and being introduced to Westin.

"You'll be helping with his cases," McGillary had said as he led me toward Westin's office. Then he'd amended that and added in a peculiar tone of voice, "Well, one in particular." I could only assume Westin's prediction of imminent death was related to that case.

"Okay. Maybe you should tell me about it," I said. I would like to have sat down, but there was no available surface that wasn't covered with papers, books, or files.

"It's a probate case. Back in '68, Captain Henry Abercrombie was serving in Vietnam when a werewolf went rogue and bit him. That was just after the Spooks went public, and the military had to admit how many hounds were actually serving in the armed forces."

I blanched a bit at the pejorative term, but let it pass. After all, I'd just met the man. Westin continued.

"Anyway, he had a wife and three kids back in Newport News, and shortly after he came home on medical leave he separated from his wife, Marlene. He didn't divorce her because of the kids, and he kept helping with expenses, but he never lived with them again. Then three years later he leaves the marines and founds a company, Securitech."

I choked. Securitech was the largest private military force in the world and had to be worth close to a billion dollars. They had serious clout. The last time Securitech had been in the news was when they'd received a thirty million dollar no-bid contract from the DOD. A crusading senator from Minnesota had tried to reopen the negotiations, but the investigation had been closed down by the White House and the Justice Department, and the senator had abruptly resigned from Congress stating the ever popular need to spend more time with his family.

Westin continued. "In 1980, Abercrombie decided to sire a werewolf heir, and he picked his second in command, Daniel Deegan. At this point the kids are grown up, so Abercrombie divorces Marlene. Then seventeen years ago Abercrombie was killed in a car wreck in Somalia. His human ex-wife, Marlene, and the kids—though they're not really kids any longer, they're in their fifties—retained us to challenge the will that left the company to Deegan."

"In the beginning we raised the issue of the wording in the will about progeny. The lawyer who drafted the will for Abercrombie threw in the word natural in front of progeny. We wanted to argue that sex resulting in pregnancy and birth is more natural"—he made quote marks with his fingers—"than biting somebody."

A Supreme Court decision came floating to the front of my mind. Geisler had established that progeny could mean the werewolf or vampire the testator had sired. In fact, the court had contended, that relationship was closer than the relationship with children produced by sex and birth because it showed such a high level of intent.

Westin nodded. "Yeah, kicked us right in the nuts. Sometimes I wonder if there's a secret Spook on the high court."

There it was again, the pejorative term for vampires, werewolves, and Álfar being used by a lawyer working at a White-Fang law firm. I assumed he had as-yet-undiscovered talents that made him valuable to the senior partner despite his attitude. Judging by the piles of papers in the room, he was probably the firm's resident research monkey, a highly esteemed position since most lawyers hated the role. Then I wondered if he had any idea that I had been fostered in a vampire household and that I might find this offensive. Again, I hid my reaction. Calling him out for being a bigot was not a smart move the first day on the job.

"So, where does that leave us?" I asked. It felt good using the possessive. Our case. It made me feel like a real lawyer.

"Geisler was years ago."

"Yeah, we've been in arbitration for sixteen years."

I stared around at the paper towers, and felt my gut sinking toward the soles of my feet. "So, all this…" I gestured.

"Depositions. Interrogatories. Transcripts of arbitrations. I got a few other smaller cases…"

His voice trailed away, and he looked around the office with the air of a confused dog. I was reminded of the old Basset hound my foster liege, Mr. Bainbridge, had owned. Dilbert constantly forgot where he'd hidden his bones. Many a night Mr. Bainbridge had been out with a flashlight, Dilly lumbering alongside and tripping over his ears while his well-trained owner searched for the lost bone.

I pulled Westin back to the Abercrombie case. "Why is this still going on?" I asked.

The response was blunt. "Because our clients are crazy. The wife and kids are demanding the entire company."