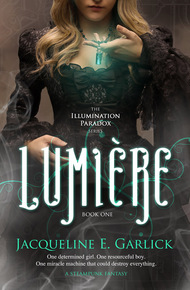 In 2005, well into her career as a teacher, Jacqueline was place in a portable teaching building filled with black toxic mould. What followed was nothing short of a nightmare, as she battled to restore her health, and convince a reluctant school board, to have the toxic building torn down. In the end, she was deemed a whistleblower and forced to leave the teaching profession. But as they say, when a door closes a window opens and Jacqueline decided to follow her life-long passion to write and publish books. In 2008, she was accepted into Ellen Hopkins famed Nevada Mentoring Program (a blind entry) and from there landed and top publishing agent. In 2013, Jacqueline published her first YA novel,

Jacqueline loves strong heroines, she despises whiny sidekicks and adores a good tale about a triumphant underdog. Don't you? Her edgy, rule-breaking, Tim Burton-esque style of writing has earned Jacqueline a nickname—Quentin Tarantino of YA. She's studied under best selling author's James Scott Bell, Disney Story Guru Christopher Vogler and the infamous, Donald Maass–author of Writing The Break Out Novel, every writer's bible. An excerpt from Lumière won her the prestigious 2012 Don Maass Break Out Novel Intensive Scholarship.

Jacqueline looks forward to reviews and comments from her readers, and welcomes requests for skype interviews, visits, guest blogs, appearances and pod casts! You can connect with Jacqueline here

One miracle machine that could destroy everything...

After an unexplained flash shatters her world, seventeen-year-old Eyelet Elsworth sets out to find the Illuminator, her father's prized invention. With it, she hopes to cure herself of her debilitating seizures before Professor Smrt—her father's arch nemesis—discovers her secret and locks her away in an asylum.

Pursued by Smrt, Eyelet locates the Illuminator only to see it whisked away. She follows the thief into the world of the unknown, compelled not only by her quest but by the allure of the stranger—Urlick Babbit—who harbors secrets of his own.

Together, they endure deadly Vapours and criminal-infested woods in pursuit of the same goal, only to discover the miracle machine they hoped would solve their problems may in fact be their biggest problem of all.

Jacqueline Garlick's debut novel is a rollicking good time, with adventure and romance in a gorgeous steampunk setting of deadly Vapors, lightning machines, and a girl risking everything on a quest to cure herself and uncover her father's legacy. I'm a fan of young adult literature to begin with—it has a pacing and freshness all its own—and Jacqueline does a masterful job of combining classic YA storytelling with an equally classic steampunk setting. Her descriptions are a delight, and her fast-paced narrative will pull you in. Enjoy the ride! – Susan Kaye Quinn

"Wait!" I shout, surging forward, shouldering my way through the crowd. I fight my way to the front and pound on the doors of the carriage. "Please!" I shout. "I need to speak to you!" But the stranger doesn't hear.

He brings his whip down hard over his horse's back and the carriage leaps forward, parting the angry crowd like soil in a furrowed field. "Wait!" I hoist my skirts and chase after the carriage. "Please!" I shout. "Please! Wait!"

A second crack of the whip and carriage moves faster. I race on, struggling to keep up to its side. If I lose sight of this carriage, I've lost everything. All hope of ever leading a normal life.

I can't let that happen.

He will not take my father's machine.

"Please, I beg you, stop the coach!" I lunge, throwing myself at the back of the coach, barely catching a toe on the edge of the running boards, embedding my nails into the carriage's seams. The carriage bursts forward through the streets of Gears, the city fast becoming a memory.

"Stop!" I plead as my boot slips from the running boards. I swing out to one side and dangle by one arm.

The stranger at the mount turns his head. "What are you doing?" he shouts. "Get off!"

I kick my way back up onto the platform.

"I said get off!" he shouts again.

"I won't!" I say, hoisting, myself up higher onto the cab.

My foot slips again and I sink beneath the rooftop, striking my chin hard on the way down. Grasping at the coach's seams, I desperately try to hold on, the toes of my boots burrowing twisted trenches in the dirt road below. My heart lodges in my throat as I lose my grip and swing out again to the opposite side.

His face appears over the top of the cab seconds later. His eyes are lit like flares.

I hang by the tips of my fingers, shocked, staring up at him. I don't know whether to cry or scream.

The face of a monster stares back at me, framed in a mop of curls darker than a raven's wing. His skin is ghostly white, marred by raised and purpled bruises. One, in the shape of an open-mouthed snake, devours his face—while the other, a purple hand, wrings his neck. He stares back at me through eyes as pink as a rabbit's. A single lock of strange pure white hair cascades down over his left eye. I've never seen anything like it. Not even in a book. It's as though he's escaped a freak show.

"For the love of God," he cusses, teetering on hand and knee, then disappears, only to reappear a second later, the reins clenched between his teeth. "Give me your hand!" He reaches for me.

My heart staggers in my chest. my eyes still shamefully glued to his startling face.

My fingers slowly begin to slip from the seam; my heart squirrels into my throat.

"You are in no position to be negotiating, now take my hand!" the stranger insists.

I drop my chin, surveying the speed of the terrain rolling beneath my feet. "Up," I say, turning my chin toward him.

"Rational choice," the stranger says. "On the count of three. Ready?"

The carriage hits a bump, tossing him haphazardly off to one side. "Confounded!" He struggles. The horse spooks, picking up speed, ripping the reins loose from the stranger's teeth.

My stomach sinks as his grip slips, then re-tightens around my knuckles, his legs floundering dangerously over the edge of the coach. He's sprawled on his back, kicking and flailing until at last he thrusts into a roll, flopping onto his belly again.

"Three!" he shouts, not yanking me up, but swinging me out and around the end of the carriage, kicking the side door open with his boot. Before I've had the chance to object he casts me deep inside the dark belly of the coach, slamming and locking the door behind me.