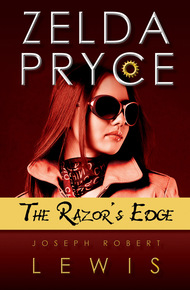 Zelda Pryce uses the arcane sciences to build beautiful machines, devices that defy explanation, make her invisible, and even let her fly. They also let her to break into homes, banks, and museums with ease. But she's no thief. She's a security expert. After successfully burgling the Smithsonian, Zelda is hired to test the alarms at the British Museum in London using her copper wings and ingenious cloak. And that's where everything goes wrong.

Caught in a trap between deadly arcanist criminals and the secret agents hunting them, Zelda teams up with a dashing English riskbender and a daring French alchemist to chase a dangerous thief from Notre Dame to Castle Frankenstein to the Taj Mahal. But if they can't catch the thief in time, every arcane device in the world could be destroyed, and thousands of innocent lives could be lost.

Welcome to a world where a Chekhov Gun is a revolver with a mind of its own and Occam's Razor is the most dangerous knife in history. At least it was, until a mad scientist made a sharper one.

Joseph Robert Lewis drags steampunk into the contemporary world, using behind-the-scenes Arcane Science to create fantastical things in a world of computers, the Smithsonian, and high-stakes security. I'm always a fan of strong female characters, so I love Zelda's intrigue and derring-do. Joseph's also after my heart with writing across multiple genres—everything from near-future SF to classic fantasy—and this contemporary steampunk has a little bit of everything. Zelda Pryce is just the first of the Zelda trilogy, which is now complete. For more steampunk from Joseph, you'll also want to check out his Drifting Isle Chronicles story (The Kaiser Affair), written in the same world as The Machine God and Black Mercury (both in this bundle). – Susan Kaye Quinn

"Hey Zel, has anyone else ever robbed the Smithsonian's Museum of Arcane Science before?"

Zelda Pryce stood alone outside the museum in the pool of light below a single streetlamp with her hands in the pockets of her old leather jacket. A cool breeze was blowing, and there was no one else on the dark street that she could see. Zelda reached up to fiddle with her earpiece and then she pushed her red cat's-eye glasses back up her nose. "Not in the last fifty years, I think. You're the one at the computer, you tell me."

"Oh, right." Roxanne's typing pattered in the background. "Hey, you're right. About sixty years ago some guy called Maxwell Park broke in and stole, get this, nineteen Curious Devices and four Murderous Implements from the museum. It took the FBI six months to catch him." She paused. "Oh."

Zelda cleared her throat. "Oh what?"

"It says they put him in Alcatraz. For life."

"That's not so bad," Zelda said as she started walking down the dark sidewalk in front of the museum. "I mean, they say no one ever escaped from Alcatraz, but that's hard to believe. And besides, it's closed now."

"Still, I hope you don't get caught."

"That makes two of us," Zelda said as she turned the corner and started down the side street away from the National Mall.

"So this is your first big job, right? Your first job that's not a house or vault?" Roxanne sounded nervous. "Are you sure you're ready for this?"

Zelda shrugged and smiled to herself. "We'll find out in a few minutes."

"Sorry," Roxanne said. "Mom was asking if I finished my homework. They're both really obsessing about school right now. Sometimes it feels like if I don't get into college, Mom and Dad will both melt into little puddles of disappointment and never recover."

"They survived when I dropped out of high school, didn't they?"

"Barely. But you were lucky, you didn't need college. I don't have the math scores to be a geometer."

"Geometrix. Respect the job title, missy, it's hot. And besides, I still had to go to school for it, just a different sort of school."

Roxanne laughed. "Oh, whatever. Admit it, you went to Hogwarts for math nerds."

"Daedalus, not Hogwarts." Zelda turned another corner and headed along the back side of the museum. The street here was even darker. There were no cars parked along the curb and no people in sight. In the distance both ahead and behind, she could see brightly lit intersections full of cars and people. But here, all was shadow and silence.

"So do you have all sorts of cool thief stuff on? Like Batgirl? Black body armor and a high-tech utility belt?"

Zelda shook her head. "Not exactly. Just my jacket, jeans, and some boots."

"And don't say magic. There's no such thing as magic. There're just the arcane sciences that don't conform to classical mechanics."

Zelda stopped. She was standing in front of the loading dock of the museum. "All right. Show time."

"Oh! Do you want me to hack into the museum's security system and make the cameras all play empty loops and give you control of the elevators?"

Zelda smiled. "That would be fantastic. What's the name of the elevator company?"

"Because you'd have to know whether it was Otis or Schindler to know what proprietary software is used to control the elevators, and then you'd have to steal a copy of the program for your computer before you could even try to access the museum system, and are you seeing where I'm going with this?"

Roxanne paused. "So… no hacking?"

"Nope." Zelda crossed the loading zone and climbed the steps to the back door. "Just a bunch of cheap tricks and a few arcane devices."

"But there are cameras and things, right? Won't they see you?" Roxanne asked.

"They'll see what I want them to see," Zelda said as she took a small black flashlight from her left pocket and shined it up at the camera pointed at the door. "Ever heard of the Diogenes Lantern? It makes people tell the truth. Well, I've got my own version. A Diogenes Flashlight. It makes people see what they expect to see. So if anyone looks at the security monitor, all they'll see is an empty loading dock."

"Yes." Zelda grinned. "Yes, it is." From her right pocket she took a large brass key with a round bow but no teeth on the blade. She made sure she still had the light pointed at the security camera and then she pressed the key against the lock of the steel door. "Here we go."

As she rolled her finger over the bow of the key, the blade began to click and tick softly. The tiny brass cubes of the blade unfolded one by one, some rolling down and some rolling forward as the key reshaped itself one tiny block at a time, working its way inside the lock and picking away at the tumblers on its own.

"I'm using a Theodore Key to pick the lock," Zelda said. "You don't need to whisper, you know. I'm the only person who can hear you."

"Oh. Right. So how did you get the key? Did you steal it? Did you win it gambling in Vegas? Did you have to make an animal sacrifice to your vengeful math god?"

"What? Where do you get this stuff? No, I built it. It was my thesis project right before I graduated from Daedalus."

"Oh. Well, there's this show where the geometers and alchemists have to pray to this science god to make their powers work. The alchemist guy is really cute, but he's all obsessed with this astrologer chick who's actually his half-sister, but he doesn't know that yet."

"Yeah right, whatever. So this key of yours can open any lock? That's got to be pretty rare. Is it worth a lot?"

"Not really. Half of my class made the exact same thing. Of course, there were only ten people in my class, so yeah, maybe it is a little rare." The lock clicked. Zelda turned the knob and the door swung open. She grinned and pocketed her key. "Got it. I'm going in."