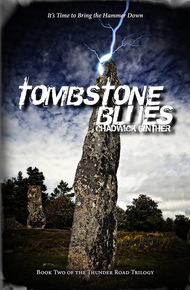 Chadwick Ginther is the Prix Aurora Award nominated author ofGraveyard Mindand theThunder Road Trilogy. His short fiction has appeared in many magazines and anthologies. He lives and writes in Winnipeg, Canada, spinning sagas set in the wild spaces of Canada's western wilderness where surely monsters must exist.

After beating back the might of Surtur, Ted Callan is getting used to his immortal powers. The man who once would stop at nothing to rid himself of his tattoos and their power might even be said to be enjoying his new-found abilities.

However, not everyone is happy the glory of Valhalla has risen from the ashes of Ragnarök. With every crash of Mjölnir, Thor, former god of thunder, rages in Niflheim, the land of the dead.

Now that Ted's woken the dead, there's going to be hell to pay.

I will admit to a weakness for Norse mythology. I've even written a couple of Norse myth stories myself (both of which are in Chimerascope, also in this bundle). So, when I had a chance with this bundle to include not just one, but two titles from Chadwick Ginther's excellent Thunder Road urban fantasy series, I jumped at it. Tombstone Blues is the second in the trilogy, and if you pick up the bonus titles in this bundle, you'll also get the third book, Too Far Gone. The Thunder Road trilogy is that rare beast—a series that starts out strong, then only gets stronger with each subsequent entry. Come on. Norse gods on the Canadian prairies—what's not to love? Plus, how could you resist a series that takes its titles from Springsteen, Dylan, and Neil Young tunes? – Douglas Smith

Down Here with the Rest of Us

Give it time, dear one," his mistress said. "He is too ignorant to know what else waits in the mist. He will call them again. And when he does… you will be free. You will have that which you desire—all that you desire. We shall have our revenge. Things will be as they were meant to be. The dead shall remain dead. Finally."

She reached up with a pale, delicate hand to stroke his ashen face. Her fingers cracked the crust of rime that buried his beard. Once, when he used to shrink from her touch, his beard had been as brilliant as a sunrise. Now, it was a dull, lifeless grey.

In time he had learned to love his place at her side. To crave even the briefest moment of intimacy and pleasure, things that were forever denied those who were dead. He knew, even offered his freedom, he would return to this place. To her.

Slowly, he clenched his gauntleted hand into a fist. The rusted metal of the iron glove creaked. He knew better than to touch her without her bidding. Many times since he had first been dragged into her realm, had the folly ofthatbeen made clear.

He used to worry about what his father would think, seeing him so, craving the touch of a once mortal enemy. It did not matter. Wherever his father had fallen, it was not this place, but somewhere not even wily Odin could escape. There was nowhere left for the gods now, nowhere but the mists of Niflheim, and within them, Hel, the Land of the Dead.

She was not addressing him this time, he knew, and that rankled. Instead she spoke to packed masses of the elderly and the sickly; the starved and cowardly dead. They sat at the tables of her hall with empty plates and goblets laid out before them.

"Would you feed upon their fear?" She could speak sweetly when she chose—when it suited her. "I believe you will. But you won't be alone. And you needn't walk."

Her grin touched only half of her face, where her lips were full, if cruel, and her skin alabaster. The other side, fire-blackened and scab-cracked, showed broken teeth and held no mirth. She held a hand out to him—her right. It was skeletal and black, like the ruin of her face. One might wonder: what could scar a goddess so? But she had been birthed with this countenance—half beauty, half nightmare. Even then, she'd straddled the worlds of life and death. Her true scar, he noted, had been left by her father.And how that trickster had scarred them all.Ignoring her injunction not to do so, he took her hand in his iron glove, crushing it in his grip.

She smiled at his impertinence. This time, her smile seemed to reach her entire face. A sight he alone was allowed to appreciate. Guiding him, she placed his hand over the hollow where a breast had never been. Curdled milk wept over rust. He felt no heartbeat. Even before Odin had banished her beneath Midgard, there had been no breath of life in her. She was Hel, the goddess of the dead, and both her hall and the realm it dwelt within shared her dread name.

Rising from her throne, Hel beckoned, and he fell in at her side. The dead shrank back from them, clearing a path down the center of her hall. Some reached out; their fingertips raw where their nails had once been. Those wretches, he brushed aside.

They were nothing. Cowards all.

Woven serpents were the brick and mortar of her palace. Undulating in excitement, the walls dripped venom, snapping at any but their mistress. Any who dared tread too close. In his lady's bursting home, they need not reach far.

Shuffling in step behind their mistress, the dead followed in a shambling, hungry gait. Only on Midgard could they be sated. Fear became their meat and mead, terror their bread and beer. Temporary appeasement would make the starvation they faced upon their return all the more bitter. A feast turned to ashes. Some managed to gorge themselves so deeply that they were able to remain above as shades, lingering on as reminders of her power. They had slipped through his father's fence in ones, or even threes, but not in the numbers his mistress required.

Those above no longer believed. Not inthisunderworld. And too few knew his lady's name to make the proper observances. But they would learn.

There was one that knew.

Thatmortal knew all too much—Odin's ravens served "friður now, as did the Norns. They told him much, and yet he had foolishly taken what did not belong to him. Even worse, he had stolen from her.

Sliding the bolt—ajötunn's severed finger—from the lock, she pushed open the gates to her realm. Icy, grey fog roiled just beyond the boundary between Hel and Niflheim. Floating on the cold fog, as if it was a gentle sea, a great longship was moored to the fence. A rotten wooden dock ran up to the ship.Naglfar. Pale, tattered sails draped limply from its mast, carved with curse upon curse. It didn't creak and groan as a wooden ship should; instead it squealed like bending iron and shuddered like a corpse expelling air.

Naglfarhad been crafted from the fingernails of the dead. The ship had only been sailed once before. When the trickster—the betrayer—Loki, had steered it to Asgard to face his former brethren at Ragnarök. How he hated Loki. Not even the end of the world could sate his loathing for that turncoat littlejötunn.

He stood there, seething. Once his anger would have set the clouds alight with fire, shaken the very foundations of Midgard. No longer. He could feel a storm brewing above in the world of mortals. This storm was not his doing. A low, animal growl rumbled in his throat. The storm washis. Perhaps the usurper already battled Hel's chosen. His mistress had sent her four mead maidens above, nightmares walked Midgard too. If the bitches robbed him of his prize, their torment would last an eternity. He would feed them to the mists of Niflheim in pieces. His hatred was the only warmth left to him in this cold, cold place.

"Go," she said to the dead. "BoardNaglfar." And they did.

They poured from Hel, the realm of the dead that took its name from its queen. He watched as they passed the broken, one-handed man who had once called him brother. A wretched thing—barely recognizable as man, let alone a god. When his brother looked up at him with empty sockets, strangely still full of hate, he was glad his mistress had made him take out those eyes.

You would despise what I have become, Tyr, could you see me. Blindness was the only gift I could give you.Some colour still lit the eyeless god's face, and despite his emaciated form he spat with impotent defiance. Once—an eternity ago—they had been bound together at the gates of Hel. Side by side, brother to brother.

Whooping cries that held no joy arose as the dead stumbled aboardNaglfar. But still they went, climbing aboard the ship, and waiting for the call.And when the thief calls to his "honoured" dead, we will be the ones to answer....

A shrill cry echoed past the army of the dead. In the deepest depths of Niflheim dwelt the hungry dragon Níðhöggur, and greater, darker spirits, that even Hel would not welcome into her hall. Those spirits meant nothing. They could do nothing to stop them once the way was opened.

When his mistress patted his brother fondly he felt a stab of jealousy. Tyr stared empty death at his captor. The fool didn't even know when he was being honoured.

Hel jerked his brother's head back to expose his neck. Her tongue, red and black as if it were stained by fresh and rotted blood both, lapped at Tyr's neck before taking a bite. Ripping a small gobbet of flesh free, she spat it into the mist before turning away.

Back to her servant.

Now her touch was his, she drew him close and whispered, her breath rank with Tyr's blood. "When the horn sounds, unfurl the sails. Midgard will once again belong to you."