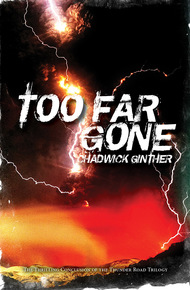 Chadwick Ginther is the Prix Aurora Award nominated author ofGraveyard Mindand theThunder Road Trilogy. His short fiction has appeared in many magazines and anthologies. He lives and writes in Winnipeg, Canada, spinning sagas set in the wild spaces of Canada's western wilderness where surely monsters must exist.

Too Far Gone by Chadwick Ginther

Ted Callan, war herald of the Nine Worlds, must build a cage from Surtur's bones, unearth the Bright Sword, and vanquish the fire giant once and for all.

But there's a catch.

Ted needs Surtur's bones to build the cage, to get the sword, to kill the giant. And Surtur is very attached to his bones.

Enlisting Manitoba's giants, dwarves, and elves to watch over Winnipeg, Ted takes advantage of a lull in Surtur's fires to hitch a ride back to Edmonton for his best friend's wedding and search for answers. While he's there he tries to mend fences with family and friends, dodges a legion of Surtur fanatics intent on setting the giant free, and learns he has three days left to live. Without Loki or the Norns to help, he won't solve the riddle and see another day.

It's the end of the world as Ted knows it—time to face his doom.

I will admit to a weakness for Norse mythology. I've even written a couple of Norse myth stories myself (both of which are in Chimerascope, also in this bundle). So, when I had a chance with this bundle to include not just one, but two titles from Chadwick Ginther's excellent Thunder Road urban fantasy series, I jumped at it. Tombstone Blues, the second in the trilogy, is part of the base bundle, but if you pick up the bonus titles in this bundle, you'll also get this title, Too Far Gone, the third and final book. The Thunder Road trilogy is that rare beast—a series that starts out strong, then only gets stronger with each subsequent entry. Come on. Norse gods on the Canadian prairies—what's not to love? Plus, how could you resist a series that takes its titles from Springsteen, Dylan, and Neil Young tunes? – Douglas Smith

Ted Callan ended the call. It was a hell of a message to leave on the machine after not talking to his parents in months. But the whole story would do more than eat up their answering machine's memory, it'd also put their lives at risk. He was coming home to Edmonton. That's all they needed to know.

He lit a cigarette, inhaling the mixture of butane and burning tobacco. Ted held it in, savouring the smoke, eyes closed. Expelled it in one long breath through his nose.

Whenever Ted saw fire, he heard the giant Surtur's laugh, "Lock, lock, lock." He still dreamed he was burning alive. If he turned northwest, Ted could almost hear the crackle of flames.

The wind scattered grit over the parking lot of the greasy spoon. Its egg-shaped mascot grinned down from the sign with its empty grin, giving Ted a thumbs-up. Hardly the greatest endorsement of his plan. But the franchise had begun in Alberta, and that seemed a good omen.

Though there was more on Ted's plate than greasy eggs and bacon. Thedvergar, theálfar, thejötnar, the Norns; his friends and his enemies. They'd all settled their hash at the "Council of Humptys," and he felt he could leave Winnipeg in their hands. They'd promised to come when he called and in return he'd given each a token. Vera had scoured the Gimli beaches to find all those lucky stones. Each with a natural hole through its surface that Ted had run a cord through. On each stone he'd carvedRaidho, a rune in the shape of a stylized "R." A rune of travel. If shit hit the fan, he'd have backup. Ifthey had his back.

They'd agreed to his treaty. But Ted had also had most of their blood on his knuckles before.

There was someone else, someone Ted had half-expected to crash the council, whom he'd bought some insurance against. He didn't want to think of the fucker's name.Speak of the devil, and all that.

Ted's insurance was two thin golden chains around his wrists. Chains that were shards of something once used to terrify and bind him. Now they were a gift from Andvari's dwarves and Youngnir's giants. The dwarves had taught him Gleipnir's song. He sang to the chain—the tune reminded him of The Flys' "Got You Where I Want You"—and the chains separated, slithering around his forearms, and then rejoined, looking as if they'd never been broken. Better to have insurance, hoping you never need it, than not having it when you do.

He'd have to suss shit out quick and get out quicker. Pulling off this expedition into the lands of the enemy would take every bit of deception he'd ever learned from Loki.

Never thought I'd stop thinking of Edmonton as home.

Things change. Kick the asses of a few valkyries and a dragon, throw in the god of thunder and the goddess of death, and word gets around. Winnipeg wasn't a big city, and it hadn't taken long. Winnipeg became more—if not completely—normal. But after Hel's invasion, the city would never be the same. Ted's presence brought enough danger all on its own. Maybe today would be the beginning of the end of that.IfTed could pull it off.