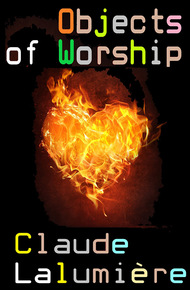 Claude Lalumièreisthe author of more than 100 stories and five books, includingVenera Dreams: A Weird Entertainment, which was a selection of the Great Books Marquee at Word on the Street Toronto 2017. Originally from Montreal, he now lives in Ottawa and is often spotted touring Spain and Italy, where his fiction is frequently translated. His work has also been translated into French, Polish, Russian, Serbian, Hungarian, and Romanian.

Objects of Worship by Claude Lalumière

Capricious gods rule a world of women. Zombies breed human cattle. The son of a superhero must decide between his heritage and his religion. A young man hunts a sea monster from his childhood. In a primordial era, an infirm boy yearns to be a winged warrior. Young lovers worship a primordial spider god. The apocalyptic rebirth of the god of the elephants. The dead telephone the living. An ancient sorcerer lives on through his preserved eyes. Monstrous chimeras roam through a devastated future Earth. A retired fisherman caught in the middle of a conflict between gods and superheroes. Teenagers struggle to survive a surreal ice age…

I've known Claude Lalumière since shortly after I started writing in the late 90's, and am proud to call this talented writer a friend. We first met at a Toronto café during one of his visits from Montreal. I'd recently read his short story "The Ethical Treatment of Meat" (which is included in Objects of Worship), and had been so impressed that I was a little intimidated at first. I remember being struck by his intensity, an intensity that I realized came from his passion for writing and for the short story in particular. Objects of Worship was one of the first titles published by CZP, a key reason why I published my collection, Chimerascope, with them as well. Several tales in Objects of Worship are taught in writing courses. Here's your chance to learn why. – Douglas Smith

Noise awakens Rose. It's still dark. She groans, knowing how hard it can be for her to get back to sleep when she's roused in the middle of the night. She looks up; the altar is still empty. The god usually watches over them at night.

Worried, Rose gets out of bed and grabs her robe. She follows the source of the sound.

Through the kitchen window she looks at the large inner courtyard shared by five neighbouring houses. The gods are gathered. The gods are singing.

A few other neighbours are sitting on their balconies, watching the gods.

All thirteen resident gods are there – one for every household with access to the courtyard. One of the gods lies in the middle of a circle formed by the other twelve. One by one, each god leaves the circle to rub itself against the god in the centre. They go around many times. With each round the singing intensifies, until it reaches a thunderous crescendo and all the gods swarm toward the centre. Abruptly the singing stops, and the mass of congregated gods pulses with light.

Rose returns to bed, troubled and confused. Before moving in with Sara, Rose had never seen gods together, and she is still unfamiliar with their social habits. Unsettled by them, even. It's a city thing, with so many households close together. Rose is still a country girl at heart, despite having lived here for three years.

Eventually, just as dawn breaks, the god returns to its altar. Rose has not slept the whole time.

Rose whispers a prayer to the god as it settles in. The god glows. Then the god joins Rose in bed, slips under the covers. It rubs itself against Rose's toes, her soles, her legs, her stomach, her breasts ... It shares its warmth with Rose. Rose's heart melts with love for the god. The god presses itself between her legs. She spreads her legs. The god accepts the tribute of her moistness. And then the god gives itself to Rose.