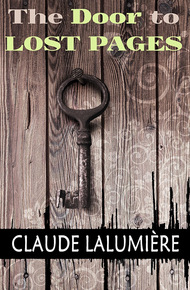 Claude Lalumièreisthe author of more than 100 stories and five books, includingVenera Dreams: A Weird Entertainment, which was a selection of the Great Books Marquee at Word on the Street Toronto 2017. Originally from Montreal, he now lives in Ottawa and is often spotted touring Spain and Italy, where his fiction is frequently translated. His work has also been translated into French, Polish, Russian, Serbian, Hungarian, and Romanian.

The Door to Lost Pages by Claude Lalumière

Step through the door to Lost Pages and escape a life you never wanted...

On her tenth birthday, Aydee runs away from home and from her neglectful parents. At first, surviving alone on the streets is harsh, but a series of frightening, bewildering encounters with strange primordial creatures leads her to a bookshop called Lost Pages, where she steps into a fantastic, sometimes dangerous, but exciting life. Aydee grows up at the reality-hopping Lost Pages, which seems to attract a clientele that is both eccentric and desperate. She is repeatedly drawn into an eternal war between enigmatic gods and monsters, until the day she is confronted by her worst nightmare: herself.

I've known Claude Lalumière since shortly after I started writing in the late 90's, and am proud to call this talented writer a friend. We first met at some downtown Toronto café during one of his visits from Montreal. I'd recently read his short story "The Ethical Treatment of Meat" (which is included in Objects of Worship, part of this bundle), and had been so impressed that I was a little intimidated. I remember being struck by his intensity, an intensity that I realized came from his passion for writing and for the short story in particular. Claude works mostly in the short form, both as a writer and respected editor. Which makes The Door to Lost Pages a special treat. Yes, it's a short story collection, but these stories are all linked by a wonderful overarching tale, set in, appropriately enough, a bookstore. But a very special bookstore, fitting for a very special writer. – Douglas Smith

It's obvious to Sandra that Aydee feels like she doesn't belong here. Aydee, wrapped in layers of tattered and dirty clothes, wearing a tuque that tries hard to hide her face, fidgets nervously while she recounts the latest adventures of her "other self." Sandra begins to regret bringing her inside.

It's only midmorning, and The Small Easy isn't very busy yet. Sandra – petite, extravagantly tattooed, fashionably underdressed – is sitting with Aydee at a table that looks out onto the street. Their muffins and coffee arrive. Sandra thinks the waitress is kind of cute: plump, friendly, frizzy-haired, sporting a nose ring.

Sandra expects Aydee to resume her story, but Aydee's attention has wandered. Russet – a brown mutt nearly as tall as a Great Dane but with the robust musculature of a Rottweiler – stares at her through the glass, one paw held up against the window. She matches the dog's gesture.

There's a slight drizzle today, and the year's first hint of autumn chills the air, so Sandra had insisted that they come inside. Aydee reluctantly agreed after Sandra suggested they could sit by the window to keep an eye on Russet. Aydee dislikes leaving him alone outside; even more so recently. Dogs are being found stabbed, murdered, and the city isn't doing anything about it.

Aydee sips her coffee silently, while Sandra thinks about today's story – some intricate yarn about Aydee's alter ego helping a group of time-lost prehistoric proto-humans find their deity, the Green Blue and Brown God, a primordial "god of life" who's among the several outlandish recurring characters in Aydee's fabrications. Sandra wants to prompt her to continue, but she hesitates. Poor crazy Aydee and her crazy stories, thinks Sandra, yet she's nevertheless fascinated by Aydee's imagination. Those weird stories of ancient tomes, powerful gods, and outrageous monsters excite Sandra – they sometimes seem more real to Sandra than her own dead-end life. She feels guilty about indulging, maybe even encouraging, Aydee in these delusions, but what else is she to do – ignore her?

As Aydee tells it, on the evening of her tenth birthday, she, hopelessly lonely and with nowhere to go, walked away from her abusive parents. She's been living on the street ever since. She believes that when she fell asleep in an alley that night, she was split into two people. The other Aydee had awoken to find herself rescued by a giant lioness, "the god of lost children," only to be flung in the middle of an eternal conflict between the supposedly benevolent Green Blue and Brown God and Yamesh-Lot, a violent, amorphous god of darkness, which led her to discover a strange bookshop called Lost Pages. She ended up being more or less adopted by the shopkeeper, living with him and his many dogs, and apprenticing at the shop. Lost Pages is at the centre of Aydee's fantasy life, and Sandra's been seduced by the allure of this surreal bookshop: its inventory of arcane books that can't be found anywhere else; its knack for attracting – and helping – people (and other creatures) who are desperately lost.

Aydee breaks her muffin in two, slipping half of it into a coat pocket. "Gotta keep some for Russet," Aydee says, responding to Sandra's inquisitive stare, and then falls abruptly silent again.

Sandra feels selfish – she's already wolfed down her own muffin in three hurried mouthfuls – and wishes she could afford more food, but she barely has enough money to leave a tip. She should get a better-paying job, but together she and the boys make enough to get by; being a twenty-year-old high-school dropout with no special skills limits her options. Cleaning up the tattoo shop isn't exactly stimulating, but at least, in addition to the under-the-table slave wage, she gets her tattoos done free.

Recently she's been thinking of moving out on her own. For that she'd need more money, though. Tom's mood swings are getting worse all the time; he's too focused on scoring drugs every night, and she's fed up with that scene. And, as sweet as Kevin can be to her, because of his paranoia about "strangers" they don't make other friends. It's the three of them against the world – only she doesn't believe that anymore.

She's never told them about Aydee; they would neither understand nor approve.

Some days, Aydee is cheerful, wrapped up in the magical life of her alter ego or simply enjoying Russet's company, but today Sandra can see that Aydee is having a rough time. She's distracted and nervous, and not just about leaving Russet outside.

Aydee starts crying. At first Sandra is too shocked to react, but then she reaches out and squeezes Aydee's wrist.

"Why did I wake up in that filthy alley? There's no Lost Pages. Not for me. I wish that other Aydee would come and rescue me. She's a hero, she really is. She helps people who think they have no place in the world find where they belong. I wish she'd be my hero. She runs Lost Pages now. She's strong and beautiful, with her hair braided and beaded and her skin as smooth as a baby's. Not like me." Aydee disentangles her wrist from Sandra's fingers and wipes her runny nose. "But we're still connected! I know everything that happens to her! She has to know about me! Why doesn't she come and find me, so I can be safe, too? Me and Russet. She has to find us some day. She has to!" Aydee glances outside at Russet, who is steadfastly focused on her. "It's getting cold again. I don't know if I can take another winter."

Not for the first time, Sandra wonders about Aydee's age. When she noticed her last February, begging on the street with her dog on the coldest day of the year, Sandra had assumed from her weathered face and scraggly voice that she must be around fifty. She's so frail and withered, but there's something about her features – the delicately small ears and nose, for example – that makes Sandra think Aydee might be closer to thirty, maybe even younger. Whenever Sandra asks, Aydee always answers, "Oh, I don't know. I've lost track."