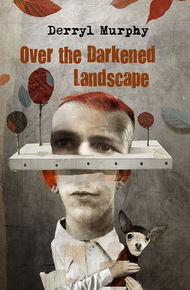 Derryl Murphy's ChiZine Publications novel Napier's Bones, a mathematical dark fantasy, was a nominee for the Aurora Award. Some of his short fiction was compiled in the two collections included here, and he also co-wrote, with William Shunn, the novella Cast a Cold Eye. His new novel has just been handed off to his agent, where it is currently cooling its heels. Derryl lives in Saskatoon with his wife and sometimes his youngest son, who is supposed to be away studying at university but this whole pandemic thing might have messed that up.

Over the Darkened Landscape by Derryl Murphy

Over the Darkened Landscape - This collection of science fiction and fantasy fiction includes four of Murphy's "Magic Canada" stories, in which he takes actual or apocryphal events from Canada's past and gives them a bit of a fantastical spin. Cavemen and mammoths, a Prime Minister in his younger days and his talking dog, magic during the Riel Rebellion, and children who (usually) never grow old are all a part of what's inside.

I've known Derryl Murphy since shortly after I started writing in the late 90's, and am proud to call this talented writer a friend. I read his story "Wasps at the Speed of Sound" (the same-titled collection is also part of this bundle) almost two decades ago when we both had stories in the now defunct magazine Oceans of the Mind. Two decades—and I still remember that story. That is the kind of writer that Derryl is. The stories in Over the Darkened Landscape, which include an award nominee, span Derryl's short fiction career, from fantasy to science fiction, all written in his tight clean prose. This collection also collects for the first time all four of his "Magic Canada" stories, which look at key events in Canada's past through a fantastical lens. Enjoy! – Douglas Smith

Through the frozen streets of Dawson, Samuel runs from two cavemen.

They're well-dressed, these cavemen, one of them even in tie and tails. But their hair is long and scraggly, and Samuel would almost swear that their brows slightly protrude; aside from the already out-of-place fancy dress, a neanderthalian version of your typical northerner, not at all worried about the niceties of polite society, here at the ass end of the nineteenth century.

Except that most northerners, even trappers and prospectors who spend almost all of their time alone in the bush, can speak in more than grunts and gibberish, and Samuel doubts even the most ruthless of them would be so keen to smash in his skull.

It is late in the evening, and the temperature is most certainly below minus twenty. Samuel rounds a corner, skidding on packed snow and patches of ice, but he retains his balance. Down an alley to his right he catches a glimpse of two more, one a cavewoman, resplendent in a glittering evening gown, which is up around her waist as the male apparently has his way with her from behind. They both yell inarticulately as Samuel passes them by but do not break off their primeval assignation.

Another yell tells him the first two cavemen are back on his trail.

He rounds another corner, and the door to a dilapidated cabin swings open. From the blackness within a voice quietly calls to him. "Quickly! Inside!"

Samuel does as he is bid, and the door closes behind him. It is darker inside than out; he can see nothing, but outside, over the pounding of the blood in his temples, he hears the footsteps of the two cavemen going past and strains to listen as they fade into the distance.

He hears his rescuer stand and shuffle over to the window. In the sliver of light allowed in from outside, he can see now who it is. "How'd you get here?" he asks.

She puts a finger to her lips and holds up her other hand, and pretty soon two more sets of footsteps go running by, accompanied by words in a guttural, prehistoric tongue. When they're gone she sits on the floor beside him. "They saw me when they first arrived, but I don't think they're after me. Still, I came here to stay safe until they're gone."

Samuel frowns. "How do you get to be so lucky? The moment they saw me I could see they wanted to get all over me like sled dogs on a bone."

She takes his hand and feels at the makeshift bandage he still has wrapped there. "I think you know."