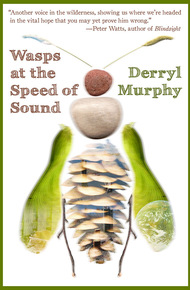 Derryl Murphy's ChiZine Publications novel Napier's Bones, a mathematical dark fantasy, was a nominee for the Aurora Award. Some of his short fiction was compiled in the two collections included here, and he also co-wrote, with William Shunn, the novella Cast a Cold Eye. His new novel has just been handed off to his agent, where it is currently cooling its heels. Derryl lives in Saskatoon with his wife and sometimes his youngest son, who is supposed to be away studying at university but this whole pandemic thing might have messed that up.

Wasps at the Speed of Sound by Derryl Murphy

Wasps at the Speed of Sound - Here are eleven short stories about the impact we have on our environment, and the impact our environment has on us. Species extinction, alien insurrection, the physical destruction of the Earth and more lead the way in this collection of EcoSF.

I've known Derryl Murphy since shortly after I started writing in the late 90's, and am proud to call this talented writer a friend. I read the title story of this powerful collection almost two decades ago when we both had stories in the now defunct magazine Oceans of the Mind. Two decades—and I still remember that story. That is the kind of writer that Derryl is. The stories in Wasps at the Speed of Sound are, in this era of human-driven climate change, even more relevant today than when first written. They show us, to quote Peter Watts in the introduction, "eleven ways for the planet to die." Watts describes Murphy as "another voice in the wilderness, showing us where we're headed." Here's your chance to read these wonderfully crafted and thought-provoking tales. – Douglas Smith

They were scraping through the bush in the old transport: Jimmy and Kev in the back row of seats, irritably sniping at each other as small boys are wont to do; Jennie in the seat beside Laura, curled up and trying to sleep through each bone-and-kidney-jarring thud; and Summer in the front beside Cam, giving directions with waves of a slim, fluttery hand, brittle hairs falling from his body and littering the floor, forgetting every once in a while to speak in his halting English and reverting to the barking and coughing sounds that passed for the primary form of speech with his people. In the back sat three suitcases and five pillows, all they'd had time to pack before the fighting had descended on their neighborhood.

Laura was still angry with Cam. Three days ago, with no warning, no discussion, he'd come home with the used transport, a great, hulking monstrosity with six immense wheels, four long bench seats, and seemingly enough room in the back for their car, which he'd sold, showing her the cash in his briefcase and giving her that "don't worry your pretty little head about it" grin. "This is better for camping," he told her. "We don't need the car anymore."

"But why didn't you leave the money in the system?" she'd pressed, not understanding.

This time he gave her his "discussion over" look. It did nothing to soothe her anger, but at the time she hadn't been in the mood to go on.

Now, the trees and bushes on either side lost their narrow leaves as the transport brushed against them, blue-green pods every bit as brittle as the hairs on Summer's body. Their juices smeared against the windows and attracted hordes of tiny white insects, which in turn attracted larger insects and strange birds, all fluttering and thumping against the windows in the search for food.

Eventually they came out of the bush and joined up with a mud track that Summer insisted was a local road. The jolts Laura's kidneys and back suffered were every bit as severe as when they'd been driving through the bush, but she had no choice but to trust what Summer told them, even though his people were killing her people, back in the city.

After another hour they entered a large clearing, several dozen small mud and thatch huts huddled on the poor ground, smoke rising from holes in the roofs of almost all of them, and children — she'd never seen Mapaekie children before, but what else could they be? — running alongside the transport, coughing and barking and chittering, the last sound recognizable to her as a Mapaekie laugh. The boys sat up now, pressed noses to their windows and watched the native children; Jennie sat up and rubbed her eyes and began to cry, tired and frightened and unsure where she was. Cam made as if to scold her but saw the look on Laura's face, turned back to drive into the small copse of trees and bushes Summer pointed at. They parked there, Jennie finally done crying, now also looking out the windows, dread and anticipation both showing on her face. With a press of a button Cam opened all of their doors and the boys spilled out, chattering away to the Mapaekie youngsters, who chattered right back in their own language, neither understanding the other but all seeming to find a universal language of childhood, here on a planet many years from Earth.

Jennie hung back, pressed against Laura for comfort and familiarity, but after hours of her daughter sleeping on her Laura was irritated with this latest encroachment on what little space she had left, and shoved her away so that she could get the bags. This set Jennie to crying again, but instead of Cam it was Summer who was there, down on all four knees and crooning to her as he stroked her hair, leaving hundreds of his own short wirelike hairs on her head. She settled down for him, which angered Laura even more, and then Summer called over a shy-looking youngster holding a rough figure of clay, pointed to Jennie's chin and said some words. The Mapaekie child reached out and tentatively took her hand, and just like that they were off after the boys.

Laura felt the pit of her stomach drop, but before she could say anything Summer stood and looked her in the eye. She didn't know if she should feel fear or comfort; but Cam, all smiles, put a hand on her shoulder, and for the moment everything seemed fine. Summer grabbed two of the bags, Cam the other and his pillow, Laura the rest of the pillows, and they followed Summer towards a small hut at the periphery of the little village, adult Mapaekie stopping what they were doing and shielding their eyes against the sun as they watched the humans trudge past.

"You'll safe here," said Summer. He put down the cases and waved his arms in that funny way he had, extra elbows making his arms all waggly, and Laura turned around in a circle to take it all in: dirt floor; woven rug that had perhaps once been colorful; fire pit in the middle with a tripod of sticks standing over it; four cinder blocks, pilfered from the city no doubt, holding up boards to create two short shelves; and two clay pots and a battered steel bowl that she recognized as something she had tossed in the cycler back home two years ago. She turned to glare at Summer but he avoided her gaze, instead nodded and said, "Safe. Childs to play safe with our childs. My home," he tapped his chest and pointed out the open door, "is there, close." He stepped outside, still shedding madly, likely nervous as all hell, daring to bring them here. "I'll supper you tonight." He left.

Cam dropped his bag and set the pillow on top of it, then wiped the sweat from his eyes. "Christ, it's hot here. Shut the transport off and come out into the real world, enough to melt you."

Laura felt at the growing sweat stains under her pits and nodded. She'd been so caught up in everything she hadn't paid more than cursory attention to it, but it was hot here, hotter than she remembered the city ever being. "How do we sleep?" she finally asked.

Cam shrugged, looking around. "Didn't think to bring anything other than a few light sheets and these pillows, did we?"

"It wasn't like we were packing for a trip to the beach," Laura replied. She sounded bitchy, could tell by Cam's wince that he took it personally, but was too hot and tired to care right now.

"We'll pull the seats from the transport," he said. "They pop loose. Should be enough to keep us up and away from whatever the hell crawls around on the ground at night."

He grinned as she shuddered, then loped off to start fetching their new makeshift beds. Laura sat on the dirt floor with her back against the wall and put her hands over her eyes, choking back sobs.