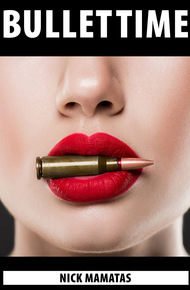 Nick Mamatas is the author of several novels, including Move Under Ground, I Am Providence, and the forthcoming The Second Shooter. His short fiction has appeared in Best American Mystery Stories, Year's Best Science Fiction & Fantasy, Tor.com, and dozens of other venues. Nick is also an anthologist: his books include the award-winning Haunted Legends, award nominees The Future is Japanese and Hanzai Japan, and the forthcoming Wonder & Glory Forever.

David Holbrook is a scrawny kid, the victim of bullies, and the neglected son of insane parents. David Holbrook is the Kallis Episkopos, a vicious murderer turned imprisoned leader of a death cult dedicated to Eris, the Hellenic goddess of discord. David Holbrook never killed anyone, and lives a lonely and luckless existence with his aging mother in a tumbledown New Jersey town. Caught between finger and trigger, David is given three chances to decide his fate as he is compelled to live and relive all his potential existences, guided only by the dark wisdom found in a bottle of cough syrup. From the author of the instant cult classic Move Under Ground comes Bullettime, a fantasy of blood, lust, destiny, school shootings, and the chance to change your future.

I haven't had the opportunity to ever meet Nick Mamatas, but have known his name and his work ever since his cult classic work, Move Under Ground, came out in 2004. Complex and ambitious, Bullettime may also be, despite its non-linear and unusual structure, Mamatas' most accessible novel. It is certainly one of his most relevant, as high school mass shootings continue to plague headlines year after year. I was thrilled to be able to include Bullettime in the bundle. – Douglas Smith

This is not a story about how to do what I did and survive, and be free. I'm not free. In many of the millions of futures that tumbled forth, that are still rolling and twisting ahead out to the ends of the world since that day, I'm not even alive. She is though, at the end of every strand of fate, tugging on the fabric of life and laughing.

I just happen to think she's laughing with me, not at me. I hope so. I love her. This is the story of my love for her. It's a story that I like to tell from the bottom of a little plastic cup.

Tussin. If they only wanted you to take two tablespoons, why would a bottle of the stuff come with a plastic cup that can hold eight? Half a bottle before school, but David Holbrook still uses the little cup instead of just taking a swig out of the bottle. One, ugh, two, blech, three. Okay, then a fourth. Then a big handful of Coricidin HBP. It wouldn't look like Skittles if they weren't supposed to be eaten by the handful. To the mirror, Mr. Holbrook, he thinks. David liked thinking of himself as Mr. Holbrook. He wished he attended an uptight boarding school like on TV, where the teachers called the students Mr. Thomason and Mr. Smythe and the older boys who tortured the freshmen with wristlocks and spittle and the Greek alphabet gave everyone clever nicknames: Foggy, Banger, Lilliput.

David's actual nickname at school is "Hey Fag." When he thinks of himself in casual terms, he's Dave.

To the mirror, Mr. Holbrook.

Dave looks into the mirror. He can't take himself all in at once, not with the drugs still gurgling in his stomach, and not yet completely bathing his brain, but he can look. Two eyes, brown. Red creases like a brand, where his eyeglasses rest on his nose. Hair, too much of it, piled on his head—not long like a dirtbag kid—just thick and wide and untamable. A shoulder, fertile with acne. e crease of a collarbone, hard like the end of a sentence. Streaks of ribs under skin where his pecs should be. That's enough for now.

Dave flows down the steps, past the empty living room and into the kitchen. His mother sits at the table, somewhat preoccupied by the buzz and flicker of the little black and white TV. "Dave," she says, "Dave. Good morning."

She sighs chemically. "Do you want breakfast? I can make you some," to the TV—the weather will be fine, the traffic is fine—"breakfast. You don't want any breakfast?" Dave's stomach gurgles, all grape and trouble. "It's okay."

"Yeah, it's okay." She rises and tries a half smile. "I'm a little tired, out of sorts, you know. I think I'll get some rest. I'll cook you breakfast later." She shuffles past Dave; the few silvery hairs amidst the L'Oréal Cherry Cordial catch the light, and he stares. Mom turns back to him and offers a languid half smile. "Have fun," she says, "at school. Be good. Be careful. Okay? Okay."

Out the door and onto the street. The sun is like butter, smeared everywhere. Dave shakes off the heat from his stomach and the back of his neck, sniffs a bit of tingly grape in his sinuses, and . . . to school, Mr. Holbrook. He turns at the end of the block, a right, then a left, then three blocks and a left, onto Pavonia Avenue, where the houses fall away and dusty storefronts yawn, selling faded crap from twenty years before. Sewing machines, American flags faded to pink and baby blue, Coca-Cola cans celebrating June's big movie—it's September. Dave is, I was, fifteen, and there was music in the air. Phat beats from passing cars, the bass so heavy that thumps turned to fuzz. Salsa and the haunting wail of Indian music too; the little restaurants on the street—all of them with signs reading No High School Students Before Lunch Thank You (with various creative misspellings and random apostrophes added)—liked to compete with tinny PA systems.

I see him now, walking down the slope of Pavonia Avenue toward the grey slab of high school, his shoulders sinking, his smile wilting. The music is swallowed by the bellows and shrieks of the kids outside. Like the restaurants, they compete on ethnic grounds: clumps of black kids have the curb, the Latinos have taken the steps, a small brace of whites mill about across the street, waiting till the last possible moment before crossing the street to Palisade Avenue and Hamilton High School. Dave isn't sure if his feet feel heavy and oh so long, as if he's wearing invisible clown shoes, due to his morning ritual, or just because school is nothing but a horrible prison. Devil's Island. Island not included.