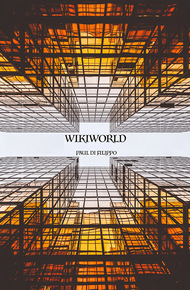 1.Paul Di Filippo sold his first story in 1977, and since then has somehow become the instigator of over forty books: novels, short-story collections, and assemblages of humorous essays. He also has written well over a million words of uncollected book reviews. He lives in Providence, Rhode Island, with his partner Deborah Newton and a cocker spaniel named Moxie.

WIKIWORLD is a collection of short stories that originally appeared in the period 2007 to 2010. They represent the varied output of a writer who tries seldom to repeat himself, and consequently they span a variety of genres and modes. There is the madcap surrealism of "Cockroach Love," co-written with the well-known Aussie author Damien Broderick. There is posthuman biopunk in "Waves and Smart Magma." There is day-after-tomorrow climate-change adventure in "Life in the Anthropocene." And there is pure steampunk in "Professor Fluvius's Palace of Many Waters." And that's just for starters!

I have not had the pleasure of making Paul Di Filippo's acquaintance personally, but I certainly, like most fans of the genre, know his name. So, I was thrilled when I had a chance to include a Di Filippo title, Wikiworld, in the bundle. Paul has a stunningly impressive body of work, with a dozen novels and hundreds of published short fiction. I know Paul's work primarily through his short stories, so it's a special treat to be able to offer one of his best and most recent collections in this bundle, which includes the title story. If you enjoy the work of Rudy Rucker, Bruce Sterling, Neal Stephenson, William Gibson, Charles Stross, Paulo Bacigalupi, or Cory Doctorow, you need to read Di Filippo. And now you can! – Douglas Smith

Russ Reynolds, that's me. You probably remember my name from when I ran the country for three days. Wasn't that a wild time? I'm sorry I started a trade war with several countries around the globe. I bet you're all grateful things didn't ramp up to the shooting stage. I know I am. And the UWA came out ahead in the end, right? No harm, no foul. Thanks for being so understanding and forgiving. I assure you that my motives throughout the whole affair, although somewhat selfish, were not ignoble.

And now that things have quieted down, I figured people would be calm enough to want to listen to the whole story behind those frighteningly exciting events.

So here it is.

It all started, really, the day when several wikis where I had simoleans banked got together to build me a house. Not only did I meet my best friend Foolty Fontal that day, but I also hooked up with Cherimoya Espiritu. It's hard now, a few years later, to say which one of those outrageous personages gave me the wildest ride. But it's certain that without their aiding and abetting, plotting and encouraging, I would never have become the jimmywhale of the UWA, and done what I did.

The site for my new house was a tiny island about half an acre in extent. This dry land represented all that was left of what used to be Hyannis, Massachusetts, since Cape Cod became an archipelago. Even now, during big storms, the island was frequently overwashed, so I had picked up the title to it for a song, when I got tired of living on my boat, the Gogo Goggins.

Of course the value of coastal land everywhere had plunged steadily in the three decades since the destruction of New Orleans. People just got tired of seeing their homes and business destroyed on a regular basis by super-storms and rising sea levels. Suddenly Nebraska and Montana and the Dakotas looked like beckoning havens of safety, especially with their ameliorated climates, and the population decline experienced for a century by the Great Plains states reversed itself dramatically, lofting the region into a new cultural hotzone. I had heard lately that Fargo had spawned yet another musical movement, something called "cornhüsker dü," although I hadn't yet listened to any samples of it off the ubik.

Anyway, this little islet would serve me well, I figured, as both home and base for my job—assuming I could erect a good solid comfortable structure here. Realizing that such a task was beyond my own capabilities, I called in my wikis.

The Dark Galactics. The PEP Boys. The Chindogurus. Mother Hitton's Littul Kittons. The Bishojos. The Glamazons. The Provincetown Pickers. And several more. All of them owed me simoleans for the usual—goods received, or time and expertise invested—and now they'd be eager to balance the accounts.

The day construction was scheduled to start, I anchored the Gogo Goggins on the western side of my island, facing the mainland. The June air was warm on my bare arms, and freighted with delicious salt scents. Gulls swooped low over my boat, expecting the usual handouts. The sun was a golden English muffin in the sky. (Maybe I should have had some breakfast, but I had been too excited to prepare any that morning.) Visibility was great. I could see drowned church spires and dead cell-phone towers closer to the shore. Through this slalom a small fleet of variegated ships sailed, converging on my island.

The shadow of one of the high unmanned aerostats that maintained the ubik passed over me, the same moment I used that medium to call up IDs on the fleet. In my vision, translucent tags overlaid each ship, labeling their owners, crew and contents. I was able to call up realtime magnified images of the ships as well, shot from the aerostats and tiny random entomopter cams. I saw every kind of vessel imaginable: sleek catamarans, old lobster boats, inflatables, decommissioned Coast Guard cutters— And all of them carrying my friends—some of whom I had met face to face, some of whom I hadn't—coming to help build my house.

I hopped out of my boat onto dry land. My island was covered with salt-tolerant scrub plants and the occasional beach rose. No trees to clear. Construction could begin immediately.

As I awaited my friends, I got several prompts displayed across my left eye, notifying me of four or five immediate ubik developments in areas of interest to me. I had the threshold of my attention-filter set fairly high, so I knew I should attend to whatever had made it over that hurdle. For speed's sake, I kept the messages text-only, suppressing the full audiovideo presentations.

The first development concerned an adjustment to the local property-tax rates. "Glamorous Glynnis" had just amended the current rate structure to penalize any residence over 15,000 square feet that failed to feed power back to the grid. Sixty-five other people had endorsed the change. I added my own vote to theirs, and tacked on a clause to exempt group homes.

Next came a modification to the rules of the non-virtual marketplace back on the mainland, where I sold many of my salvaged goods in person. "Jinglehorse" wanted to extend the hours of operation on holidays. Competitively speaking, I'd feel compelled to be there if the booths were open extra. And since I liked my downtime, I voted no.

Items three and four involved decriminalizing a newly designed recreational drug named "arp," and increasing our region's fresh water exports. I didn't know enough about arp, so I got a search going for documents on the drug. I'd try to go through them tonight, and vote tomorrow. And even though I felt bad for the drought-sufferers down South, I didn't want to encourage continued habitation in a zone plainly unsuited for its current population densities, so I voted no.

The last item concerned a Wikitustional Amendment. National stuff. This new clause had been in play for six months now without getting at least provisionally locked down, approaching a record length of revision time. The Amendment mandated regular wiki participation as a prerequisite for full enfranchisement in the UWA. "Uncle Sham" had just stuck in a clause exempting people older than sixty-five. I wasn't sure what I thought about that, so I pushed the matter back in the queue.

By the time I had attended to these issues, the first of my visitors had arrived, a small vessel named The Smiling Dictator, and bearing a lone man. The craft crunched onto the beach, and the guy jumped out.

Jack Cortez—"Cortez the Queller" in the ubik—resembled a racing greyhound in slimness and coiled energy. He wore a fisherman's vest over bare chest, a pair of denim cutoffs bleached white, and boat shoes. His SCURF showed as a dark green eagle across a swath of his chest.

"Ahimsa, Jack! I really appreciate you showing up."

"No problem. The Church still owes you for retrieving that Madonna. But you gotta do some work nonetheless! Come on and give me a hand."

I went over to the Dictator and helped Jack wrestle some foam-encased objects big as coffee-table-tops out of the boat. When we had the half-dozen objects stacked on land, he flaked off some of the protective foam and revealed the corner of a window frame.

"Six smart windows. Variable opacity, self-cleaning, rated to withstand Category Four storms. Fully spimed, natch. One of our co-religionists is a contractor, and these were left over from a recent job."

By then, the rest of the boats had arrived. A perfect storm of unloading and greeting swept over my little domain. Crates and girders and pre-formed pilings and lumber and shingles and equipment accumulated in heaps, while bottled drinks made the rounds, to fortify and replenish. The wiki known as the Shewookies had brought not materials nor power tools but food. They began to set up a veritable banquet on folding tables, in anticipation of snacking and lunching.

A guy I didn't recognize came up to me, hand extended. His SCURF formed orange tiger stripes on his cheeks and down his jaws. Before I could bring up his tag, he introduced himself.

"Hi, Russ. Bob Graubauskas—'Grabass' to you. Jimmywhale for the Sunflower Slowdrags. So, you got any solid preferences for your house?"

"No, not really. Just so long as it's strong and spacious and not too ugly."

Grabass began to issue silent orders to his wiki, a ubik stream he cued me in on. But then a big woman wearing overalls intervened.

"Margalit Bayless, with the Mollicutes. 'Large Marge.' You truly gonna let the Slowdrags design this structure all by themselves?"

"That's good. Because my people have some neat ideas too—"

I left Large Marge and Grabass noisily debating the merits of their various plans while I snagged an egg-salad sandwich and a coffee. By the time I had swallowed the last bite, both the Mollicutes and the Sunflower Slowdrags had begun construction. The only thing was, the two teams were starting at opposite ends of a staked-off area and working toward the common middle. And their initial scaffolding and foundations looked utterly incompatible. And some of the other wikis seemed ready to add wings to the nascent building regardless of either main team.

As spimed materials churned under supervison like a nest of snakes or a pit of chunky lava or a scrum of rugby robots in directed self-assembly—boring into the soil and stretching up toward the sky—I watched with growing alarm, wondering if this had been the smartest idea. What kind of miscegenous mansion was I going to end up with?

That's when Foolty Fontal showed up to save the day.