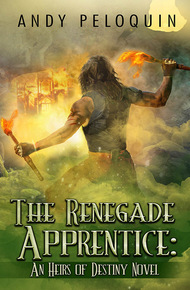 I am, first and foremost, a storyteller and an artist—words are my palette. Fantasy and science fiction are my genres of choice, and I love to explore the darker side of human nature through the filter of heroes, villains, and everything in between. I'm also a freelance writer, a book lover, and a guy who just loves to meet new people and spend hours talking about my fascination for the worlds I encounter in the pages of fantasy and sci-fi novels.

Speculative fiction provide us with an escape, a way to forget about our mundane problems and step into worlds where anything is possible. It transcends age, gender, religion,race, or lifestyle—it is our way of believing what cannot be, delving into the unknowable, and discovering hidden truths about ourselves and our world in a brand new way. Fiction at its very best!

The Renegade Apprentice by Andy Peloquin

Evren's life as an apprentice priest is an endless torment, until he seizes the chance to escape his slavery. But his freedom, and his life, may be cut very short because the dark alleys of Vothmot hold their own dangers...some deadlier than others!

Read the thrilling Heirs of Destiny prequel novella! Find out the secrets of Evren's grim origin—it's a gripping, heart-pounding ride...

At this early hour, few merchants had opened their stalls and only a trickle of people wandered through the marketplace. A single caravan rode past, treasure-hunters doubtless intending to get an early start on their trek through the Empty Mountains.

Evren planted Daver on a corner where the main avenue through Vothmot connected with the road to the North Gate.

"Hold out your hand, and do your best to sound as pitiful as you look, eh?" He gave Daver a smile, which sent throbbing pain through his healing lip. "I'll be nearby watching for Lecterns. We leave the moment you get enough coin for breakfast."

The sun peeked its golden face over the eastern horizon, bathing Evren with welcome warmth as he took up position on the corner opposite Daver. His vantage offered a clear view of the avenue that led through the Prime Bazaar toward the Court of Judgement. If any Lecterns or Wardens came from that way, he'd see them first.

The flow of traffic began to increase as more merchants, wagoneers, and fortune-seekers crowded into the Prime Bazaar. The Mistress' luck smiled on them, and within ten minutes, a grey-haired man in the rough-spun tunic and cloak of a pilgrim deposited a coin in Daver's outstretched hand. He'd barely shuffled up the street before Daver leapt to his feet and ran toward Evren.

"Look!" he said, excitement sparkling in his eyes. "A whole silver half-drake."

Evren's heart leapt. "That's enough for a good meal, a change of clothes, and some shoes!"

"No it ain't," came a quiet voice from behind Evren. "That's enough to earn you a beating instead of a knifing."

Evren's gut clenched at the menace in the words. He spun to meet the threat and found himself face-to-face with a tall, dark-haired boy.

The youth wore clothes far filthier and more ragged than Evren's own, and his black hair stuck out at wild angles from his head, forming an erratic halo around his angular face. He stared down his hawkish nose at Evren. "Big mistake, angling on our turf." He stuck out a muddy hand. "Hand it over, and I'll tell my lads to take it easy on you."

Evren spotted three smaller, equally mud-stained and disheveled boys hovering behind. They looked at least a year or two younger than the speaker, who had to be around Evren's own age.

"No," Evren said. He took the coin from Daver and held it in a clenched fist. "This is ours, but you can have your turf back. We're just—"

"Just trespassing is what you're doing." The boy took a threatening step closer, towering a full hand's breadth taller than Evren. "Either hand it over, or my boys and I will cut off your hand, then pry it from your severed fingers."

The words were doubtless meant as a threat, but Evren felt no fear. He'd been threatened by youths far larger and tougher.

"You're welcome to try," he snarled in a low voice. "But it might not turn out like you expect."

A knife suddenly appeared in the boy's hand, and he pressed the tip under Evren's chin. "You sure about that?"

Evren raised an eyebrow. "What, you're going to kill me here? In the middle of the Prime Bazaar?"

"No." The boy smiled, revealing two missing incisors. "I'm going to drag you into the alleyway and kill you there."

Two of the smaller boys grabbed Evren's arms, and he allowed them to push him past the street tough, around a corner, and down the alley. His teeth clenched as he heard Daver cry out, but he knew he was the target for their punishment. They'd only beat on Daver once they finished with him—they had to break the stronger of the two in order to send a message. These street toughs were a lot like the eighth and ninth-year apprentices.

Well, there was one real difference. They were Evren's size or smaller, and they had no idea what he could do.

The moment he was out of sight of the Prime Bazaar, he moved. He jerked his right arm up, tearing it free of his captor's grip, and drove the tip of his elbow into the boy's nose. A loud crunch echoed as the boy cried out and clapped a hand to his nose. Evren brought his right fist whipping across his body and drove it into his other captor's stomach, right beneath the ribs. The boy gave a loud "ugghh" and doubled over.

The oldest street tough's eyes went wide as he saw his two comrades fall. Evren drew back his fist and lashed out with a powerful punch that caught the bigger boy in the jaw. The dark-haired youth sagged, his head reeling. Evren cleared the distance to Daver's captor in two quick shuffling steps and brought him down with a quick jab and an uppercut to the chin.

"You hurt?" he asked Daver.

"No, but—" Daver's eyes flew wide and locked onto something behind Evren.

Evren ducked and spun in one smooth motion, and the dark-haired boy's balled fist sailed over his head. Before the street tough could recover, Evren drove a quick punch into his kidney, then another into his liver. The boy fell back against the wall with a groan.

Evren whipped out his knife and pressed it to the boy's throat. "You sure you want to keep trying to take my coin?"

The dark-haired boy blinked to clear his eyes then froze as he felt the steel against his neck. "No!" he said, careful not to move. "Coin's yours."

"Thank you." Evren removed the knife but didn't sheath it. He backed toward Daver, never taking his eyes off the street tough. "Now, if there's nothing else, my friend and I will be on our way."

"How about you join us?" the boy asked.

The question caught Evren by surprise, and he nearly stumbled. "What?"

"Join us." The boy gave Evren another gap-toothed grin. "Fists like yours'll come in right handy when facing the other crews. And that knife of yours is mighty nice."

Evren glanced down at the wooden-handled knife Daver had stolen from the temple kitchens, then at the rusted blade the dark-haired boy had dropped. His knife seemed a weapon of legend by comparison.

"Thieves, beggars, pickpockets, whatever we need to be." Again, with the beaming smile that showed too-few teeth. "How we make our coin's less important than the fact that we make it. We've got warm beds, food in our bellies—or at least, some food, provided Porky here don't eat it all."

One of the smaller boys, a rotund lad who barely reached Evren's shoulders, blushed.

"And you want the two of us?" Evren asked.

"Well, the invite's for you," the street tough said, "but if you two are joined at the hip—"

"Fair enough, I suppose." The dark-haired youth stroked his scruffy, fuzz-covered chin. "So long as he makes enough coin to pay his way, he'll fit in well enough."

Evren hesitated. Until a few hours ago, he'd been an apprentice, training to be a priest at the most respected temple for a thousand leagues. Now, he was going to be a thief? Anything was better than the horrors that awaited him in the Master's Temple.

"Deal," he said, thrusting out a hand.

The dark-haired youth eyed it, then shook his head. "Nuh-uh. The offer's mine to make, but the final decision ain't. You want in, we've got to take you to the Warren to see the Red Grinner."