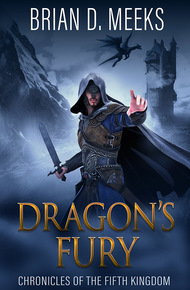 He is a snarky fellow of 53 with delusions of youth, who has written nineteen novels and never realized how much time each day would be spent searching for his reading glasses…which are often lost on his person.

It was an old grudge…

…and this time the dragon was an adult.

Is Marl going to get his friends killed?

You'll adore this first book in the Chronicles of the Fifth Kingdom, because the adventure is just beginning and this dragon wants more than treasure, he seeks power.

He rode as hard as the horse would go. At the cottage, Callista was sitting by the fire sharpening a curved dagger and singing a soft melody.

The horse had barely stopped, and Marl was off and said, "I've got the stuff for Jenson, where is Raina?"

"She's sleeping, but I'll brew up what we need," Callista said with a nod to a small table with the other ingredients in little piles ready to go. "It will take all night, as the uddeomille needs to be added in incredibly small increments over time to let the potion build to the strength we need."

"Is there anything I can do to help?"

"You could put the horse away. She looks beat. I have everything I need, but after that, if you want to keep me company, it might help pass the time."

Marl didn't mind putting away the horse. At the stable behind the cottage, he found his horse had been well cared for while he was chasing down the uddeomille. He put away the saddle and tack, filled the trough with some oats and filled the water trough, too.

Taking care of animals was one of the jobs he enjoyed at the inn. He had a boy from the neighbor's farm who worked there, but often he would do it himself, if the bar wasn't too busy. It was his place to think.

He needed to think.

It was clear that Jenson wasn't going to be in any shape to travel, and he couldn't wait for him. Who knew what devastation was being wrought by Aldrei? Who could he get to replace him?

And the more important question, what would it take to defeat an older Aldrei? The last time their party was just enough to drive him away, but it was more a draw than a win. The dragon was still growing into his prime, while Marl was six years further into decline. The battle earlier had shown him how much.

Returning to Callista by the fire, Marl sat down. She continued to hum as she scraped ingredients into the pot.

Marl pointed at her whetstone and asked, "Do you mind?"

He took a seat and began to work on his blade.

Callista stirred the concoction and asked, "Where are you headed from here?"

"I'll probably ride back into town tomorrow and see if I can find a blade to replace Jenson."

"Was he a pretty good fighter, then?"

"Gran tells me you're going up against a dragon. Don't you need better than alright?"

"What I need is a miracle."

"It sounds like a dangerous adventure," she said, with a suspiciously casual tone.

Marl looked at her. He knew both her mother and grandmother, and if Callista was half as sneaky, he knew she was driving at something. "I wouldn't call it an adventure. We're not on a quest for a magic bobble. Aldrei is a danger to all that we love."

She smirked. "You sound like my teacher at the archery school. He's a chronically serious man with no imagination."

"The game around here has a thing about just wandering up and jumping in Gran's stew."

Marl went back to sharpening his blade.

She added a bit more of her herbs and said something over the pot. A blue flame shot up.

"That means we're on the right path. So, how are you going to kill the dragon?"

"Cunning and guile…or more likely luck and prayers. I fear it's grown beyond our means, but I won't know until we find out where it's living. Don't worry about you and your grandmother, I'll do everything in my power to slay the beast or drive it off again."

"I'm not at all worried. This cottage is the safest place in the world. When you get slaughtered, Gran will just put a spelling of hiding on the place. She'll be fine," She said with a casual certainty.

"Are you a diviner?"

"Yes, but I've not seen your death or anything. You seem to be pretty old for this sort of thing. And, it doesn't sound like you've got much of a plan."

"I'm not as young as I used to be, but there's still a good deal of fight left in these bones. As for a plan, it's not my first battle. I'll suss it out, and we'll be just fine."

She said it in a tone that reminded him of his mother when she'd caught him in a lie. He hadn't thought about her in twenty years, but that tone stays with a person, and he cringed a little thinking this barely a woman might be right.

Marl wiped a fingernail across the blade. It was getting there. The fire crackled, and a bat flew overhead, its wings batting against the night air with the familiar thwap, thwap, thwap.

"By all means, do share with your vast experience on the field of battle and how you'd battle a red dragon. You're sixteen, right?" he said, knowing she was nineteen and feeling it would be a good rebuttal for the old comment.

"I'm nineteen," she said and continued, "You need to start with how you build your party, and you haven't mentioned anything about a healer in your group."

"My sister-in-law will pick up some potions," he said.

"That's not a great strategy. What happens when the potions run out?"

"I die and don't need to worry about the dragon anymore."

"What you need is someone who's good in a fight and can heal up you and your other old friends."

"You're not coming with us."

"Yes, I am. You need me. I'm great with the bow, and grandmother has taught me more than just healing spells."

"I've never met a mage who could shoot worth a damn."

She stood up, pulled her bow from the ground behind her, and fired three arrows in rapid succession into the top log on a pile of wood at the far side of the property. It was a good shot, and all three landed dead center.

Marl was impressed, but he didn't let her know. "We're not hunting rabbits. Dragons fight back."

"I can cure poison, burns, frost, and magical attacks that render you weak and confused. And then there's my wand. I'm starting to learn a spell that can freeze a human for up to five seconds. It might come in handy."

"You're starting to learn? It sounds like you can't do it. That doesn't fill me with confidence."

"Well, sometimes it works, and sometimes it fails miserably. I've been freezing the stable boy," she said with a laugh.

"I think he does, which is why he puts up with it. It doesn't hurt him—stops him for a bit."

"Listen, I appreciate your enthusiasm, but you're too young. And I'm not interested in being the one that gets the silver witch's granddaughter killed." His look said it was the final word on the matter.

Callista gave him a dirty look that said it was not the final word on the matter.

They sat without a word for most of the rest of the night. Marl finished with his sword and worked on a couple of knives.

When the potion was close to done, Callista left and returned with her grandmother. "It seems like we've got it, Gran."

Raina took the spoon and dabbed a bit on the palm of her hand. She spoke some words and, using her index finger, swirled the shiny gray concoction in her hand. It glowed for a moment and then hissed for a moment before popping and evaporating into a tiny pale green puff of smoke.

Marl watched with fascination. "And he's meant to drink it?"

The old witch ignored Marl and turned to Callista, "That's a fine potion you've brewed up. It will save his life. Take it to him now, dear."

"You're a good woman. Starting with Jenson's death on my conscience wouldn't have been a good sign."

"You have a decision to make, don't you? You'll need to replace Jenson."

"Didn't I just have this conversation with Callista?"

With a laugh, Raina touched her nose and winked. "She's like her mother, who was more like me than I wanted. Probably a punishment from the gods for my wicked ways."

"I didn't think you believed in the gods."

"I do when it's convenient."

"So, I imagine you want to tell me what I should do next?"

"Oh, I'd never presume to tell a fierce warrior like you how to fight a dragon. But you should take Callista with you."

Marl roared. "And what would you do to me if I got your granddaughter killed?"

Raina tilted her head sideways and wrinkled her nose. There was a bit of quiet, and she considered her answer. "Well, I can't give you the specifics of the curse, but it would be both painful and annoying. Plus, I'd make sure it was nigh on impossible to break. I think you'd best bring her back in one piece."

"That's why she's not coming."

The old witch stood up, strode over to Marl, bent down, and put her hands on his face. "You need her, and her life journey goes through that dragon. I've seen it. It's destiny, but that doesn't mean you don't need to fight through hell and back to keep her from harm. I'll tell her to pack her bag."

"I can put that curse on you, now, if you prefer."

He stared at the frail-looking woman who seemed to tower over the argument that he was going to lose. "We'll leave in the morning."

"You're a good boy. Now get some sleep. Saving the kingdom is going to take more than you imagine and twice what you have."