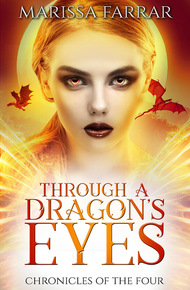 Through a Dragon's Eyes by Marissa Farrar

In a world where dragons are extinct, and magic is banned, can four races come together to restore the power of the Dragonstone and the Dragonsayer?

In the human city of Anthoinia, Dela Stonebridge has already lost her brother tothe Choosing.

Now it's her turn.

The grueling journey across the mountains is always dangerous, but whenmagic and madnessdescends, she discovers herself exiled with the leaders of the three other races.

The Norc, Warsgra, is huge and brutish. The Moerian, Orergon, is practically a savage. And the Elvish prince, Vehel, hides a secret that has the power to tear their world apart.

But asunlikely friendshipsare born and the truth is revealed, Dela must accept if she has the power of amagiclong thought dead...

The scream barreled out of her lungs as her feet lost contact with the ground, and she was suddenly suspended in the air. The massive insect legs that had caught her were like iron bars clamped around her torso, squeezing her tight. She wasn't sure she would even be able to breathe, and it felt as though each time she exhaled, the legs squeezed a little tighter, so she was unable to take the next breath in.

Beneath her, the ground moved in a blur. Where in the Gods' names was this thing taking her? To feed her to all its giant grub babies, she realized with horror. She didn't want to die as maggot food.

She barely heard the yells of the others above the insanely loud buzzing. The creature flew forward, banking in one direction, and then the next, whipping Dela's head from side to side. She struggled in the thing's grip, but the way it had grabbed her meant her arms were clamped by her sides. She couldn't even kick the creature as gravity forced her legs to hang down.

They followed the line of the river, zigzagging back and forth. Motion sickness and being unable to breathe deeply left her dizzy and faint. She didn't want to pass out. Though being unconscious might be a welcome parting from her current situation, the thought of not knowing what this creature was doing with her was even worse. She didn't want to wake up to find herself being chewed on by maggots, or having eggs laid into her skin. She'd do everything in her power to keep herself awake so she could fight back.

To her right towered a high, muddy riverbank, with several large holes dug into the side. As they drew closer, she saw a second of the insects emerge from one of the holes and fly off, the buzzing doubling in volume for a moment before it faded away. They were still flying at a breath-stealing speed, and as they flew toward the bank, Dela tightened every muscle and squeezed her eyes shut, preparing herself for impact, certain she would end up slammed against the muddy bank hard enough to break every bone in her body. Instead, sudden darkness surrounded her, and the buzzing stopped. Her ears were still ringing from the racket.

Cold, wet, muddy walls surrounded her. The insect held her close to its fuzzy underbelly as it crawled forward, taking her deeper into the riverbank.

Despite her fear and panic, Dela tried to formulate a plan. She hoped the creature would just store her here and leave again. In which case, she'd be able to simply crawl back out of the hole and run to safety. If the creature didn't leave, she had her dagger wedged in her belt. She didn't want to get into a fight with the thing, and worried that if she managed to kill it, its massive body would fill the hole, and she wouldn't be able to get past, and then she'd stand the chance of being stuck down here until she died a slow and painful death. No, she'd probably run out of air before that happened, and suffocate.

Panic threatened to overwhelm her and she bit down on it, knowing she'd lose the ability to think clearly and that it might be the death of her. Still, she felt as though she was trapped in a nightmare, and she desperately wanted to wake up.

Finally, the insect stopped. Its grip on her released a fraction, and she was able to suck in a breath of stale, mud-tainted air. But she remained as motionless as possible, not wanting to do anything to remind the creature that she was there. Please go, please go, please go, she prayed over and over. The insect continued to shuffle back and forth, but again its legs released around her, dropping her fully onto the muddy tunnel floor, so she landed on her hands and knees. Cool dampness sank into the knees of her pants, reminding her of the previous day when she'd first knelt at the riverside to take a drink. How she wished she was back with Orergon, Vehel, and Warsgra right now. What would they be doing? Would they try to find her, or would they assume she was dead and not waste any more time on her? She prayed they wouldn't give up. They barely knew her, and she was a human, who they all despised, but she hoped they'd seen something about her that would make them want to at least attempt to save her.

She couldn't rely on others saving her, however. No one helped someone who refused to help themselves.

As the insect gave her more room, she was able to slide her hand down toward her belt, where the hilt of her weapon rested.

She wanted the thing to leave, figuring that would be a far better option than her attacking it first. Getting into a fight with the insect was not how she wanted things to go, but she needed to be prepared for the possibility. She was still curled up beneath its body, but her hand slipped lower, her fingertips brushing the hilt of her dagger. Her fingers tightened around it, but then the insect moved. It had managed to turn itself around in the confined space, and Dela froze, her heart pounding as it moved over top of her. It was leaving! Thank the Gods!

She had to hold back a sob of relief as the insect passed back over her, its legs no longer surrounding her torso, only its tail above her now. She held her breath in the darkness, huddling tight into herself, trying to make her body as small as possible so it didn't notice her.

There was a sudden swiping through the air above her, and something sharp punctured the back of her neck. Dela gave a cry of shock, unable to stay quiet any longer. The thing had stung her! Her fingers tightened around the hilt of her dagger, and she went to pull it out and stab the creature in the belly, but instead of pulling out the knife, her fingers barely moved.

A fresh spurt of fear blasted through her.

The giant insect continued the way it was going, leaving her alone in the wet, dark tunnel. It left the entrance, taking off into the air, the movement of its massive wings vibrating down the burrow. Through the gap it had left, she could make out a pinprick of light that signaled the entrance. All she had to do was get to it, just crawl down the tunnel far enough to drop out the end. She didn't even care that she'd most likely fall directly into the water beneath and possibly be carried away on the rapids. Anything would be better than dying in a black hole with the possibility of being fly-food. But when she tried to reach out to drag herself forward, her arm wouldn't even move. She kicked out a foot, but though the movement happened in her head, her body remained motionless.

A thin whine of fear escaped her throat, and her breathing came quick and fast. The sting on the back of her neck didn't even throb anymore, and the aching that had become a part of her since leaving Anthoinia what felt like a lifetime ago had also vanished.