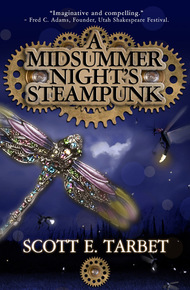 Scott Tarbet writes enthusiastically in several genres, sings opera, was married in full Elizabethan regalia, loves steampunk waltzes, and slow-smokes thousands of pounds of Texas-style barbeque. An avid skier, hiker, golfer, and tandem kayaker, he makes his home in the mountains of Utah with his best friend/wife Jewels.

Pauline Spiegel, a master artificer like her mother before her, wants just one thing: to wed the love of her life, Alexander MacIntyre, a lowly undersecretary of the Royal Household. However, a long-term pact between her parents, and a noble House, stands between her and her happily ever after. When a priceless mechanoid of unfathomable power is stolen, Pauline finds herself entangled in skullduggery and international intrigue, upon which the fate of nations rest. Only with the help of her friends, and a brilliant scientist with a swarm of micromechanical insects, can Pauline survive the dark forces determined to destroy her. But will her betrothed and his rag-tag band of semi-mechanical soldiers reveal Alexander's secrets as well?

Immerse yourself in this Steampunk retelling of Shakespeare's classic, replete with the newfound wizardry of alternative Victorian technology, mistaken identities, love triangles, and deadly peril, set against the backdrop of a world bracing itself for war, and Victoria's Diamond Jubilee.

Steampunk isn't just retrospective science fiction, it's a chance to wildly reinvent the past and push it into the fantastical… only with gears and steam instead of wands and magic. Scott Tarbet's A Midsummer Night's Steampunk is just that kind of book: a fantastical, delicious treat of mecha-men, mad scientists, and buzzing, flying automatons. He transforms this Shakespearean story in a way the bard would never have imagined! – Susan Kaye Quinn

From one end of the sprawling London metropolis to the other, over palaces and hovels, elegant townhouses and pitched timber docks and warehouses, the micromechs fluttered.

They rode the summer breeze through every open window, swooped down chimneys, crept in at every crack and crevice. Their multi-faceted eyes searched and their ears recorded, their tiny feet carried them silently across the ceilings of peopled rooms. Mingling with the insects of high summer, they went unnoticed and unremarked, even in the infrequent street corner pools of gas light through which they flashed on whirring, iridescent wings.

In her private dirigible Ganesh, moored with other private and public airships in the Air Terminus above Victoria Station, their Queen waited patiently for their reports, her portal open to admit the summer breeze and her fluttering charges returning from the city below. They flitted around her brilliant crimson and gold sari like the dragonflies and hummingbirds and other flying beings they had once been, surrounding her like a dazzling bloom in the Indian jungle.

One by one their leaders—Cobweb, Peaseblossom, Mote, and Mustardseed—flitted past and whispered their negative reports into her ear: no sign of the half-man, the huge dazzlingly black mech who had stolen the automaton, Jubal, and fled India for England. But she was calmly confident.

The night was young, the breezes were light, the micromechs were spreading rapidly and methodically from the airship across the city from south to north, from west to east, and he would inevitably be found. Jubal was immeasurably more valuable than the king's ransom price of the massive blue diamonds at his heart and in his eyes. He must be found before the black mech or his master stumbled over his true worth.