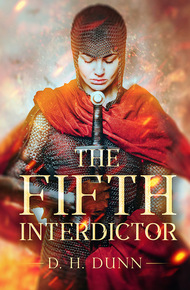 D.H. Dunn writes fantasy and adventure fiction and is the author of seven novels, including the FRACTURED EVEREST series.

A former U.S. Navy sailor, he now wanders the coasts and forests of Maine, looking for hope and adventure wherever he can find it.

The Fifth Interdictor by D.H. Dunn

WHAT WOULD YOU TRADE FOR THE TRUTH?

She is the Fifth Interdictor, a powerful warrior imbued with magical abilities and the gift to see into the future.

She has no name or history, no memory of who she was before she became the proud and noble defender of her King, keeping the people safe through her potent sorcery and skill. What need did she have for a past, when the present and her role in it was so clear and easily understood?

Yet every aspect of her life is cast into question when her latest vision shows the next assassin to be none other than the Fifth herself!

Each step toward the hidden answers of her existence takes the Fifth farther away from her power, her own magical abilities betraying her more with every uncovered lie. Will the Fifth discover the truth before it is too late, or are these the final days of THE FIFTH INTERDICTOR?

THE FIFTH INTERDICTOR is a fantasy novella from D.H. Dunn, the author of the FRACTURED EVEREST series.

The Fifth's heartbeat remained steady, her breathing calm and focused as she faced the would-be assassin in the Spire's throne room. The stunned wedding crowd had scattered to the corners and shadows, anticipating as she did what was about to come. She could see the fear in the man's crisp blue eyes, his terror at facing her. As a pair, they both knew the truth, the only truth that mattered.

She was the Fifth Interdictor, the Konhra's sworn defender. By choosing to face her, this man was already dead.

The moonlight shone through the Augur, the tall window of glass and color behind the Konhra. It bathed the Fifth in a rainbow of eldritch light, glinting off the silver of her mask like a falling star.

She cast a glance at the small nuptial gathering as they cowered. The bride and groom, family, and friends. Both were concepts the Fifth barely understood or needed.

Earlier the bride's father had boasted of the honor of the location, the privilege of his daughter being married in the Konhra's presence.

Now they hid behind their seats and tables, leaving the Fifth and the assassin alone on the central marble platform, where the happy couple had danced just moments before. The larger man advanced slowly, clutching his curved weapon inside a trembling fist.

Behind the crowd, the Konhra himself looked on from his dais, surrounded by the defense of his watchers. The half-circle of men and women had created a perimeter around their liege, leather armor forming outlines against the bright crimson and gold of their cloth uniforms.

As wide as he was tall, the Konhra towered over his assigned defenders, the authority he radiated at odds with the fear on his face. She could see his labored breathing as he fidgeted within his protective enclave, his beet-red face matching his watchers' garb, his breath pushing through a heavy, dark beard.

The Fifth knew her liege enjoyed the spectacle but was too frightened to expose himself further to gain a clearer view. His watchers, men and women sworn to protect their ruler kept their hands at their sides, their weapons sheathed.

At their forefront stood Selthri, a frown barely visible beneath the dark hood that covered her head, the Captain's arms folded with a long dagger clutched in each hand.

Like the Fifth, Selthri's features were covered by a mask of sorts, the woman hiding her face behind dark makeup and a shadowed hood. She was sure the watch captain longed to be on the marbled floor instead of her, cutting down this enemy with the ruthless efficiency she was known for.

Yet Selthri's blades would stay in her hands, just as her watchers would keep their swords sheathed at their waists. They knew their weapons would not be needed. This moment belonged to the Fifth, and she was all the protection the Konhra would ever need from an assassin.

Only an arm's length away, her attacker looked down at her, his eyes shifting between determination and fear, a tide that ran through him as he faced his last moments. His sandy-brown hair was cut short, as she had known it would be. He had a scar over his left eye, a small tattoo on the left side of his neck. All the details were exactly as her vision had shown her, just as they always were.

She knew this man's face, had seen him standing in the center of this very room. The image had been burned into her mind when her vision showed him to her seven days earlier. She had known the man would be here the moment the idea had become fully formed in his mind

As he had in her vision, the man kept his back to the water pipe that had erupted moments ago. The air around them grew thick with the damp humidity, a stark contrast to the glass-rattling winds she could sense raging outside the Augur.

The pair stared at each other across the marble, a huge geyser pipe behind each of them, framing the duo in copper and steam. She stayed motionless as his gaze darted between the Konhra and her—his target and the obstacle.

The gasps and cries of the onlookers faded into silence as the Fifth pulled from the Gift, the magical energies flowing through her, running through her veins like a second blood. As always, the anticipation of release was almost as pleasurable as the moment itself would be. After hours of standing in the background, watching as the others did what others do, laughing, dancing, kissing, finally here was a moment she could understand, the moment where the Augur would allow her purpose and reward.

Through her mask, she studied the man. His hair was unkempt, his face worn and tired. He was dressed as one of the wedding's cook staff, but underneath she could see the azure blue of a navy uniform. She surmised that he had stolen the uniform and changed in a hurry. Though the vision had come seven days ago, the operation seemed poorly planned. If the Fifth had not known he would be here, it seemed likely watch captain Selthri would have spotted him anyway.

The man was physically much larger than she, the life of a sailor had left his muscled frame tan and leathered. Despite this, she could see the fear in his eyes as he loomed over her. His left hand shook so imperceptibly that few but she would have noticed it.

She suspected the blade was poisoned, assassin's weapons often were. For the Konhra that would have been a concern. For the Fifth, there was no poison that could threaten her. As he gazed upon his reflection, distorted in the clear silver of her featureless mask, his face trembled.

She let her fingers relax, her weaponless hands clenching and unclenching. The Gift might provide her power and ability, but her tactics were her own. The Fifth preferred to react, so she watched and waited.

He made his choice, if choice it was. His left arm twitched, his right foot planted. Beneath her mask, she smiled. After days of waiting, the dance began.