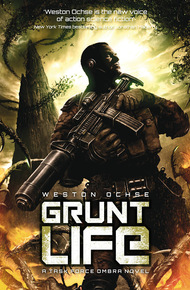 WESTON OCHSE is a writer of nearly thirty books in multiple genres. His young adult novel Ghost Heart, co-written with Yvonne Navarro, has been compared to both The Dark Tower and Something Wicked This Way Comes. His military supernatural series SEAL Team 666 has been optioned to be a movie starring Dwayne Johnson and his military sci fi trilogy, which starts with Grunt Life, has been praised for its PTSD-positive depiction of soldiers at peace and at war. Weston has also published literary fiction, poetry, comics, and non-fiction articles. His shorter work has appeared in DC Comics, IDW Comics, Soldier of Fortune Magazine, Cemetery Dance, and peered literary journals. His franchise work includes the X-Files, Predator, Aliens, Hellboy, Clive Barker's Midian, and V-Wars. Weston holds a Master of Fine Arts in Creative Writing and teaches at Southern New Hampshire University. When he's not being deployed to Afghanistan, he lives in Arizona with his wife, and fellow author, Yvonne Navarro and their Great Danes.

Benjamin Carter Mason died last night. Maybe he threw himself off a bridge into Los Angeles Harbor, or maybe he burned to death in a house fire in San Pedro; it doesn't really matter. Today, Mason's starting a new life. He's back in boot camp, training for the only war left that matters a damn.

For years, their spies have been coming to Earth, mapping our cities, learning our weaknesses, leaving tragedy in their wake. Our governments knew, but they did nothing - the prospect was too awful, the costs too high - and now, the horrifying and utterly alien Cray are invading, laying waste to our cities. The human race is a heartbeat away from extinction. That is, unless Mason, and the other men and women of Task Force OMBRA, can do anything about it.

This is a time for heroes. For killers. For Grunts.

Somewhere along the line I'd ceased to be a hero and had become a death merchant. The very term hero had become a laughable idea. "Who do you think you are, a hero?" my platoon sergeant had once asked. I'd wanted to respond that I did, that I was, but I knew that he'd already turned that corner where he no longer cared about the mission, but just wanted to survive. Heroism was so far beyond him he might as well have been back on his couch, getting fat and watching other people play sports. It was then that I'd realized that there would come a time when I'd be just like him. If I ever got to the point where I didn't know the difference between a hero or a zero and lost my grip on what's right and wrong, I promised myself that I'd end it.

So here I was.

Opened in 1963, the Vincent Thomas Bridge had a clearance of one hundred eighty-five feet, which was like jumping from an eighteen story building. It used to be lit by only a few random bulbs, but in 2005 that had been changed to a hundred and sixty solar powered LED lights. It looked like I was about to leap from the side of an alien spacecraft.

I tensed my body and prepared myself. I'd decided not to swan dive. That worked in the movies, but it was the sort of stupid gesture that would make me tumble and flail in my final moments. The last thing I wanted at the end was to be out of control. My design was to jump straight out and allow gravity to bring me to grace.

"This could be a beginning instead of an end, you know?"

The voice startled me so much that I almost slipped and fell right then. I saw a figure climbing over the rail. Dressed in a black suit with a white shirt and a black tie, he had a drawn, pallid complexion. Like that actor from Reservoir Dogs; what was his name?

Was he being serious? "What the fuck are you doing here?"

"Trying to see if we can convince you to stick around for a while." The man seemed at ease and spoke with the authority of an officer. Closer now, I saw the pockmarks on his thin face. That was it: I was thinking of Steve Buscemi.

"No, but we know you. Benjamin Carter Mason, assigned to 173rd Airborne Brigade Combat Team in Logar Province, Eastern Afghanistan and on leave in Los Angeles, until your untimely death in a house fire."

Wait a minute. Was I already dead? Was this the synaptic backwards flip of a brain that had already become lifeless?

"I assure you that you're not crazy." Mr. Pink grinned and held up a finger. "At least not to the degree to which you think."

"I didn't die in a fire," I said with as much authority I could muster under the circumstances.

"Au contraire," Mr. Pink said, pointing towards San Pedro. A point of light expanded, becoming a raging orange blob. "Seems there was a gas leak. They'll find a body inside matching your general height and weight. During the autopsy when they check your DNA and fingerprints, they'll find that they match the deceased. They were lucky the fire didn't spread to the rest of the apartment complex. Your next door neighbor, Ms. O'Brien, is passed out in her chair, sleeping through a rerun of Survivor."

After a few moments of staring at the fire, I managed to stammer, "Why are you doing this?"

"It seemed to us you were determined to end your life. We hastened to help so that you can start a new one."

"No one you've ever heard of."

I couldn't help but laugh. I'd seen some version of this in several bad made-for-cable movies. Then again, I'd also seen movies about how insane people believe in conspiracy theories or that everyone is out to get them. A line of dialogue from a Woody Allen film came to mind. 'There's a word for someone who believes that everyone is conspiring against them—perceptive.' I also remembered my favorite radio talk show host, The Night Stalker. 'Conspiracies are what smart people call the truth, and what stupid people call too complicated to be real.'

Conspiracy or no conspiracy, whether they substituted my body or not, whether they wanted me to work for them or not, didn't change the fact that there were people, places and events I could never remove from my mind... things I'd done and hadn't done, which could only be obliterated by an eternity of nothing.

"You shouldn't have gone to all the trouble," I finally said.

I was in free fall for three glorious seconds before I hit the net. I bounced once, twice, three times, then got my legs entangled. By the time they lowered me to the ship below, I was calling their mothers things that would shock even a jail house whore.