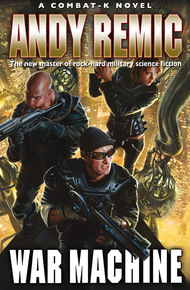 When kicked to describe himself, Remic claims to have a love of extreme sports, kickass bikes and happy nurses. Once a member of an elite Combat K squad, he has retired from military service and claims to be a cross between an alcoholic Indiana Jones and a bubbly Lara Croft, only without the breasts. Remic lives in Lincolnshire and likes to think lewdly about zombies.

In a time of post-Singularity and FTL travel, the Helix War has raged across galaxies. Ex-soldier Keenan now works as a private investigator on a planet at the peaceful fringes of the Quad-Gal. Following the brutal death of his family he's run up hefty debts, gained a bad reputation and become a heavy drinker. When a prince from the Jervai Province offers him a case on a dangerous colony world in exchange for clues that may lead him to his family's murderer, he accepts the job without hesitation. However, to have any chance of success he must gather together his old military unit, a group who swore they'd never work together again…

"We are here regarding the Combat-K situation."

"Yes. It is being dealt with."

Kotinevitch smiled with her lips, but not her eyes. "We are waiting for a sign before we progress."

"A sign?" Jukan snorted, shaking his head. "I should have known better than to deal with a backward people such as the Krell; you are obsessed with trivial pagan totems, indoctrinated by a dark pseudo-religion that should have died ten thousand years ago—yes—along with your devil-decimated clans!"

A second man reached forward, placing a hand against Jukan's shoulder: a reminder, a physical note of caution. You go too far, said that humble touch.

"I apologise." Jukan composed ruffled feathers. "This land is too warm for my liking. And your arrogance and lack of manners to a superior Quad-Gal officer are far from appreciated in one so..." he savoured the word, "renowned."

Kotinevitch reached forward, lifted a tiny brass bell and gave it a ring. The high-pitched chime sang across the chamber. A small woman entered dressed in a simple black robe and leading a Helk on a short TitaniumIII leash.

The huge beast lumbered uncertainly, hooves clacking on the marble, its triple nostrils snorting under snot-matted grey fur. Small bovine eyes moved in a large cubic skull, surveying the men suspiciously as the woman came to a halt. The Helk shambled to an almost mechanical standstill behind her.

"Ahh," Vitch smiled, "our omen has arrived." She stood, and in one fluid motion the yukana was unsheathed and slammed through the Helk's bulky neck in a shower of sparkling, suspended crimson. Vitch lowered her blade, where blood rolled free of the frictionless surface.

There came a slap as the huge shaggy head hit the ground, then the beast's front legs folded, and the creature rolled forward and pitched onto its flank. Vitch glanced sideways, to where the five men were bathed in splatters of gore, their neat uniforms stained, eyes wide in shock. Jukan's hand had gone to his gun, a Penta 8mm nail pistol; one of his companions restrained him.

Vitch shrugged free her robes so that she stood naked and coiled, then moved towards the twitching farm animal. She dropped to one knee and with a single strike opened the creature lengthways down its belly. Dropping to her other knee in the pulsing surge of blood, she placed her sword delicately to one side and reached inside the creature with both hands. She felt around as great swathes of intestine uncoiled, covering her knees and slopping arterial gore over her crotch and belly, until she pulled out a small purple organ trailing muscles and tendons, which popped free one by one. She lifted the fluttering organ to her face.

"This is the Helk's usma, similar in function to a human liver. A pure Helk eats grass and baffa, but some cattle become addicted to the Geddo flower, which poisons the usma, and in turn poisons the rest of the meat, creating a food that is highly toxic to humans. If you note, the usma should be pure black. But this? Gentlemen, this is corrupt." She paused. Her smile was sickly sweet, like the stench of putrefaction. "The Krell consider this a very bad omen." Her voice dropped to a whisper. Eyes gleamed. "It reminds us of the Days of Leviathan."

Jukan pulled his pistol, halting the weapon inches from Kotinevitch's face. "In the army," he growled, "they call you Vitch the Bitch. Now I see why. This is the way it's going to work. You move in front of us, very, very slowly, with my pistol in your back. You will lead us to our Hornet. If you so much as piss yourself, I'll blow a hole in you so wide I can climb through it. Do we understand one another?"

Vitch tossed the Helk's diseased usma into the air and dropped and rolled, spinning and coming up with her yukana; from kneeling through to standing, the matt blade sliced Jukan from left hip to right clavicle, exiting on a streamer of shoulder shards and blood mist. His body slid into two discrete pieces, and there came a vision of organic cross-section—spine, meat, yellow fat and peeled flesh—as it slid in opposite directions and left four sub-commanders staring in shocked awe.

"We understand one another completely," Vitch said, glancing towards the remaining men.

One took a step back, both hands coming up in supplication. "Wait..." he said.

Vitch leapt, and in three strikes turned the four figures into butchered meat. She smiled as limbs twitched around her and the stench of blood aroused her.

Through wide eyes set in a gore-splattered face, she licked at her green, salted lips.

She savoured the taste she found there.