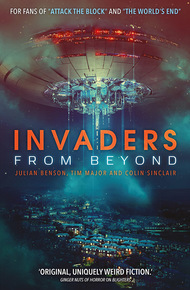 Colin Sinclair has spent what seems like forever writing things and stuff. Some of it has even seen the light of day. Most recently, he provided settings, background material and short fiction for Broken Rooms, an alternate-worlds tabletop roleplaying game with thirteen flavours of apocalypse. One of Colin's ever-so-short stories is in the Fox Spirit Books "Guardians" anthology and another appears in volume two of their epic "Girl at the End of the World" collection. His favourite word is indolent. He often wonders if his bio should have jokes.

Tim Major's time-travel thriller novel, You Don't Belong Here, will be published by Snowbooks in September 2016. His first novella, Carus & Mitch, was shortlisted for a This Is Horror Award and his short stories have featured in Interzone, Perihelion, Every Day Fiction and numerous anthologies. He is the Editor of the SF magazine, The Singularity. For more information visit cosycatastrophes.wordpress.com.

Julian Benson is the deputy editor at PCGamesN, a website about video games, their makers, and the people who devote their lives to them. Tired of concerned family members suggesting the low wages of video games journalism wouldn't be enough to support himself, he has started to write sci-fi novellas, where he is positive he will make his millions (Right, David?). He once interviewed the space pope of an online universe and he won't shut up about it.

Invaders from Beyond by Colin Sinclair, Tim Major & Julian Benson

WE ARE NOT ALONE…

It's one of the oldest devices in science fiction, from Wells' The War of the Worlds to Invasion of the Body Snatchers and The Thing. Why do so many aliens want to invade the Earth anyway? Who's going to stop them? Is this going to take long?

"First night at Friday Club," Etty says. "You have to fight."

Alone except for a low stack of wooden crates, piled four high, the top draped with ruffled green fabric. The lettering on the wooden slats is Spanish. I think. Portuguese? Whatever they speak in Brazil. I tilt my head back and consider the gaudy petals of flowers peeking out from the topmost crate. Orchids. Ultra-rare orchids from the remote highlands of distant Amazonian rainforests.

That's Jost talking. He's got an unmistakable too-many-cigarettes-and-started-far-too-young rasp to his voice. Also a no-nonsense spit-and-polish manner. He did something in the Army. He doesn't talk about it.

"You just concentrate on the job in hand."

My palms are slick with sweat, and I can feel a chill dancing down my back, like something crawling along my spine...

Think of something else. Something bright and—

"It's the smaller ones you got to worry about, isn't it?" Chas again. Ever helpful.

He leans across the barricade and drags the green cloth cover off the topmost crate.

"The larger creatures have got size to back off predators. It's the little scamps that have to kill things that threaten them, yeah? Big ones aren't so much trouble. I saw that on Discovery."

A massive black blob of something slides over the top of the open crate and marches down the vertical and onto the floor.

"Unless it's one of those," says Chas.

It's got fur, and lots of legs, and too many eyes, and—

"Piss off, Kelvin," says Chas. "Point is, right, it's in the fucking murder business, yeah?"

This thing is the size of my shaking hand and it's starting to move my way.

The spider rears up on its several back legs to show me it plays for keeps.

"Before it kills you."