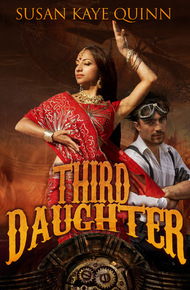 Skyships, saber duels, and lots of royal intrigue... and, of course, kissing.

The Third Daughter of the Queen wants her birthday to arrive so she'll be free to marry for love, but rumors of a new flying weapon may force her to accept a barbarian prince's proposal for a peace-brokering marriage. Desperate to marry the charming courtesan she loves, Aniri agrees to the prince's proposal as a subterfuge in order to spy on him, find the weapon, and hopefully avoid both war and an arranged marriage to a man she does not love.

Third Daughter is the first book in the The Dharian Affairs Trilogy (Third Daughter, Second Daughter, First Daughter). This steampunk-goes-to-Bollywood (Bollypunk!) romance that takes place in an east-Indian-flavored alternate world filled with skyships, saber duels, and lots of royal intrigue. And, of course, kissing.

From the author of the bestselling Mindjack Trilogy, The Dharian Affairs is a new series filled with equal doses of action-adventure and romance, meant to appeal to fans of Mindjack.

This is my book, so rather than telling you why you should read it, I'll tell you what I love about it. You see, every writer should be in love with their work… otherwise how can you bring your best storytelling to it? In Third Daughter, I love the muscular steampunk technology—it gave me a chance to put those engineering degrees to use, inventing on paper instead of in the lab. I love the east-Indian aesthetic, and because it's fantasy, I got to create three separate east-Indian-flavored cultures that represent the clash of ancient vs. modern India, steampunk technology vs. traditional culture, and the use of arranged marriages vs. marrying for love. Most of all, I love my stubborn, adventure-bound princess, and the heroic, self-sacrificing prince who falls for her. I love all these things so much that I made The Dharian Affairs a trilogy. With plans for more books after that as well! I hope you fall in love with Aniri's story as much as I did. – Susan Kaye Quinn

Below her stone rooftop, the shadows of the forested grounds danced in the summer's breeze, their small rustlings calling to her like a lover. The sound was the perfect cover for escape into the darkness and the warm arms she hoped to find there. No one should notice her absence. Of all the guards, handmaidens, and many silent keepers of the royal household, none would venture up to her private observatory this late in the eve. But she still had to be careful. Even this close to her birthday, the Queen would not be forgiving if she was caught.

Aniri scanned the palace grounds to make sure it was clear of any witnesses. The manicured lawns were empty: the only sign of life came from the distant embassy windows where gas lamps flickered and soft music trilled from late-reveling partygoers. Aniri pressed the leather eyecup of her aetherscope to her face, slowly turning the brass knobs to bring the party into focus. The instrument was meant for watching the rise of the twin full moons, but it worked well enough for spying on the Samirian ambassador and her assemblage of guests.

Their shiny new automaton was thick-legged and awkward, but the Samirian tinker's design was still clever: the steam-driven mechanical wonder actually danced, albeit just one clumsy pirouette after another. When it came to a graceless stop, the guests snapped their fingers in appreciation. The faint sound of their applause drifted over the lawn, but the party continued on. With the grounds still empty, Aniri swung her aetherscope to the forest. The broken edges of the river snaked through the darkened trees, slipped under a stone bridge, and then flowed past the red sandstone walls of the Queen's estate. A black shape darted out from under the bridge, then disappeared into the shadows between the trees.

She peered over the edge of the balcony. No sense in being caught by someone who snuck out for a dalliance in the dark. With the way clear, she opened the leather satchel at her feet and uncoiled the sheet she had twisted into a rope. Always check your knots, Aniri. Her father's voice accompanied her on every climb, but she had to wonder what he would have made of this particular one. She rechecked the knots. It would cause quite a stir if she plummeted to her death while climbing down the palace wall.

The massive stone lion that guarded the parapet served as an excellent anchor. She looped the rope around it, then stood on the edge of the wall and leaned out over the blackness. Loop the rope under and between your feet, Aniri. It will carry your weight. Practical advice, but knots would impede her progress, and speed was of the essence. She lowered herself, hand over hand, bracing her feet against the wall. A mossy spot, hidden by the dark and slick with dew, sent her silk slippers pawing rapid-fire several times before she found purchase between the giant stone blocks.

Always use the proper equipment. She took a deep breath. Her father would probably disapprove of her attire. Silk nightclothes were hardly climbing wear, and she couldn't find any plausible excuse to wear her climbing shoes to bed. Her handmaiden, Priya, was far too clever for that—and already suspicious when Aniri wanted to retire to her observatory alone. At least she had her fingerless climbing gloves, and on every climb she wore the thin, braided bracelet her father gave her. For luck. She thought he would approve.

Hand over hand, Aniri continued her descent. Halfway down, a sudden clacking broke the quiet and rose above the scrapings of her slippers on the treacherous walls. She held still against the cool stone, hands gripped tight on her rope of sheets. A lone two-wheeled surrey ambled out of the shadows of the Samirian embassy and headed toward her dark corner of the Queen's estate. Aniri held her breath and silently cursed the full two-moon night. If the carriage came much closer, the occupants would surely see her clinging to the side of the palace like a spider on her thread.

The six-hooved beast pulling the surrey slowed as it neared the giant stone statue of Devkasera. The mother goddess of ancient Dharia loomed larger-than-life, threatening the carriage with a sword and a scroll—the powers of destruction and creation—clasped in two of her six hands. The Queen loved the ancient traditions, so the goddess held a place of respect in the middle of the palace lawns. Aniri preferred the clean streets and steam-driven inventions of modern Dharia to the unwashed feet and mystic religion of her country's past, but that didn't stop her from sending a silent prayer to Devkasera—for invisibility for herself or perhaps a sudden loss of sight by the persons in the carriage.

The surrey paused at the statue, then veered right and headed for the far wall that enclosed the estate. Aniri repressed a laugh—perhaps she should pray to Devkasera to bring her birthday sooner as well. Her arms ached from holding her position, but she waited until the carriage had passed through the palace gate. Beyond it, the lights of Kartavya, Dharia's capital city, winked through the coal-smoke haze as if giving her an all-clear signal.

Her muscles rejoiced when she moved again, working her way down the last half of the wall and dropping the final two feet. From there, she scampered over the surrounding manicured hedgerows as if she had fled the palace a hundred times before. Her unbound dark hair flapped behind her, and the cool night breeze fluttered her black silk nightclothes against her skin like a thousand butterfly wings. It was the feeling of freedom breathing against her, and she had to clamp her teeth against the giggle that threatened to ruin her escape.

She slowed and picked her way through the darkened brambles of the forest grabbing at her legs. The first time, she slipped away from dinner in her normal evening attire—a midnight-black corset latched with brass clasps, a starched skirt of blood-red silk, and a sweep of silk over her shoulder for the traditional touch the Queen required. Aniri thought the dark colors would ease her escape, but she had stuck to the needled branches like a royal pincushion. The second time, she cast aside the bodice and most of the silk, keeping only her short bloomers and camisole—essentially running through the forest in her unmentionables. That had been deliciously decadent, but also very chilly. This time, her nightclothes were proving the most suitable costume yet for midnight escapades.

She smiled and slipped through the forest like a phantom, black on black, silent and stealthy. The faint trace of coal smoke gave way to the fresh scent of leaves mixed with river mist. She breathed it deep: the lushness of it always captivated her. The Queen had imported trees and beasts from the barbarians in the north to recreate the Dharian forests long ago swept away by agriculture. Fortunately, her majesty favored the gentle animals sacred to the gods. Aniri was careful not to disturb a long-tailed bandir hanging from a branch, eyes closed and peaceful. She didn't believe the superstitions about waking one, but she couldn't afford the screech it would let loose.

Aniri broke out of the forest and onto the wet rocks bordering the river. The footbridge ahead was a silent sentinel over the constant chatter of the river. There was no sign of movement. Was she too late? But then Devesh stepped from the shadows, showing his face to the moons as if he had nothing to hide.

She skittered over the slippery rocks and flew into his arms.

"Aniri," he said, but she was uninterested in wasting precious moments with words. She shut him up with her lips pressed fiercely to his. He closed his dark, humor-filled eyes, and wrapped his arms around her. Being a courtesan, he was well-trained in courtly conversation, but the artistry of his lips moving slow yet urgent against hers made her forget her own name.