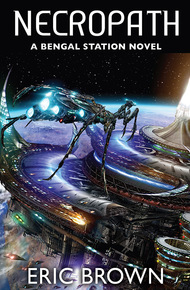 Bengal Station: an exotic spaceport that dominates the ocean between India and Burma. Jaded telepath, Jeff Vaughan, is employed by the spaceport authorities to monitor incoming craft for refugees from other worlds. When he discovers a sinister cult that worships a mysterious alien god, he's drawn into a deadly investigation. Not only must he attempt to solve the murders, but he has to save himself from the psychopath out to kill him.

Vaughan was about to cross the deck to stores and hand in his pin when he became aware of another mind, close by. He turned and stared at where he thought the mind should be, but the stretch of deck to his left was deserted. Then he had a blast of a kid's identity, his whereabouts, and the reason for his presence. The sudden flurry of images blazed in his awareness, threatening his own perception of self. Quickly he fumbled at the console at the base of the skull: he felt the thread of the pin unscrewing through bone, and the pain of having such a vibrant mind within his own ceased instantly. He slipped the pin into its case in his inside pocket, then traced the progress of the mind, now modulated to a tolerable hum, on its course beneath the plates of the platform.

He'd read the kid's apprehension at trespassing on the precincts of the 'port—even though he'd tricked the guards with the decoy of the cow—and he'd read something else, too. An image of a mutual friend in distress and the desire to reach him, Vaughan, with the news.

An inspection cover in the deck hinged open a grudging three centimetres, and a pair of jet black eyes stared out. "Mr. Jeff Vaughan! Please come with me immediately, right now!"

Vaughan glanced around the 'port, then knelt and hissed, "What's wrong with Tiger?"

"I am telling you that I don't know. Dr. Rao was telling me to find you immediately."

The boy blinked. "Yes, she is sick. She is wanting to see you immediately."

Without augmentation, Vaughan discerned no coherent thoughts in the boy's mind, just the vague music of emotions.

"Stay there. I'll be back." He set off at a sprint, crossing the deck to the terminal building, and handed his pin to the bored clerk in stores. He hurried back to where the boy was waiting and, ensuring he was unseen, slipped through the iron cover. He was in the lighted crawlspace between decks, hunkering down before the buck-toothed grin of a stringy Sinhalese boy in a chequered dhoti and a soiled vest.

"How the hell did you get in here?"

"No problem. I know all fastest routes around Station. That why Dr. Rao send me." As he spoke, his head rocked like a metronome and his grin expanded with pride. "Now we go. Follow me."

The kid turned and waddled awkwardly along the narrow crawlspace, oiled hair steaming in the heat of the occasional fluorescent. Vaughan followed, having to bend almost double to squeeze his bulk down the corridor. The lights increased the hothouse temperature. He felt rivulets of sweat trickle down his face. "What's wrong with Tiger?"

"All I am knowing is Tigerji is sick. Dr. Rao told me she want see you."