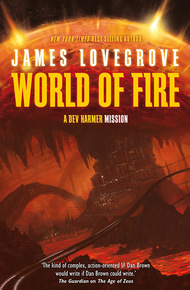 James Lovegrove published his first novel at the age of twenty-four and has since written more than 40 books. He has been shortlisted for numerous awards, including the Arthur C. Clarke Award, the John W. Campbell Memorial Award, and his work has been translated into 15 languages. In 2011 he became a NYT bestselling author with Age of Odin.

World of Fire by James Lovegrove

Dev Harmer, reluctant agent of Interstellar Security Solutions, wakes up in a newly cloned host body on the planet Alighieri, ready for action.

An infernal world, so close to its sun that its surface is regularly baked to 1,000°C, hot enough to turn rock to lava. But deep underground there are networks of tunnels connecting colonies of miners who dig for the precious Helium-3.

Polis+, the AI race who are humankind's great galactic rivals, want to claim the planet's mineral wealth for their own. All that stands between them and this goal is Dev. But as well as Polis+'s agents, there are giant moleworms to contend with, and a spate of mysterious earthquakes, and the perils of the surface where a man can be burned to cinders if he gets caught unprotected on the day side…

"Right," Dev said. He was hungry. Famished, in fact. The host form was pristine. It hadn't been fed yet. Fresh from the growth vat and craving nutrition.

Bilk nodded. "I was warned you were the straight-down-to-business type. The profile they sent me –"

"Is just some human resources crap. Piece of fiction. Reduces me to a bunch of bullet points and Myers-Briggs personality metrics. Doesn't mean a thing."

"The profile said that's exactly what you would say about it."

"Do you want to get on my wrong side, Mr Bilk?"

"Then don't get clever with me. Briefing. Come on. Why have I been inserted here? What's going on that needs the attention of an ISS troubleshooter?"

Dev felt a deep vibrato hum through the soles of his feet, a sound with a pulse, like a singer reaching some unfathomably low bass note. He gripped the edge of the gurney. It wasn't that he was going to topple over; more that he found it hard to keep his legs from crumpling.

"Right on cue," said Bilk with grim relish. "This is exactly the problem. We've been experiencing tremors just like that, and worse, more severe, on a regular basis. No one's sure what's causing them or what they signify. They don't appear to have any natural cause. Calder's Edge doesn't lie in a region of seismic activity. It would never have been built here otherwise. There's been nothing like this in all of Alighieri's known history."

"No geological evidence dating back to pre-colonial times?"

"Not as far as we can determine. It just seems that –"

And then it resumed, like thunder. The room heaved and yawed. Some titanic fist was punching, pounding, pummelling from outside. Walls appeared to flex, solid structures turning to liquid.

Dev and Bilk swayed, helpless as a massive force warped the world around them, seeming to bend the very air itself.

The earthquake – this was no mere tremor – rumbled on for a minute and more, merciless, relentless. Dev heard Junius Bilk screaming in panic, and wanted to join in. He kept reminding himself he had known worse – lived through worse. Some of the things he had seen, some of the things he had endured... By rights, life should have no terrors left in store for him.

But he wanted to scream, like Bilk. It was only through sheer willpower that he didn't.

An ear-splitting crack was followed by a tumultuous crash.

The ceiling broke and caved in.

An avalanche of rock gushed down from above, right on top of the two of them.