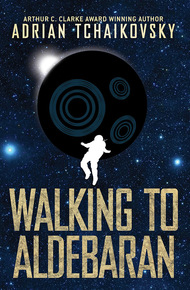 Other major works include Dogs of War, Redemption's Blade, Cage of Souls, the Tales of the Apt collections, and the novellas The Bloody Deluge, Even in the Cannon's Mouth, Ironclads and Walking to Aldebaran for Rebellion.

He has won the Arthur C Clarke and Robert Holdstock awards.

Walking to Aldebaran by Adrian Tchaikovsky

AND THERE'S SOMETHING HORRIBLE IN HERE.

I got lucky; when a probe exploring the Oort Cloud found a strange alien rock and an international team of scientists was put together to go and look at it, I made the draw.

I got even luckier. When disaster hit and our team was split up, scattered through the endless cold tunnels, I somehow survived.

Now I'm lost, and alone, and scared, and there's something horrible in here. Lucky me.

One day later – meaning: after I've slept again, although my personal sense of time suggests those periods are becoming more and more spaced out, but I will go quite mad if I cannot call things days and hours and minutes even if the words have no meaning outside my skull and so – one day later, I cross the invisible boundary into another aerome. The world smells faintly of something like lavender, and my lungs prick up their ears because the oxygen content is up, and also because there are several elements that humans would not normally want to be importing in bulk into the delicate, vulnerable linings of their pulmonary cavities. My lungs are omnivorous too, though. After all, what sort of a cautionary tale would Der Fliegende Holländer be if he could just drown?

I take a deep breath. I am a connoisseur of atmospheres. Oxygen, yes, mmm, good oxygen, a fine vintage. Nitrogen and methane, yes, very good, carbon monoxide slightly overdone, and I don't appreciate the sulphurous bouquet. I don't know about you, Toto, but this probably isn't contiguous with Earth, or anywhere that Dorothy might have gone. More suitable for the Tin Woodsman, but we have to keep going, don't we? I talk to Toto – if you hadn't guessed, you're Toto – I talk to you, Toto, because the Crypts are dark, like I said, and my own voice, croaky as it is, is soothing to me. When the echoes come back, I can pretend that I'm Toto and you're Gary Rendell, and we're having a fine old conversation.

I think I used to talk to you because it kept me sane, but we've rather moved past that stage in the relationship, don't you think?

But I've got a gut full of slowly digesting alien flesh and I can feel my metabolism shaking off the dust now I've got richer air to burn. And my eyes twitch and squint past the suddenly resurgent flame of my Clive-leg torch, because there's light ahead, real light. Not starlight, not sunlight, not firelight, but actual light, such as is made by sentient entities with a sophisticated technology. Most of the Crypts are dark as midnight, a horror of endless cold corridors cut in the stone where every step could see you into a trap, a drop, some peculiarity of physics, a reversal of gravity, a sudden drop in pressure or a toxic aerome.

Or the maw of a monster.

Because it's like Dungeons and Dragons in here, and you ever know a crypt without monsters?

And we split the party, and that's where the trouble started.