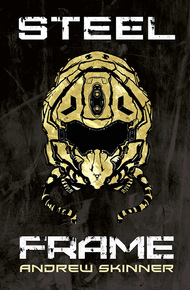 Andrew Skinner grew up in South Africa's coal-mining heartland, amidst orange dust and giant machinery. He now works as an archaeologist and anthropologist, interested in folklore, rain-making arts, and resistance; but the machines aren't done with him yet. Steel Frame is his first novel.

Rook is a jockey, a soldier trained and modified to fly `shells,' huge robots that fight for the outer regions of settled space. When her shell is destroyed and her squad killed, Rook is imprisoned, left stranded, scarred and broken. Hollow and helpless without her steel frame, she's ready to call it quits.

When her cohort of prisoners are sold into indenture to NorCol, a vast frontier corporation, Rook's given another shell - a near-decrepit Juno, as broken as she is and decades older - and sent to a rusting bucket of a ship on the end of known space to patrol something called "the Eye," a strange, unnerving permanent storm in space.

But they're not alone.

"Where are we going?" I ask, without thinking.

Hail watches me. "Does it matter?"

It does, I realise.

I spent three weeks on a windowless shuttle to get here, months before that to reach Kiruna station, wherever the fuck that was relative to everything else. The most of two years, if you count the time I spent in limbo, waiting for someone to buy my time.

All that, only to be dropped into the bowels of a ship that I didn't know existed, in a place that no one's bothered to name. I don't know where I am; not on this ship, not anywhere. I don't even know what the stars look like outside.

"It matters," says Salt, before I can reply.

Hail almost smiles. "All right. At this moment, we're standing on the starboard edge of Hangar C. You three are transferring to my unit, based in D-Lower."

"There are four hangars, then?" asks Lear. "Three more like this?"

"The NCSV Horizon has twelve master hangars, A through L, and they're all the same as this one. A through C are dry-dock and transitional, six corvettes and two destroyers apiece. D through F are where the shells live. G and H are the hives where the fighters hold up at night. The rest are modular bays, configured on demand."

"No," rumbles Salt. He steps forward, arms crossed over his chest. "I've never heard of a ship this size. Not even in the Authority. Not anywhere."

"Horizon is one of the original six; one of the dreadnoughts," says Hail, without so much as a blink, "and the largest warship ever built."

"But where the hell are we?"

The jackets step up, but Hail waves them down. "We are holding anchor in Open Waters, beyond the frontier. Where, exactly? I couldn't tell you. It's deeper than you've ever been before, and that's all it pays to know for now. The rest we'll fill in later, when you can handle it."

"Been swimming all my life," says Lear.

She meets our eyes, one after the other, but she doesn't give an inch. "You haven't been deep like this."

Lear bites back. "How would you know?"

"I know because Horizon is it. Because you are now further from the Origin System than anyone else in human history."

"Where?" asks Lear, his voice catching just enough for us to hear it.

"Wouldn't help if I told you."

The floor shakes, and another train appears in the distance, following another line through platform C. It howls past, a blur of white and turquoise, a rush of ozone-stink. Hail doesn't look back. She's watching the three of us, the wind catching streamers of her hair, tugging at the collar of her coat.

For a heartbeat, I catch the edge of something else. A scar, curved around her throat. Little bubbles of tissue where her skin snagged between the loops of a chainlink collar.

The train shrieks away, leaves us alone in the quiet.

"Because Horizon isn't on the map."