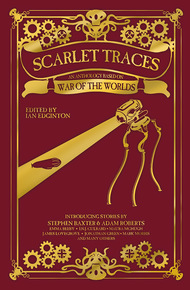 He is currently writing Batman'66 meets The Avengers (Steed and Mrs Peel, not the other ones!) for DC Comics as well as Judge Dredd, Stickleback, Helium, Kingmaker and Brass Sun for 2000 AD.

He lives and works in Birmingham, England.

It is the dawn of the twentieth century.

Following the Martians' failed invasion of Earth, the British Empire has seized their technology and unlocked its secrets for themselves. It is a Golden Age of discovery, adventure, culture, invention—and of domination, and rebellion.

A HUSH FALLS as the crimson curtains rise.

At the front of the small stage a motorised rooster perches. Painted shiny black and metallic orange, its head tilted to a starry sky, it opens its beak with a whirr of gears and emits a realistic crowing call for dawn. Above, the firmament shifts: the stars click shut, the colour shifts from midnight blue to azure bright, and a blazing sun sails upwards, lighting the stage and revealing it as a lurid, seething red: the awful Martian tendril tide sweeping across a rolling English landscape.

In the cramped auditorium the audience shifts and issues a light hiss. The invasion is a scarred memory despite the gap of a generation.

There is one hopeful spot untouched by the blight: a pool, shimmering. From it a jointed silver arm emerges holding a polished sword. It glows in the sunlight. A collective surge of hope rushes through the crowd, an awe-struck response to a mythic symbol of justice.

A cunningly-made puppet knight, in full armour, clanks onto the stage—the cockerel, frightened, spins across the front and off-stage in an amusing flurry of wings. In the background choral music swells, piped in from a gramophone recording. The knight falls to its knees in a posture of prayer: the sword takes flight and glides towards the knight.

Oooo gasps the audience, enchanted, wondering how the wires are not visible. The magic of the story remains intact.

The knight stands, seizes the sword, and brandishes it three times in the air. The arm disappears into the pool, and the morass of bloody Martian infection recoils from the knight, who moves further into the stage, lit by glorious purpose; behind its metal feet green grass and flowers emerge.

But a hideous cry rises, ULLA!, and a tall Martian tripod stalks onto the stage, pea-coloured smoke issuing from its articulated joints, glittering tentacles waving, and its baleful red eye fixed upon the small knight. Strapped to its back is a basket containing little people, their arms waving in distress.

Get the bastard! shouts one agitated man in a cracked, hate-filled voice.

A flare flickers in the Martian eye but the knight raises its sword in a defensive movement. A sizzle and the sword's blade glares as bright as the sun. The tripod staggers and one of its knees buckles, forcing its brazen hood closer to the earth.

The knight makes a supernatural leap atop the Martian's helmet. The tentacles whip at the champion but it swings its sword, and snap, the tentacles separate from the machine, to fall and flip on the ground like beheaded snakes. The knight plunges its sword into the head of the invader—it drops onto the ground and the red writhing carpet retreats completely. The basket snaps open and a man, woman, and child tumble out and stagger to their feet. They raise their arms to the sky in jubilation.