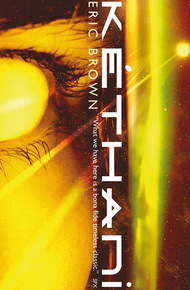 It takes an alien race to show us our humanity

When a mysterious alien race known as the Kéthani make contact with the people of Earth they bring with them the dubious gift of eternal life. These enigmatic aliens will change the course of the human race forever but also touch people's lives on a personal level, not least in a small town in the English countryside. But do the Kéthani have a hidden agenda and will the human race choose to evolve or turn in on itself in the face of this momentous revelation?

"Kéthani deserves to be read."

a One hour after the arrival of the towers, the next stage of the phenomenon occurred.

A bright white light, arching through the heavens in a vast parabola, fell and hit the summit of the obelisk. The light dazzled, and drew gasps from the surrounding crowd, but was in itself completely silent. It lasted merely seconds, and then was gone.

But I swore that the tower changed.

It had possessed some kind of life before, but— and maybe this was my imagination, playing tricks, or again a trick of retrospect— I was convinced that now the tower was possessed of intelligence.

We flocked to touch the surface of the tower, and I was flooded with a strange sense of wellbeing. I felt as if something, or someone, had attempted to communicate with me.

The arc of light had descended on the towers at the same instant all around the world, apparently. The radio reporter near Lewes was almost speechless as he tried to convey the effect.

One hour later, the cold getting to us, Zara and I made our reluctant way home, turned on the TV—every channel was carrying the story live—and watched the unfolding of the greatest event in the history of the world.

Over the course of the next day we watched reports from hundreds of locations around the globe. It was as if the towers had been positioned systematically, equal distances apart, on every continent, country and island. We watched a succession of fazed politicians attempt the reassure their citizens that everything was under control, that there was no danger or threat from the towers. In some instances, it was obvious that the politicians were not believed, as angry mobs in Malaysia and Sudan rioted and attempted to burn down their respective towers. When the flames and embers died, it was revealed that not the slightest damage had been done to the unearthly constructions.

Precisely one day after the arrival of the towers, the heads of every country in the world appeared live on television and gave more or less the same address.

They had, they reported, been contacted by the agents responsible for the imposition of the towers. The agents were extraterrestrial in origin, and hailed from the planet orbiting the star Delta Pavonis, almost twenty light years from Earth. They called their planet Kéthan. They had come in peace, and reassured the citizens of Earth that there was absolutely no cause for concern.

It was not reported how the aliens had made the contact and communicated their message, which fuelled wild speculation in the press for twenty-four hours. Sources close to the world governments let slip that officials had been in meetings with impeccably dressed humanoids shortly before the Kéthani, as they came to be known, issued their communiqué to the world. Later, government officials across the world denied that they had had face-to-face meetings with the Kéthani, and the accepted story now is that all communications were via televisual links.

Two days after the arrival of the towers, newspapers, television and radio were running stories that asked the obvious question: what did the Kéthani want from Earth?

The answers, depending on the quality of the paper you read, ranged from scare stories straight from B-movies along the lines of The Invasion of the Body Snatchers to more peaceful scenarios that cast the aliens as Messiah figures come to put the planet to rights.

Three days after that fateful noon arrival, a tired-looking prime minister went on air and addressed the British nation.

Something in the expression on the man's face, a kind of manic euphoria combined with exhaustion and perhaps a dash of disbelief, told me that this was what we had been waiting for.

I gripped Zara's hand as we sat side by side on the sofa and watched with mounting incredulity as the leader of our country stared into the camera and told his citizens why the Kéthani had come to Earth.