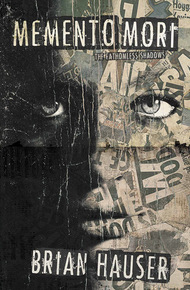 BRIAN HAUSER is a writer and filmmaker from Carter-era rust belt suburbia. He lives in central Pennsylvania with his partner and two cats.

Underground filmmaker Tina Mori became a legend in the late 1970s with a stolen camera, a series of visionary Super 8 shorts (The Eye, The Stairs, The Imperial Dynasty of America) and a single feature film, heralded as her masterpiece, Dragon's Teeth. Then she disappeared under mysterious circumstances. Was it foul play, or did Tina Mori go somewhere else? And if so, where? Could it have been the otherworldly Carcosa so often referenced in her films?

Through many layers, including letters, a 'zine made by a teenage horror film fan, and a memoir written by Mori's college roommate and muse, film historian and debut novelist Brian Hauser delves deep into Tina Mori's life and legacy, exploring the strange depths and fathomless shadows situated between truth, fiction, fantasy, and the uncanny.

Fans of nested narratives, Super-8 films, Chambers' the King in Yellow mythos, and zines will want to check out Brian Hauser's debut. Ross Lockhart says, "Brian Hauser pitched Memento Mori: The Fathomless Shadows to me as a work in progress at the H. P. Lovecraft Film Festival in Portland a couple years ago. I told him then that if he could pull it off, I'd love to publish it. Needless to say, he did. I only regret not being able to share this one with Joe Pulver, Sr., as he was too ill to read it when we published the book. But I like to think that Joe, in Carcosa somewhere, would have loved this book as much as I do."

Several years ago, I was deep into a research project on horror fanzines when I came across a copy of issue #3 of Billie Jacobs's Final Grrrl in the garage archive of a private collector in New Paltz. It stuck out, to say the least. In a small zine sub-sub-culture dominated by male fans, Final Grrrl pulses with a fierce feminist punk excitement that radiates through its fan musings like veins of lightning. It was not unusual, as some might think, to find a female fan of horror films, but it was the first time I had found a horror zine entirely authored by a woman. I should say a young woman. Billie Jacobs was barely fourteen when she mailed out issue #3. She was a first-year high school student in Rochester, who was reveling in her love of horror movies by sharing that enthusiasm with a far-flung community of zine readers and creators. I wanted to read more of her work, but that was the only issue in the garage.

Even though the issue was almost twenty years old, I gambled that someone at Billie's old address would know how to get in touch with her. I often found that going to the source was the best way to track down back issues of zines. Even if authors didn't have any copies left, they could usually point you in the direction of people with good collections. But when I searched for Billie and the mailing address that she listed in the back of the zine, I soon discovered a sad story. Billie had gone missing in the spring of 1996, just a couple of years after she published issue #3. I read the few, brief articles about her disappearance, but since the authorities never found her, there was no follow-up. I set that avenue of research aside and kept an eye out for more issues in other collections and outlets. I was able to buy issues #1 and #4 from online outlets, but #2 and any others remained elusive. Zines often do not follow a regular publication schedule, so there was no telling if there was a #5 or a #6 or more.

What I did see from the issues I had was a young voice growing in confidence and intelligence as she matured and honed her expertise in horror films. Billie was no prodigy, but she was a bright young woman who found a passion for art and a refuge from the slings and arrows of adolescence in an imagined community of horror fans and Riot Grrrls. Knowing that she was gone, I felt a growing obligation to collect her work, preserve it, and possibly find a way to present it to a broader audience.

I found fewer and fewer leads on the remaining issues of Final Grrrl, and eventually I decided to contact the Jacobs family. I had never before had to make such a delicate approach in my research, and I hesitated for some time. However, the pressure to publish will motivate the most timid among us. Billie's parents split a few years after her disappearance, but her mother kept the Sears craftsman bungalow the family shared. Like many devastated parents before her and since, she has been unable to touch Billie's room beyond occasionally dusting it. Over the course of several months, she and I progressed from telephone conversations to an invitation to the house. I shared the copies of Final Grrrl with her that I had collected, and I learned more about what Billie's parents thought of her obsession with horror films. Though both her father and mother prohibited going to rock shows and parties where there might be adults and drugs and drinking, as long-time Kodak employees they were more sanguine about movies, especially when it came to Billie watching VHS tapes at home. They did not actively encourage her hobby, but they did not discourage it either, and her part-time job at her uncle's copy shop seemed to provide her with the spending money she needed for it.

On my second visit to the Jacobs home, her mother offered to let me look through Billie's room. In her closet, behind a battered pair of combat boots, I found what I was looking for: a white cardboard file box. I lifted the lid and saw an unruly stack of zines. I hauled the box out, registering as I did that one of the floorboards it sat on was loose before I set the box on the floor in the middle of the room. I imagined that this was where Billie spread out her zine making supplies many nights as she drew, cut, and pasted her pages. In the box, I found a small treasure trove of horror and Riot Grrrl zines, some of which I had seen (Chainsaw, Girl Germs, Bikini Kill), while others were new to me. I found an issue #2 of Final Grrrl to round out what I had, and I also found two or three (it was difficult to tell at first) master pages from issue #5, but there was not a complete issue in the box. I laid the materials out on the floor and took photos of every page as quickly as I could with my phone. I did not want to overstay my welcome, and the guilt from my selfishness was beginning to loom over me. I packed the box back up as neatly as I could and returned it to the closet. As I did, I recalled that the floorboard had been loose, and I froze. I could not ignore the hunch I had that this was Billie's hiding place. I had to gingerly work the plank back and forth before I figured out how it came away, but I was rewarded with a thick manila envelope hidden between the floor joists.

Inside the envelope was a complete issue #5, a dog-eared copy of C.C. Waite's Memento Mori, and a letter written on a stack of yellowing motel stationary, all bound with a disintegrating rubber band that crumbled at the first touch. The envelope itself was addressed to Billie at her home address with a return address from Dr. C.C. Waite in Columbus, OH. The postmark was March 1996, the same month that Billie disappeared.

This discovery was something else entirely. Though my mind was reeling in a dozen directions, one of the most obvious was a certainty the police had never seen this envelope or its contents. By the time I opened it and looked through the contents well enough to get a sense of them and realize they were very likely evidence, my fingerprints were already all over the documents. After an initial surge of panic, I calmed down enough to think about what I ought to do. I decided the only thing to do would be to tell Ms. Jacobs and to urge her to share this material with the police. I knew that I held the pieces of a mystery in my hands, but for a moment I was also clear on who I was. I was a horror film scholar in the house of a grieving mother, and I was already taking advantage of her. First, though, I laid out issue #5 and photographed it and then did the same for the typewritten letter. The book was too long, but I was confident that a photo of the publisher's information page would lead me to another copy.

Ms. Jacobs did turn the documents over to the local police, who re-opened their investigation into Billie's disappearance. The fact that Waite had been in contact with Billie from Ohio, and so close to her disappearance, prompted the local PD to transfer the case to the FBI. Despite her renewed faith in answers, Ms. Jacobs was destined to be disappointed. After a year of hearing nothing, the FBI agent in charge of the case informed Ms. Jacobs that the new leads resulted in no clearer information about what happened to Billie, though they had a new theory. It turned out that C.C. Waite had disappeared at roughly the same time. She had taken a medical leave from her teaching job at a small liberal arts college in central Ohio in the winter of 1996, and after she failed to show up for a number of social engagements with friends and colleagues, a welfare visit revealed that her house was empty. Given this information, and the content of some of the materials in the envelope, the FBI thinks it is plausible that C.C. Waite and possibly Tina Mori lured Billie Jacobs away from home. New information led investigators to contact Interpol but to no avail. Waite, Mori, and Jacobs all remain missing to this day.

Ms. Jacobs approached me about publishing these materials, since I let her know that I took images of them for my research. Having read through them at greater length, I was reluctant, even though the original publisher of Memento Mori was all-too eager to see a new printing of Waite's memoir. At first, I thought I was still feeling guilty about reopening these wounds of hers, but later I had to face the fact that there is something else in these documents that both fascinates and repels me. There is a nameless fear pressed into these pages, something that threatens to unleash itself with each reading. But like seeing a caged predator, there is something that draws you to the bars to look in awe. It is only my faith that the bars are solid that allows me to invite you to stand by my side while we both look upon the madness within. That madness is in my dreams now, where I cannot look away.