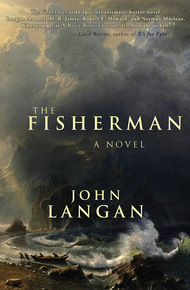 JOHN LANGAN'S most recent book is a collection of stories, Children of the Fang and Other Genealogies.He lives in New York's Mid-Hudson Valley with his wife, younger son, and not one, but two dragon puppets.

The Fisherman by John Langan

In upstate New York, in the woods around Woodstock, Dutchman's Creek flows out of the Ashokan Reservoir. Steep-banked, fast-moving, it offers the promise of fine fishing, and of something more, a possibility too fantastic to be true. When Abe and Dan, two widowers who have found solace in each other's company and a shared passion for fishing, hear rumors of the Creek, and what might be found there, the remedy to both their losses, they dismiss it as just another fish story. Soon, though, the men find themselves drawn into a tale as deep and old as the Reservoir. It's a tale of dark pacts, of long-buried secrets, and of a mysterious figure known as Der Fisher: the Fisherman. It will bring Abe and Dan face to face with all that they have lost, and with the price they must pay to regain it.

John Langan's Bram Stoker Award-winning The Fisherman refuses to pick sides. Come for the supernatural horror, stay for the prose—oh, the prose! Ross says, "John is a consummate storyteller, and his encyclopedic understanding of The Weird comes through wonderfully in The Fisherman."

An Excerpt from The Fisherman

(In which the narrator, Abe, dreams of his dead wife, Marie. And other things.)

Later that night—technically speaking, it must have been the next morning—I had a nightmare, the first since Marie died. As a rule, my dreams had been of the mundane, this-is-what-I-did-today variety. Seldom, if ever, did my mind conjure any strange, exotic dreams, any dream-like dreams. I've always been this way. Truth to tell, I used to sort of envy those folks who dreamed they were on great adventures, or having passionate love affairs, or dining with famous people. To me, those dreams seemed like starring in your own private movie. This dream was no happy Hollywood extravaganza. It was the kind of film you want to turn off but can't, because switching it off would mean standing up from the couch and crossing the living room, and you're literally too scared to do that. It seems like a tremendous risk. But that's not all, no. You're fascinated, too. So you sit there, unable to stop watching, knowing full well you'll regret your failure to change the channel later, when you've pulled the bedclothes up over your head and are praying that the creak you heard outside the bedroom door was the house settling, not a footstep.

In the dream, I was fishing. I want to say it started out normally enough, except that isn't true. I was standing beside this narrow, winding, fast-moving stream. When I say it was fast-moving, I mean the water was frothing, the way it does after a torrential storm. I couldn't see into it at all. To my left, the stream descended from a steep hill. To my right, it foamed on level for a dozen yards before dropping away. In front of me, across the stream, the other shore rose steeply to a dense line of evergreens. Behind me, the ground also sloped up to a heavy cluster of trees. Overhead, the sky was pure blue, the sun dazzling. Despite the sunlight, the trees across from me—not only the spaces between them, but the trees themselves—were dark, not simply in shadow, but truly dark, as if they'd been shaped out of night itself. Standing there at the edge of that raging stream, rod in hands, line cast, I could not take my eyes from those trees, those dark trees, even though looking at them gave me the most intense vertigo, as if in looking over at them I were looking down a great distance, into a deep chasm. What was worse, I could feel myself being watched, could feel the eyes of things at the edge of the trees, and of things much farther in, which I somehow knew were bigger, much bigger—I say I could feel those eyes, their gaze, like a swarm of insects crawling all over me. A scream was building in my throat. I was on the verge of tossing my gear and bolting, when something took my line.

The rod bowed with the force of it. Line started to run out, and run out fast, faster than I'd ever seen, making the furious sound you hear on one of those shows about deep-sea fishing, when a marlin or a swordfish takes the bait. It ran out fast, and it ran out long, as if the fish I'd hooked had decided to dive straight down, down much deeper than I thought a stream this size could be. Afraid to grab the handle in case the line snapped, (and wondering if that would be such a bad thing), I held the rod. My catch dove ever-deeper; the line sizzled out. Abruptly, whatever I'd hooked stopped dead. I hesitated, waiting to see if it was only pausing. Nothing. I started turning the handle. For what seemed like hours, I wound that line back in, drawing in more of it than I could have had. Even in the depths of the dream, I knew this. Apart from a brief tug, which immediately stilled my hand, until I'd determined I wasn't going to have a fight on my hands, and went back to winding the reel, my catch was limp, passive. For the life of me, I couldn't figure out what kind of fish I'd caught. I'm no expert, not by a long shot, but I'd never heard tell of a fish that took your line, dove straight down with it until, apparently, it exhausted itself, then allowed you to draw it in with no further struggle. For the matter, I'd no idea what stream this was, that let my mystery fish dive so deep. The landscape resembled the Catskills, but where in the mountains, I didn't recognize.

I can't say how exactly I knew what I'd hooked was drawing closer, since I couldn't see through the seething water, but know I did, and along with that knowledge came the sense that all those things in the trees around me were holding their collective breath, eager, anticipating what, I didn't know. As what was on the other end of my line broke the water's froth, time slowed. I saw something dark, swirling in the water like so many snakes. No, not snakes, more like some kind of plant, seaweed. No, not seaweed, more like hair, like a headful of hair. It was hair, thick and brown, soaking, hopelessly tangled. The hair parted to either side of a high, pale forehead, and long, narrow eyebrows arching over closed eyes. I knew, at that moment, even before I saw her high cheekbones, her sharp, almost pointed nose, her mouth that was the only feature out of proportion on her face—two sizes too small, I'd teased her—her mouth, through whose upper lip the barbed hook of the fly had slid and from which my fishing line now dangled. There was no blood. Instead, black, viscous liquid smeared the wound. I stood there, looking at my wife, at my poor, dead Marie—I still knew she was gone from me—I stood on the side of that dream-stream holding onto that rod tightly, desperately, because I couldn't think what else to do. Half of me was so terrified I wanted to fling that rod away and run, no matter if it meant finding out what was waiting in those evergreens. Half of me was so heartbroke I wanted to fling myself into the stream and grab her, hold her before she could slip back to wherever she'd risen from. I might as well have lost her five minutes ago, the pain was that sharp. Hot tears poured down my face like there was no tomorrow.

Then she opened her eyes. I whimpered, that's the only word for it, this high-pitched noise that forced its way out of my mouth. Marie's eyes, her warm, brown eyes, which had held so much of passion and kindness, were gone, replaced by flat, yellow-gold disks, by the dull dead eyes of a fish. As she stared impassively up at me, I was suddenly seized by the conviction that, if I were to haul her out of the raging stream, I would find the rest of her similarly transformed, her lovely body given over to rows of slime-crusted scales and sharp fins. My arms and legs, and everything in between, were shaking so badly it was all I could do to keep standing where I was.

Her lips parted, and Marie spoke. When she did, it was faint, as if she were simultaneously calling to me from across a vast distance and whispering in my ear. "Abe," she said, in what I recognized straight away as her voice, but her voice with a difference, as if it were coming from a throat that wasn't used to it anymore.

I nodded to her, my tongue dumb in my mouth, and she went on in that same distant-close way. "He's a fisherman, too." Her words were slurred, from the hook piercing her lip.

Again, I nodded, unsure whom she was referring to. Dan?

My lips trembling, I mumbled, "M-M-Marie?"

I couldn't understand her answer, a word the hook tugging her lip wouldn't let her get her mouth around. The word, or name, collapsed in the saying, a mess of syllables that I thought sounded German, or Dutch. "There fissure"? That was what it sounded like. Before I could ask her to repeat it, Marie said, "What's lost is lost, Abe."

"The who?" I said, still trying to piece together those syllables.

From the spot where my lure pierced her lip, a deep gash raced up her face into her hair, splitting her skin. As I watched, horrified, the edges of it peeled away from each other, revealing something shining and scaled underneath. I cried out, stumbling backwards, and without a backward glance Marie dove beneath the rushing white stream. The fishing line, locked in place, tightened, pulling me headlong toward the water, my hands unable to release their grip on the rod. A half-dozen lurching steps, and I was at the water's edge, which bubbled and danced like a thing alive. I knew, with dream-certainty, that under no circumstances did I want to venture any nearer that stream. I was dizzy with fear, of Marie, of whatever was in there with her, of the very water itself, which chuckled and laughed at my desperate struggle to avoid it. I fought furiously, digging my heels into the sand as I was dragged forward. For a moment, the line relaxed and, fool that I am, so did I. This meant that when the next big tug came, I flew headlong into the white water and open mouths full of white teeth, rows and rows of white teeth in white water, and beyond them—