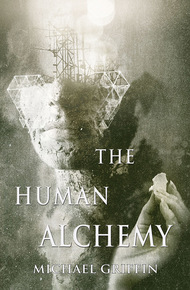 MICHAEL GRIFFIN'S latest book is the novella Armageddon House (Undertow Publications). He previously released the collections The Human Alchemy (2018 Shirley Jackson Award finalist) and The Lure of Devouring Light with Word Horde, and the novel Hieroglyphs of Blood and Bone from Jourrnalstone. His stories have appeared in Black Static and Apex magazines, and the anthologies Looming Low, The Children of Old Leech and the Shirley Jackson Award-winner The Grimscribe's Puppets. He's also an ambient musician and founder of Hypnos Recordings, a record label he operates with his wife in Portland, Oregon. He blogs atgriffinwords.com.

The Human Alchemy by Michael Griffin

Heralded as one of the leading voices in contemporary weird fiction, Michael Griffin returns with his second collection, The Human Alchemy. Here you will find eleven magnificent tales of the strange and sublime, the familiar and the disquieting, where dreamlike beauty and breathtaking horror intertwine. Featuring an introduction by S.P. Miskowski.

Expect the unexpected when reading Michael Griffin. "There is a moment in every story where the floor drops out and the familiar and comfortable becomes strange and uncanny. Call this sophisticated horror for readers seeking something original," says Ross Lockhart.

Bay wakes on the living room floor amid mounded clothing pulled from the bedroom closet. The house stripped of furniture, the kitchen lacks food. Even after a night spent endlessly slow-falling through black tar, Bay aches to retreat into sleep, to face the intolerable panic moment before death.

The new reality won't be blinked away. Sunlight blazes through bare windows, reflects on glossy hardwoods. Everything Bay owns, aside from the pile of shirts and jeans on which he slept, leans against the wall. Twenty large canvases, tortured visions in black, umber and gray. Bins of crushed and depleted tubes of oil paint. Jars of solvent, thinner, a few brushes. The room in which he painted, until yesterday, stands empty as the rest.

He contemplates a fresh canvas, mixing pigments, trying to organize color into some sort of clarification. Lately his painting's been work-for-hire, no time left for himself. The job's finished. Annie's gone. His future is nothing, a vacant expanse.

Taking everything, shutting off power, that's Annie's message. He hears her voice.

All you need is art, so I'll take the rest. See how you do, just you, your ratty jeans and boots, and your fucking art.

She's right. He's stuck. A house he can't pay for, a wardrobe more suited to a college kid than a man almost forty, and a pile of what Annie calls your primal scream paintings. The only thing left is her note.

Just go. Our accounts are all closed. I'm with him now.

Art always trumped everything, an all-important matter of depth and complexity amid life's shallower trivialities. Now Bay feels embarrassment at this self-indulgent conceit. Art, a child's game. What's it ever gotten him? Three gallery shows, twelve canvasses sold. No options, no hirable skills, no money for a new place. Nothing to eat. Worse than hunger is the shame. Even if he had somewhere to land, he can't drive. Collecting the money owed him by the theater would mean facing the man who took his wife.

Bay sees her point now. A man's able to take care of himself, his wife. If he can't do those things, he's just a child. Worse, a joke.

Hopelessness, a gaping chasm. Recognition of his future, a dawning chill. Like blood slow-trickling from a vein, life's warm pulse replaced by icy fear. Bay envisions the bridges of Northeast Portland, questioning his own seriousness even as the thoughts occur. Would he really go there?

The bridges aren't high enough. He laughs. So lame, predictable. What options are left? He shivers.

From his pocket, the cell phone rings. He's forgotten it, assuming she'd cancel the service. The only numbers programmed in are the last two people he'd ever call. The incoming number seems familiar. 541, somewhere south.

"Bad time?" Petersson sounds like he's anticipating a joke. "Sorry it's been so long. You know the grind, buying wood, selling wood. Thing is, Minerva called out of the blue, told me to invite you—"

"Divorced, yeah. Both of us traveling. One time, she didn't come back. Anyway, hill party's this weekend. Minerva says, make sure you come."

How to say the words? If Minerva left, Petersson will understand. "What's the hill party?"

"Shit, Minerva said something's up with you." Petersson's tone shifts. "She always said, if just once I'd believe... Anyway, listen, I'm driving up. You still at that bungalow in Irvington? Get your ass ready."

"I heard, but what's the Hill Party?"

"You visited Roseburg how many times, you missed every Mallard Hill Party? I'll be there in three hours."

Bay's hands tremble, as if in recognition of something averted.

"Thoughtful of you." Bay tips back the Jim Beam fifth. The bottle knocks the ceiling inside Petersson's posh gentleman's pickup. "I was gone just a few hours. She managed to empty the place. Must've hired—"

"I said, don't talk about that. Don't think about that." Petersson's driving, I5 South. Three hours to Roseburg. "Lesson I learned after Minerva skipped. Obsessively sifting back, through everything, that ain't what you need."

"Mental reboot." He grins. "Puke your troubles away at a two-day party."

"So this Mallard Hill place, it's where Erik and Minerva grew up?"

Petersson's grip flexes on the wheel.

Bay tries again. "The worst thing about Annie leaving, I finally did what she wanted. Took a commission, murals for Cinema 21, that's an art theater in Northwest."

"I know, dummy. Film major, remember? You took us there." He exhales. "Seven Samurai. Me and Minerva."

"Lumber baron with a film degree, that's funny. Most of us liberal arts guys..." Bay stops. Another swig. "Annie set it up, knew the owner. They kept showing up, checking on me. Arrive together, leave together."

"We weren't going to talk about that."

Bay thinks, What else? "So Erik grew up on this hill, but won't attend the big drunk-fest?"

"Nah, he stopped that recovery shit. After he withdrew from us, his sponsor tried to make him cut off Minerva." Petersson shrugs. "Erik only drinks beer now. Lives on the edge of the Mallard tract, a cabin overlooking the South Umpqua. Started some river guide thing. Fishing, rafting." His face clouds. "Minerva's in the main house. Stopover from the endless touring."

"So much land, Erik gets his own corner." Bay resists redirecting toward Minerva. Petersson's breakup makes him feel less awful.

"Might be the most impressive parcel in Douglas County. Everyone thinks Old Mallard got rich in lumber, but Minerva let slip he returned from the Merchant Marines, World War II, a millionaire at nineteen."

"Merchant Marines, is that still a thing? Maybe they'd let me—"

"He climbs aboard the post-war lumber boom, builds Mallard Hill. Meets a woman up in Washington, on business near Olympic Forest. This first wife starts him jetting around, blowing millions in Mexico. Spends the sixties and seventies financing films, legendary stuff by Buñuel and Jodorowsky."

"Lest I forget that film degree."

Petersson makes an undignified snort. "Always trekking the wilds of Mexico, South America, Antarctica, returning rejuvenated, trailing new wives to replace ones who die of typhus or malaria. Finally disappears, the Chilean Andes. Erik and Minerva, living under Old Mallard's tutors and housekeepers, assume they're orphaned a second time. Everyone gives up hope."

"He reappears, head shaved, silent as a mystic. No explanation where he's been ten months, what happened to wife number six, seven, whatever. Thereafter, no more film production or travel. Grabs another wife to replace the one rumored frozen to death. Further expands the house. His only indulgences are these parties, and the visiting artists, visionaries and occult weirdos. Some remain months, years at a time. Old Mallard, he's like fucking Tom Bombadil. Erik grew up thinking the man's his grandfather, later learns, no, it's great-grandfather."

Bay stifles envy at such a life. "One part Dos Equis' Most Interesting Man in the World, one part Kwai Chang Caine."